There comes a point in any super-fan’s lifetime when his or her enthusiasm for a fantasy world compels that fan to express that exuberance in the physical world.  If you’re at that point then you simply must consider picking up then adorable new figures by Funko.

You may have already seen their [amazon_link id=”B007F1U75K” target=”_blank” container=”” container_class=”” ]Marvel’s Avengers series[/amazon_link] online or at your local novelty store.  These are very similar in nature but feature some of the biggest characters in the world of Westeros.  Funko was nice enough to send us the complete set so here’s the lineup right out of the box: 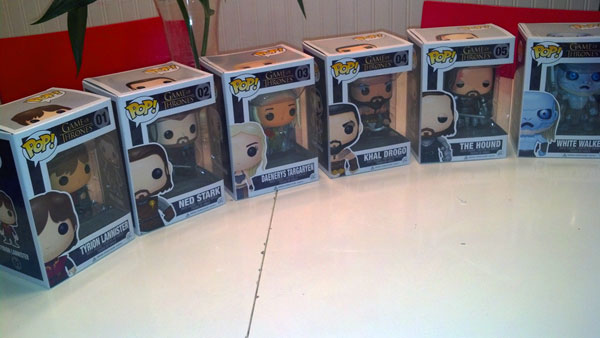 As you can see the cast of characters includes Tyrion, Eddard, Daenerys, Kahl Drogo, The Hound and a White Walker!  We’re not sure if Funko is planning on releasing other favorites in the future but we assume that if these sell well this Holiday we could see others (Jon Snow anyone?!).

Some of the figures are a bit more detailed than others.  Dany, for example has a dragon on her shoulder.  Ned and The Hound both have swords while Tyrion doesn’t have so much as a book.  Each figurine is essentially a static vinyl body with an over-sized rotating head which is the only moving part on the piece (no, Lord Stark’s head is not meant to be removed). 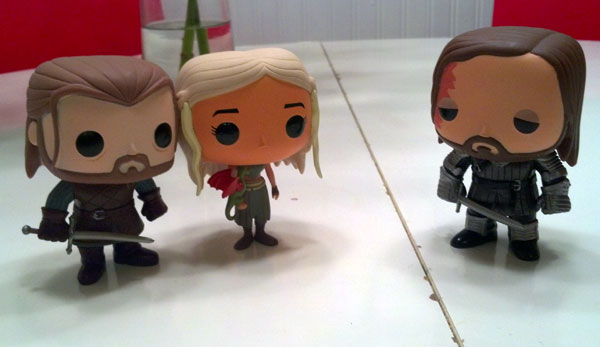 I could easily see these figures on a Game of Thrones fan’s desk at work, tucked away on a bookshelf or displayed proudly next to your Blu-Ray collection.  For a cost of around $10 each this is an easy stocking stuffer or office mate gift that would surely please any fan of A Song of Ice and Fire.

You can pick them all up on Amazon or the HBO Store and get them in time for Christmas.  Come back and post pictures of your new toys after you’ve received them!