‘The Gift,’ like much of this season, is a culmination of awesome, attention-grabbing scenes along with a number of head-shaking disappointments. Season 5 has certainly been a roller-coaster ride, especially for book enthusiasts who have no idea where the storylines are heading. A number of characters and storylines have been left out, changed, adapted, or held true to the source material. Ok, that last part was bullshit, but I’ve said it over and over again — Weiss and Benioff always manage to get the characters from A to B, they just happen to take certain liberties as to what happens on that path. So the snowball effect continues with Episode 7. The tension and conflict and plots have another week to come to fruition. In the meantime, let’s take a look at some of the best and worst moments from ‘The Gift.’ 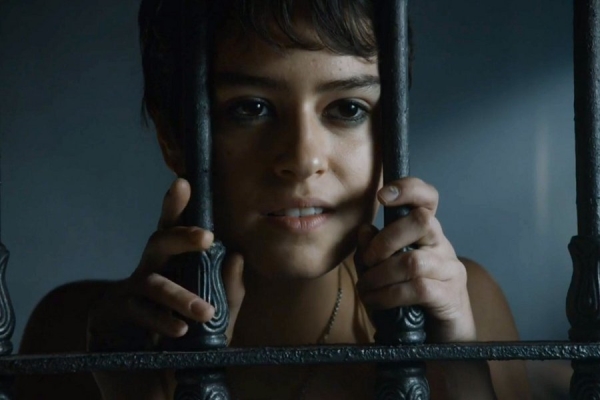 Dorne has been under fire from Game of Thrones fans all season, and rightfully so. Not only is the story and writing some of the weakest in the season so far, but it’s also marred by less-than-stellar fight choreography. Myrcella is still too young and ignorant (and in love) to realize the danger she is in remaining in Dorne. Meanwhile, Bronn has a deadly encounter with Tyene Sand in the cells below the Water Gardens. These scenes just come across as space-fillers. What I don’t understand is why Prince Doran hasn’t been featured more in this season. Alexander Siddig is by far the best new cast member to the Game of Thrones community, putting him center-stage would really help this storyline.

Up north is where things are starting to get interesting. Jon Snow is off with Tormund Giantsbane to bring the Wildlings across The Wall. As Jon sets sail, Sam Tarley comforts Maester Aemon as he breathes his last breath, one of the few natural deaths we’ve ever seen in the series. But the most captivating northern storyline, to me, lies with Stannis and Ser Davos. Stannis is at the end of his rope. Winter is coming, and everyday his army grows smaller and smaller. With the odds continually shifting against him, Stannis turns to Melisandre for help, who tells him that victory is only attainable through King’s blood. Stannis must sacrifice his daughter if he wishes to take Winterfell. The north has been relatively quiet this season, everything is in a perpetual state of conflict-building. That may be the same story here, but at least the pieces are now in place. Jon is off to meet the Wildlings, Stannis and Davos are on the war path, and now Melisandre’s sacrifices are having a direct impact on her King. 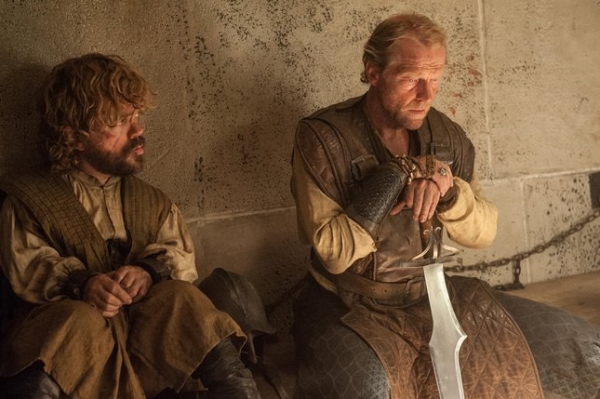 One of the most disappointing sequences of the entire season was the fighting pits of Meereen. Jorah and Tyrion have been sold to fight in the pits. Daenerys’ disgust for the brutal fighting matched my disgust for the set design and fight choreography. All season long we’ve heard of the glorious fighting pits, where slaves go to win their freedom and have their names remembered forever. Perhaps I was expecting more of a colossium-esque set, but what we got lost night was drastically underwhelming. We didn’t even see the crowd, the pit was no larger than a community swimming pool, and the revelation of Tyrion’s identity to Daenerys was hardly worth remembering. To all you book fans out there, I hope you’re as upset as I am for missing out on perhaps the best scene of book 5. I thought killing off Ser Barristan was one of the biggest mistakes of the season, this one might surpass that. 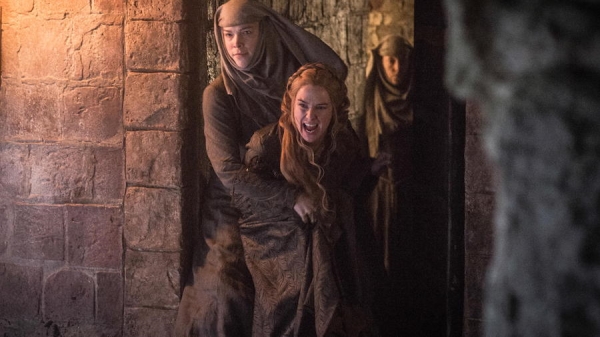 The best storyline of Season 5 is happening in Kings Landing, and things are really starting to take off. The Queen of Thorns is unable to convince the High Sparrow to release her grandchildren, and now Queen Margery and Ser Loras are imprisoned beneath the Sept of Baelor awaiting trial. The episode climaxes with the High Sparrow finally unveiling his master plan — to rid Kings Landing of the corrupted families. Lancel Lannister has divulged all of Cersei’s secrets, and now it is her turn to confess. I think the show has done a fine job with this storyline. There’s a reason the season started out with Cersei’s flashback, and now we see just how truly lost she is without her father’s leadership and guidance. The Lannisters and Tyrells are no longer feared names.

Here is next week’s trailer for “Hardhome.”