Tyrion has finally arrived at Mereen, appearing before Danaerys in her court. With a little persuasion, and what charm he can muster, he manages to get on her good side. Cersei is still locked in the dungeon beneath the Sept, being withheld from water by a callous Sister until she confesses her sins. Arya is making progress in Braavos, becoming a much more skilled liar as her training continues. And finally, finally, Sansa confronts Theon about her brothers and he admits to her that he did not kill them.

But what makes this episode eight, is what happened at Hardhome, where Jon Snow came to talk to the wildlings about making peace. The negotiations go about as well as they can, stubborn pride being a hallmark of northerners with pragmatism being a close second. Jon can’t unite the wildlings like Mance could, but he’s gotten through to some of them. But that’s when everything goes wrong. Dogs start barking. The wind changes. A haze of fog rolls down from the clifftops over the harbor and everyone starts rioting to get on the boats to cross the Shivering Sea. The gates are closed with wildlings left on both sides of it. The white walkers and their army of the dead have made it to the waterfront. Through the fighting, Jon needs to reach the dragonglass  he brought with him, left behind in one of the cabins, but when he goes inside he finds a white walker waiting for him. After showing its immense strength, Jon comes at it with his sword, and manages to strike the walker, shattering it like glass. He realizes that Valyrian steel can be just as effective as obsidian. But looking back at the harbor, now taken by the white walker with the crown of horns, he sees what humanity is up against when all the people who had died are brought back as blue-eyed zombies.

This was an episode of big moments. Dany made peace with a Lannister, the family she sees as usurper to her throne, promising that when she comes to Westeros she will break the feudal wheel that rolls over the common people. The Boltons are getting ready for Stannis’ men to break like an ocean wave against their castle walls. Cersei’s pride reduces her to drinking water from a puddle in desperation. The set piece at the end was the biggest. It was like an abridged version of the battle of Castle Black; we got to see giants, wilding’s unorthodox fighting, and another long take of the battlefield. From a production standpoint it was very impressive. After seeing the white walkers in their more tribal appearances, and when they didn’t wear shirts, it was a little off-putting to see one walk through the flames in black armor that was more reminiscent of a samurai. In that instance it made the scene a little more goofy than the seriousness of the situation may have warranted.

Am I the only one who thinks that Ramsay isn’t that good of a replacement for Joffrey? Sure they have similar “people are playthings” mentalities, but Joffrey’s was to another purpose. He was the lynchpin of the Lannister claim to the Iron Throne after Robert died. It’s his cruelty and exceptionably poor ability to lead that made him difficult to control by those in his family that knew what they were doing. In short, what made Joffrey interesting was the instability he brought to the people who were trying to maintain control. Ramsay isn’t like that at all. He’s a punk, he’s egotistical, but everything he does is for presentation. He doesn’t kill for sport he does it for entertainment. In the last episode, he could have flayed the woman who offered Sansa help and been done with it. Instead he paraded her to get an emotional shock out of his new wife. It makes sense in this instance because he wants to keep her in line, but it’s what he does with almost every person he kills. He never gets a sense of 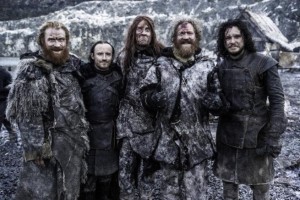 satisfaction from killing, he gets it from showing off to everyone how cruel he can be. Because of his last name he was always looking for a means to get attention from his father, and that’s how he did it. But Joffrey didn’t do it for attention. He didn’t need it since he was already the king. Ramsay’s just doing it for attention.

Did you find heavy metal band Mastodon (pictured with Kit) in the episode?

All in all a great episode. With only two episodes left, we’re still waiting to see how Stannis chooses to fight the Boltons, the trial (or confession) of Cersei Lannister, the fighting pits of Meereen, and what Jon is going to do to keep the white walkers from getting through the wall. Will Arya become a servant of the many-faced god? Will Sansa be able to escape from Ramsay? Only two more episodes until season five comes to an end and we can find out!  Here is a look at Episode Nine of the season – “The Dance of Dragons.”