Game of Thrones: The Complete Third Season will be available on February 18th on Blu-ray with HBO Select, DVD & Digital Download.  Pre-order your copy now for about [amazon_link id=”B00C8CQTJY” target=”_blank” container=”” container_class=”” ] $30 on Amazon[/amazon_link].

This box set is overflowing with exclusive bonus material including comprehensive guides, illustrated histories and an in-depth look at “The Rains of Castamere,” said to be one of the most discussed television episodes of 2013. I got to check it out a little early, so read on to find out all the details!

In the third season of Game of Thrones, the battle between the Houses of the Seven Kingdoms rages on. The fight for power intensifies, murder, betrayal and intrigue abound, and even more players enter the game. Season 3 is mostly based on A Storm of Swords, the third novel in George R.R. Martin’s A Song of Ice and Fire series, however – book readers beware – the writers of the HBO series have taken many liberties when converting Martin’s story for the television audience. While the first two seasons of the show somewhat followed along with the first two books of the series, the third season’s events were mostly drawn from the first half of book 3, which is nearly twice the length of the first two volumes. To make things yet more convoluted, story lines from later in the series of books were also brought into Season 3, thus the timeline of  Martin’s novels seems to be irrelevant to the writers at HBO. The writing team for the third Season consisted of Executive Producers David Benioff & D.B. Weiss episodes 1, 3-4, 6, 8, 9, 10, Bryan Cogman episode 5, Vanessa Taylor episode 2,  and George R.R. Martin episode 7.

Season 3 is made up of ten episodes which were filmed between July 10 and November 24 of 2012, and filming took place in several locations. Cast and crew returned to Northern Ireland, Croatia and Iceland, as well as adding new locations such as Morocco and expanding from two production units to three, with filming taking place in up to five countries, simultaneously. Six directors were used in season 3, Daniel Minahan episodes 1 and 2, David Benioff episode 3, Alex Graves episodes 4 and 5, Alik Sakharov episode 6, Michelle MacLaren episodes 7 and 8 and David Nutter episodes 9 and 10. 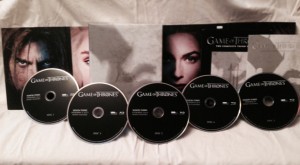 The Blu-ray with HBO Select includes all DVD features, plus: 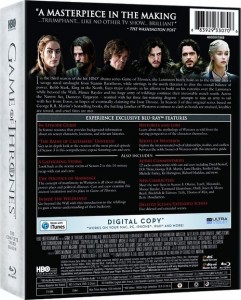 Overall, this is a really nice set, and fans of the show won’t be disappointed. I’m not overly impressed with the cover design of the box set, as it’s very plain, and when you slide the dragon sleeve over the box it looks weirdly blurry. The typography is attractive, though, and the inside fold out design looks decent. Fans will recognize the inside photos from some of the Season 3 promotional materials.

One minor issue I had with the Blu-ray discs, themselves, was that the on-screen navigation was sometimes difficult to make out. I’ve got good vision and a 47 inch high definition tv with 3D capability, and yet I had a tough time seeing the menus at times. I’d like to see a bolder font next time, and this is something that I don’t remember having an issue with in the boxed sets for Seasons 1 and 2. Otherwise, I’ve got surprisingly few complaints, and I’d recommend Game of Thrones: The Complete Third Season pretty highly.

What is is about the boxed set that has you most excited? What do you think would have been better left out, and why? We’d love to hear your thoughts and opinions in the comments section, below. Check out these video clips while you wait for February 18 to arrive.

MJ Snow is an avian behavior specialist, animal activist, role player, blogger and writer.  A long time George RR Martin fangirl and Game of Thrones Addict, MJ spends way too much time in Westeros. MJ is the co-founder of The Snow Keep, a short story and fan-ficiton blog, and founder of  The Brothers Clegane, a Sandor & Gregor Clegane tribute blog. She also co-curates several other Game of Thrones themed blogs, as well as Empowering Animals, an Etsy shop which sells wristbands to raise funds for animal causes.