Stannis leads the way as things heat up in this week’s episode of ‘Game of Thrones.’ These past few episodes have left us wanting. It’s been hard to keep up with so many rapidly changing, and sometimes rather boring, story lines and characters. ‘Second Sons’ is tight and contained, no longer jumping all over Westeros. For me, it has been a relief. Our attention remains fixed on Dragonstone, Kings Landing, and the eastern city of Yunkai, giving us a more intimate understanding of motives, characters and story. We haven’t quite reached the climax of Season 3, but rest assured, ‘Second Sons’ is a refreshing change of pace.

We open with Arya’s failed assassination attempt on the Hound. She learns how the Hound saved Sansa during last season’s mob attack at Kings Landing. More importantly, she discovers that they’re riding to the Twins to meet with Robb and Catelyn. The sequence was short, sweet, and informative. This is something the show has been lacking in the past few weeks. It leaves me wondering if Arya will keep the Hound’s name on her lips as she stares into the fire.

We finally have our first glimpse of a royal wedding at Kings Landing. Predicatably, both the bride and the groom are unwilling participants. This looked like the most miserable wedding in the history of the Seven Kingdoms. Tywin exchanges harsh words with his drunken son while Cercei has hardly any words for her future husband. The tension is lifted with some mild humor, namely Lady Olenna’s family tree and Tyrion’s slurred insults. Everyone is in a foul mood, Lannister and Tyrell alike, save for good ole’ King Joffrey. After one of his cruel jokes things take a serious turn. For a while there I thought Joffrey was done tormenting Sansa (we haven’t seen it all season). Now, on her wedding night, he threatens to forcibly plant a child in her. But the King goes too far, one last attempt to humiliate his drunken uncle ends with a knife in the table and a very clear threat. Joffrey would have had his uncle killed right then and there if it weren’t for Tywin Lannister. And so the newlyweds retire to separate beds without incident.

With so much talk of weddings and matrimony this season I’m glad they finally got one out of the way. I believe there are still three more on the horizon. The wedding was a tough sequence to watch because the characters that are being punished are some of the only characters we empathize with. All the while, that little shithead Joffrey is going around with a fat grin on his face. Tyrion’s decision to keep his hands off Sansa did not surprise me in the least. He’s been distressed about Sansa’s age since his father first told him of the arrangement. Nevertheless, its impressive to see ‘the god of tits and wine’ reject such a fine prize. Perhaps Sansa will one day love Tyrion, but until then… 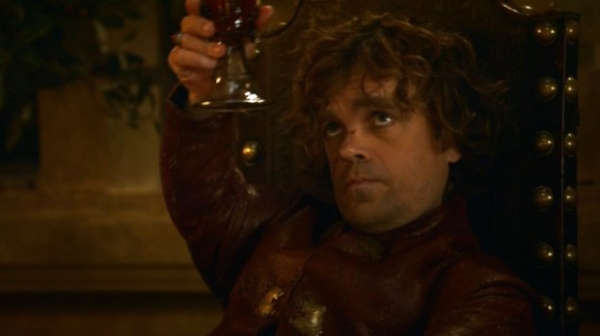 Across the Narrow Sea, Dany’s enemies are stirring in Yunkai. The slavers have bought the service of the ‘Second Sons,’ a dangerous band of mercenaries from the Free Cities. Daenerys meets with the three leaders to broker an agreement. The instant the ‘Titan’s Bastard’ opened his mouth we knew he was done for. No one talks to the Mother of Dragons like that. Unfortunately, we did not get to witness his demise. However, we do get to witness his head, along with that of his fellow captain, being brought before Daenerys at the hands of our newest character, Daario Naharis. The sexual tension between the two is quite obvious. The mysterious left-tenant is clearly a skilled warrior, but how will this alliance fair with the rest of Dany’s advisors, namely Ser Jorah.

I was surprised to see things blow over so well for Dany. We’ve seen her at the precipice of disaster by this point every season. I have hardly seen any of that this year however, as she seems to be getting what she wants with astonishing ease. At this point though, I would like to see her challenged a bit more. Perhaps she will be. Its hard to be challenged with three dragons and eight-thousand Unsullied at your back. Valar Morghulis, indeed.

Lady Malisandre and Gendry have landed at the Targaryen keep of Dragonstone. I’m relieved to see this chapter unfold. I find it to be one of the most compelling story lines of the series and have been frustrated with it’s lack of screen time. We see Ser Davos for only the third time this season, freed by Stannis in a powerful dialogue-driven scene. Gendry is brought before Stannis at Malisandre’s request. And, after a lustful encounter in his new bedchamber, she straps Gendry to the bed and draws his blood with three leaches. “The usurper Robb Stark. The usurper Balon Greyjoy. The usurper Joffrey Baratheon,” Stannis says as he tosses the fattened leaches into the fire. The Lord of Light still has a major roll to play in this story. Will these  offerings be enough to satisfy the god? Or will Gendry need to spill more of his King’s blood? 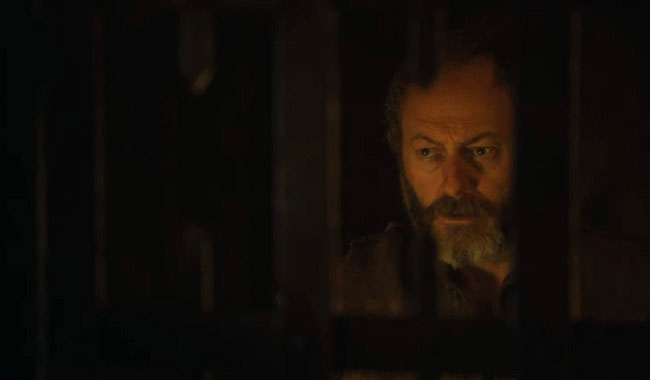 Ser Davos’ release was one of the high points of the episode. He’s finally learning to read despite years of turning down his son’s offers to teach him. Stannis Baratheon’s resolve is stronger than ever as he tells the Onion Knight of his vision. ‘A great battle in the snow’ is all we get right now, but thats enough to get our imaginations churning. The two have seen things that can’t possibly be explained, no doubt the Lord of Light is at work here. Will Ser Davos become a believer as well? Or will he have another go at the Red Priestess?

‘Second Sons’ ends with a trip north of the Wall. Sam and Gilly make camp in an abandoned shack, crows flocking as they go. The two’s discussion of baby names is cut short by the noise of scores of black crows. Then, a White Walker appears – he wants the boy. Sam’s sword is shattered at the very touch of the Walker’s hand. Desperate and brave, Sam unsheathes the Dragon Glass dagger and drives it into the Walker’s back. We all knew the Obsidian blade was meant to kill the Walkers, but it was bad ass nonetheless. Only, correct me if I’m wrong, but did Sam leave the dagger behind? Pretty sure he did. Dammit, Sam… 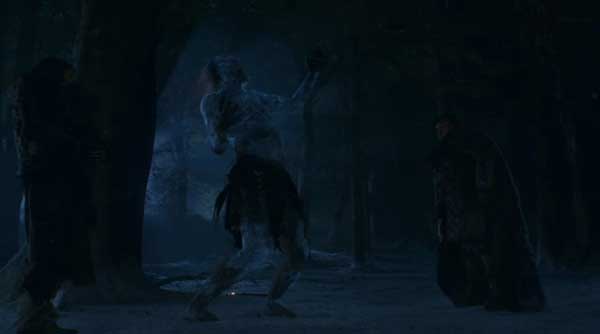 Kings Landing: Although the wedding was focused on Tyrion and Sansa, my favorite scene involved two women of House Lannister and Tyrell. This is the first time we’ve seen Cercei openly threaten Margery. She’s impervious to her manipulation, probably because she’s a master manipulator herself. The tension could be cut with a knife, all the while they must go around with those forced smiles glued to their faces. Margery is still betrothed to King Joffrey and clearly a threat to Cercei, but how long can she keep the young, sadist king under her spell?

Yunkai: Ed Skrein as Daario Naharis is a welcomed addition to the ‘Game of Thrones’ cast, but my high point for this sequence lies within the Queen’s tent. She doesn’t use her dragons to intimidate her enemies this time around, rather, she relies on her loyal advisors and commanders. Ser Jorah steps forward and Grey Worm offers his blade. “If it should come to battle, kill that one first,” Dany says in a flash of anger. Tell me you didn’t get goosebumps when Ser Barristan responds, “Gladly your Grace.”

Dragonstone: I’m going to stick with Ser Davos’ release as the highpoint of this sequence. We get a better understanding of Stannis’ motives and character. He’s indifferent when it comes to the slaughter of Gendry, a most disturbing notion to the Onion Knight. But the ends always justify the means for Stannis Baratheon. He saw the great battle in the snow and knows that the he is the only one who can stop ‘the darkness that will swallow the dawn.’ Sacrifices must be made, “the Lord of Light demands it.”

Only two episodes remain this season. We’re on the cusp of episode 9, which in seasons past has been a bookmark for disaster. ‘Second Sons’ keys on our favorite characters, giving us a better understanding of motives and plot. I don’t think we’ll be seeing this sort of focus for the rest of the season. I won’t say that it is the best episode of the season, but it’s far from the worst. It was extremely well written, acted and filmed. Expect to be jumping all over the map come episodes 9 and 10. It was fun while it lasted. Overall, ‘Second Sons’ delivers.

Here’s a preview for the ninth episode: