Most great works of TV or film usually have an excellent score behind it, and Game of Thrones is no different. While soundtracks frequently serve the purpose of helping to create the mood of a particular scene, the music from Game of Thrones takes the listener on a wild ride through the pages of George R.R. Martin’s novels themselves. From compositions that reflect the personalities of main characters, to themes that represent various locations, the music connects with fans in much the same way the series does. We have to wait until Season Three premieres on March 31 to hear what new music will be incorporated next season. Until then, here’s a look at what the first two soundtracks have to offer:

After Stephen Warbeck backed out at the last minute, Ramin Djawadi was chosen to compose the score for the premiere season of Game of Thrones. Djawadi is a credited composer whose previous works include Iron Man, Clash of the Titans, and Prison Break. Backed by the London Symphony Orchestra, Djawadi managed to put together an excellent blend of exciting motifs and strong harmonies that have enhanced the intense drama and endless tension that Martin’s novels are known for.

The album starts out with “Main Title”, which is exactly what is heard during the show’s opener. This is an enticing and powerful piece driven by a 4-note cello ostinato that is instantly recognizable. When coupled with the amazing visual effects from the opening sequence, this track definitely stands out as one of the most memorable songs on the album. The theme is referenced throughout the album on tracks such as Jon’s Honor, Kill Them All, Game of Thrones, The Kingsroad, and Things I do For Love, giving the album an overall feeling of familiarity and consistency.

Most of the soundtrack is very distinctive and full of atmospheric pieces that follows the show’s dramatic storyline quite well.  The 28 tracks after “Main Title” consist of pieces that represent individual characters, as well as various scenes and locations within the show. One criticism do I have is that some of the songs are too reliant on what is happening on-screen.  For example, “North of the Wall” is one that does a fantastic job of evoking the harsh, freezing climate of the Lands Beyond the Wall. However, the rising action is rather confusing without actually seeing the events take place. Other tracks, such as “A Bird With Feathers” and “You’ll Be a Queen One Day” probably won’t be recognizable to fans, as they aren’t strong enough to stand on their own. This is because a lot of the tracks on the album aren’t intended to drive the scene, but to simply enhance the mood. On the other hand, pieces like “The King’s Arrival” and “The Pointy End” are powerful enough help listeners visualize the scene and tie the two together.

“The Pointy End” is probably my favorite song on the album. It’s a brilliantly crafted piece that perfectly depicts Arya’s struggles with her “Dancing Master” Syrio Forel. The use of exotic instruments and melodic percussive beats create a nice change from most of the darker tracks on the album. It’s a light-hearted rhythms don’t explode with action as most of the other up-beat songs do, which was a pleasant surprise. “The Assassin’s Dagger” and “Small Pack of Wolves” are two of my other favorites. The former, played during the attempt to kill Bran, consists of a shrieking woodwind instrument creating a dark and spooky effect which adds to the suspense of the scene. “Small Pack of Wolves” features a solo cello layered with thunderous percussion and an intense string arrangement. The crashing rhythms create a driving action piece that doesn’t let up from start to finish. 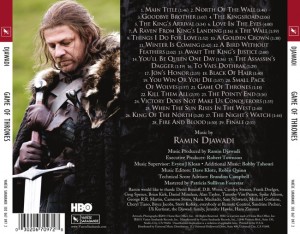 The score decidedly ends with a sequence 4 songs from the final episode, “Fire and Blood”. In “King of the North”, Djawadi makes use of yet another cello solo to compose an emotional piece of music to go with one of the first season’s most important scenes. Next comes “The Night’s Watch”, which gradually increases into a pleasant mix of strings and horn sections. However, this tracks seemed a bit too up-beat to represent something as cold and diminishing as the The Night’s Watch. The final two pieces on the album, “Fire and Blood” and “Finale” conclude the score with a dramatic endowment of percussive elements and the piercing sounds of an oboe. Enhanced through the slight sounds of a chorus ensemble, and the return of the “Main Title” ostinato, these final pieces are an nice crescendo to end the score.

The biggest criticism I have about the album is that most of the tracks are fairly short. Most are around 2 minutes long and, stunningly, there are only 6 tracks out of 29 that are over 3 minutes. Also, most of the tracks seem to die off with about 30 seconds left. Even the more action-packed pieces come to a violent stop, and fills the rest of the composition with atmospheric instrumentation that isn’t  very interesting.  However, most of the music is great and serves as an important aspect of this series. If you’re a Game of Thrones fan, then some of the music will certainly have stuck with you. You might be surprised how much the music from Game of Thrones adds to the overall experience you get from watching the show.

Ramin Djawadi returns to score Season Two, this time backed by the Czech Film Orchestra and Choir. Without a doubt, I can say that I like this soundtrack much more than Season One. Even though performed by a different orchestra, there is no drop in quality and the tracks seem to be more thematic and powerful that the last one. Copied over from Season One, the excellent “Main Title” remains unaltered and once again transcends into other tracks in various forms. These tracks include “Don’t Die With a Clean Sword”, “Mother of Dragons”, and, most notably, “I Will Keep You Safe”.

Going through the album, we first have “The Throne is Mine”, which is a darker and more driving version of “The King’s Arrival” from the first soundtrack. Next, we have a piece based on House Greyjoy called “What Is Dead May Never Die”. The song feels a bit constrained as it starts out with a slow build-up of high notes from stringed instruments. However, the track picks up and ultimately concludes with a medium-tempo composition with strong elements of percussion and brass mixed in. The Greyjoy theme continues later on in “Pay the Iron Price”, but the first half is rather wasted until it builds into a  mood that portrays Theon rather well.
The track “Warrior of Light” introduces Stannis and the mysterious Melisandre. Yet another piece driven by dark and spooky effects, it’s much more atmospheric than it’s action driven counterpart titled “Don’t Die With a Clean Sword”. One of the album’s better compositions, that latter is a heavy track accompanied by throbbing percussive elements, that brings Stannis’s journey to a climax. As the drums keep pounding, strings help build the intensity until the suspense ends with an exciting variation of the “Main Title” blended in. A perfect example of how the soundtrack creates a perfect marriage of music and visual aspects, this track brings the listener straight onto the beaches of the Blackwater for the showdown in front of King’s Landing. Additionally, “Stand and Fight” is another action packed composition about the Battle for Blackwater Bay. Including a harsh, clanking metal sound, it makes me think of swords crashing together and the screams of dying soldiers. 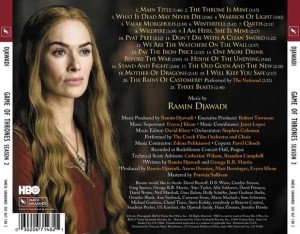 There are a few other tracks that deal directly with Season Two’s most memorable episode. “Wildfire”, for example, is a piece that continually builds on itself to create an enticing and alluring track. As  mentioned earlier, “Don’t Die With A Clean Sword” is a reference to the quote “If anyone dies with a clean sword, I’ll rape his fucking corpse”, which was brilliantly delivered from The Hound as he rushed out the gates of King’s Landing to meet Stannis’s forces head-on. The Hound is also presented in “One More Drink Before the War”. Based on ascene that wasn’t originally in George R.R. Martin’s novels,  it’s a gritty piece with undertones of deep throbs from a bass drum, and long, drawn-out string notes. A little more up-tempo then I would have like, but still a very good piece.

Mysterious and magical elements are new themes found in the Season Two Soundtrack. Most notable is “Valar Morghulis”. Titled after the final episode of Season Two, this track is far and away my favorite on the album. The exotic instruments used make this track delightfully different than anything else found on the album. The ostinato from a brightly sounding stringed instrument and the use of hand drums creates a soft touch which complements the sharp progressions from the strings into a very unique sound. What I really like about this track, is that it’s such a powerful song that is transcends the actual scene and creates a world all its own. The track screams Arya and Jaqen, making it easily to picture aspects from the episode in which it’s titled after. Comparable to “The King’s Arrival” from Season One, this is definitely one of the power tracks from the series.

Much to the delight of fans, George R.R. Martin’s own lyrics to “The Rains of Castamere” is immortalized by Brooklyn-based band The National. It’s also the only song from both albums to contain vocals as a centerpiece. The song is a story about Lannister pride, and is referenced throughout the book series. Sung in a low and soft tone, lead singer Matt Berninger lends his soothing baritone voice to the track, enhancing the dark and disturbing emotions in the song.

Overall, this soundtrack is much more well-rounded and interesting than Season One. The tracks seem to stand on their own better, and don’t rely on what is happening on-screen nearly as much. You can visualize the scenes in which songs are based on and they are much more recognizable. The overall track length has improved, but not much. However, tracks don’t seem to end abruptly as most from Season One did. I think the music composed by Djawadi really captures the essence of the show nicely. The first season soundtrack laid the groundwork for much of the musical elements of the show, but this album really stepped it up and created a score that really stands out on its own. Although I’m pleased with much of the album, tracks like “Pyatt Pree” and “House of the Undying” are rather disappointing. Two tracks that seemed to have potential of re-creating the magical elements from the show, really don’t live up to expectations. The same goes for other tracks which I won’t mention, but  I think the standout pieces make up for it. Overall, the Season Two Soundtrack for Game of Thrones presents a unique and interesting blend of sounds. If you’re a fan of the show, it’s definitely worth owning a copy.