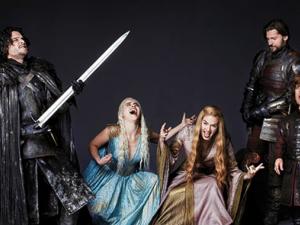 Mark your calendars everyone! HBO just tweeted an announcement that Season Three of Game of Thrones will officially premiere on March 31, 2013. With this news, Season Three is set to air almost a year to the day after the second season premiered. Production for the hit fantasy series is on-going and principal photography for Season Three began in Belfast on July 9. The show will span four countries during filming and some new faces will make their directorial debut as well. A massive casting announcement was also released today just as the Game of Thrones Comic-Con panel took the stage. HBO issued a press-release with a list of 14 actors who will play new roles in the upcoming season. An exciting day for all of us Thrones fans!! I’m sure I can speak for everyone by saying that Season Three can’t come soon enough!!

In case you’ve already forgotten what happened in S2, here is a video recap that was shown during the Comic-Con panel:

Author’s Note: Big news day! First the casting list and now a confirmed premiere date! Let’s get some Season Three speculation going on in the comments. Or just rave about how great the show is and how you can’t wait for it to return! We’ve updated the schedule in case you forget between now and 2013.