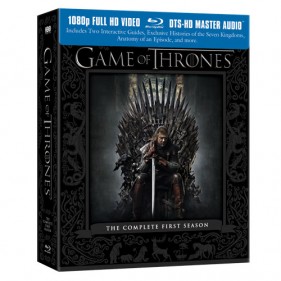 You may not be able to give the gift of Game of Thrones on Blu-Ray or DVD to your favorite HBO fan this year but you’ll get a special bonus for pre-ordering it.  Today at the HBO Store the company is offering an exclusive “Creating the World of Westeros” bonus disc!  We’re assuming that this disc is simply a compilation of the web featurettes released throughout the promotion of Game of Thrones Season 1.  The DVD will set you back $60 while the Blu-Ray set will cost $80.

The release date was previously thought to be on March 6th or later but we can now confirm that date to be March 6th!  Until then you can watch the entire series On Demand as it will be available for the foreseeable future.

For a list of everything that will be packed into the Game of Thrones DVD and Blu-Ray bundles check out our list of special features!