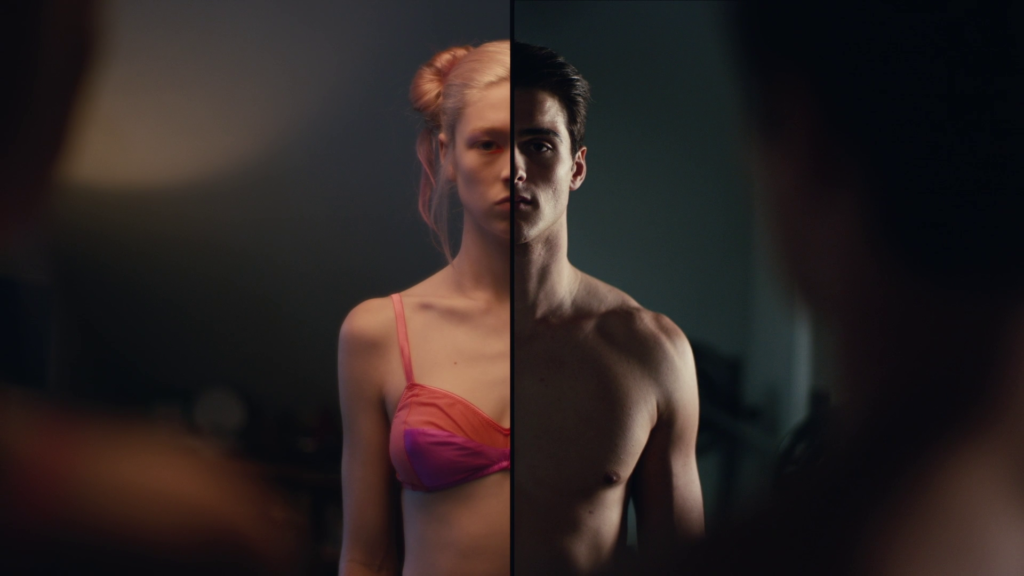 If anyone was mentally jarred at the sight of thirty flaccid penises flopping around in a locker room last week, boy did Euphoria have a hell of a surprise for you this week. Not only do we get full-on X-rated fanfic — which One Direction’s Louis Tomlinson is not happy about, by the way – but an entire sadomasochism masturbation scene, cementing Euphoria in its unapologetic nature when it comes to pushing the limits of nudity and sexual subversion on television to a hyperbolic extreme. For some, it has become excessive and gratuitous. For others willing to surrender to its allegorically surreal and depraved nature, it has remained a treat that is arguably well-validated by the era and the serious topics it is tackling. As surface level as Euphoria may look – another teen melodrama about drug- and sex-obsessed youth – it is telling phenomenally compelling stories through complexly layered characters along the way. Front and center, we have Rue, played with ferocious vitality by Zendaya (who better get her Emmy nomination for this series or I will riot). Before getting into fun Euphoria theories (like the possibility that Rue has been dead this entire time) and the intricacies of its characters, Sam Levinson’s astounding direction must be praised, along with the show’s extravagant cinematographers, creating a vivid and hypnotically neon-drenched daydream all while capturing the and emotive nature and extreme dread of Rue’s addiction and its appallingly detrimental effects. Fans of Requiem for a Dream may feel glimmers of Darren Aronofsky’s gut-punch when it comes to the horrors of addiction in this series. The trance-inducing splendor and horrific downfall in Euphoria are shared in equal measure through the scope of gen-z with nihilistic ferocity and kaleidoscope exhilaration, making for a mesmeric and distressing experience all at once. 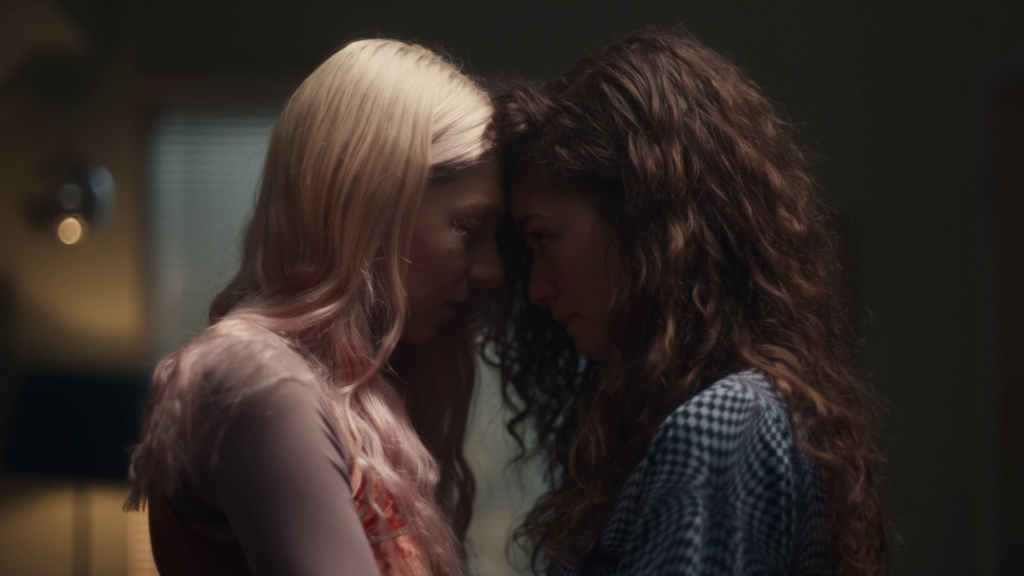 As much as Zendaya has shone in her role as Rue thus far, Euphoria finally gave one of its most fascinating characters – Kat – her time in the limelight, sometimes a bit too literally in this episode. As Kat has now become an internet sensation, thanks to her viral One Direction fanfic, she has become fully aware of the sexual longing men have for her on the internet – and after her experience with sex in the real world, can we really blame her for her newfound “hobby?” As much as I’d like to scream “NOT ALL TEENAGE BOYS ARE LIKE THIS!” and “STAY AWAY FROM ONLINE PERVERTS!” in her face, Kat’s decisions should not be as reductive as our society has implemented on women. Granted, underage girls should 100% stay away from the sex industry, online or otherwise, and I am in no way condoning her behavior. However, there is a deeper lesson to be learned in Euphoria. Kat has reclaimed the sexuality that her peers tried to tear from her, going from being reduced to a sexual object due to the leaked sex tape to owning her sexuality and taking full control of it for personal fulfillment. (And money, of course.) Kat is a genuine celebration of a teen girl regaining and expressing her sexuality on her own terms, and she is a massive subversion of the typical “nerdy/geeky” teen to which we’ve become accustomed. As if we needed further proof of her subversion, Kat donning a season one Khaleesi outfit and speaking Dothraki during a surrealist sequence is further proof of such. While I do believe an entire sadomasochistic masturbation scene with a micropenis may have bit much, it’s clear Kat is enjoying her newfound freedom and bliss, and she deserves it. (Let’s just hope no one finds her online this time.) 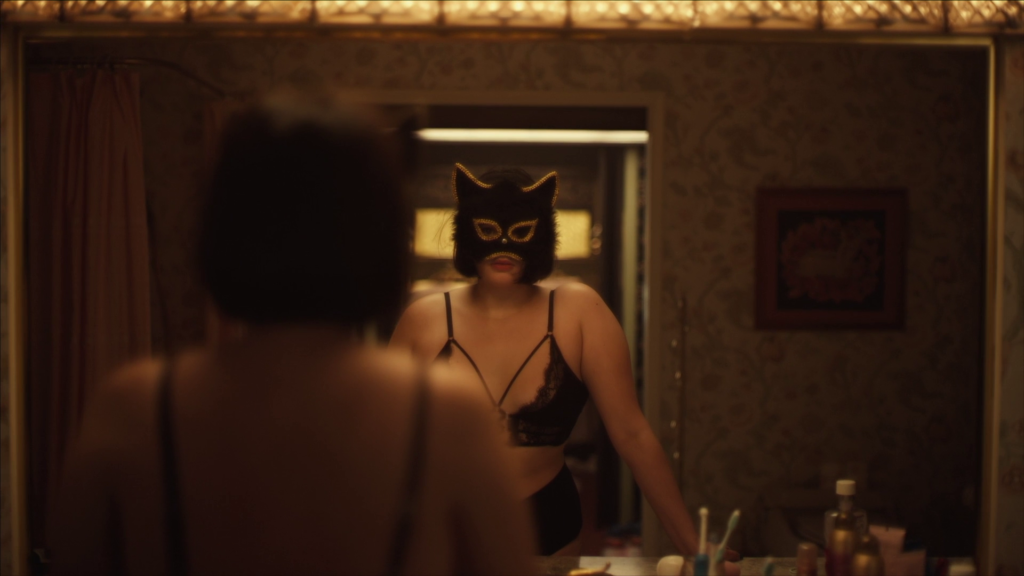 Jules is perhaps the most complicated and mystifying character on Euphoria thus far, sometimes crossing into fiery irritation and infuriation. She seems to not only lack the empathy she once had for Rue – she’s become entirely oblivious to Rue’s emotions, entranced entirely by her newfound love for “Tyler.” Still, as terrible as Jules is at reading body language and behavior, this doesn’t diminish the love and care she has for Rue and the effect Rue’s addiction is having on her. This is where theorizing about where Euphoria is headed gets interesting. For those familiar with The Rule of Three – usually, a physical modality in which a trifecta of occurrences is an omen of death – Rue is currently facing three individuals who have made it clear they will not take part in her drug-fueled suicide. The first is Jules, of course, who plainly tells Rue, “I’m not trying to become best friends with someone who’s going to fucking kill themselves.” Additionally, we are introduced to Ali, an addict who is fully aware of Rue’s lack of sobriety and also tells her, “Let me know when you stop trying to kill yourself.” Lastly, we have Fez, Rue’s loyal friend who has clearly become exhausted by her self-destructive behavior as well. Before locking her out of his home as she screams and pounds on his front door in agony, he mutters almost the same sentence to her: “I’m not gonna help you kill yourself.” 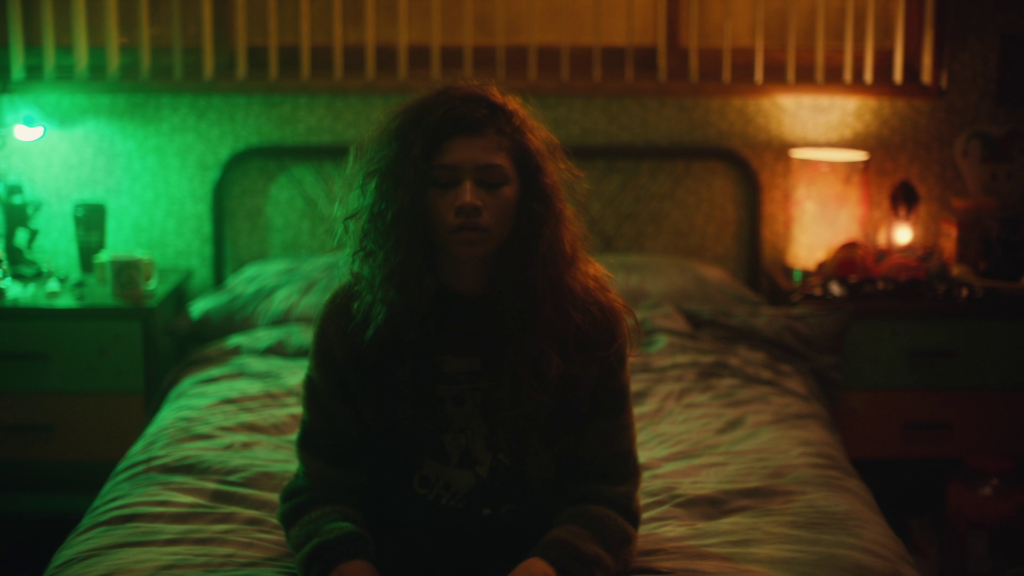 The themes of death and rebirth have been predominant since the series premiere of Euphoria, in which Rue ODs yet also discusses her birth, stating, “I put up a good fight, but I lost, for the first time, but not the last.” Many have theorized this is symbolic of Rue’s death, having struggled through her addiction and “putting up a fight,” eventually dying and now recounting her tale as an unreliable yet omniscient narrator – which may also serve as an indication that she is dead and retelling not only her story, but the stories of those that impacted her life. Of course, it may be too early to tell, and given how phenomenal Zendaya’s performance has been every minute she has been on screen, I’d be devastated if the series ended with her death – particularly after seeing her finally turn a new leaf and take the road to recovery for those she loves. And yet, we know Rue is a master manipulator, making it difficult to visualize a truly happy ending for her. At its core, Euphoria has done a phenomenal job of capturing both the climactic ecstasy and traumatic heartbreak addiction brings into the lives of those it deeply affects, and I fully expect it to drive this message home to the end. While many may dismiss the series as smutty teen melodrama, Euphoria has an immensely compelling and vitally important message for those struggling with addiction or anyone who knows someone struggling with addiction. As difficult as it may be, never give up on them, because as much as they may chase the euphoria, nothing is ever worth the comedown.