The Duplass Brothers, Jay and Mark (pictured), are still hanging out with HBO even though their one series TOGETHERNESS only lasted two seasons. They are also executive producers and occasional voices on the current series ANIMALS. and are about to add their third venture. Debuting Friday, July 28 is ROOM I04. Here is the official announcement of that premiere:

HBO has confirmed the debut date of the Duplass Brothers-produced half-hour anthology series ROOM 104, which will begin its 12-episode season FRIDAY, JULY 28 (11:00-11:30 p.m. ET/PT). Set in a single room of an average American motel, ROOM 104 tells a different story of the assorted characters who pass through it in each episode. 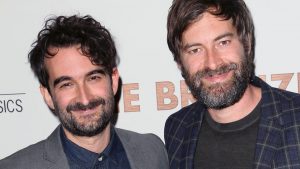 Note that this show being an anthology will have different characters every week. The topics will surely vary from comedic to dramatic to possibly even tragic and offer the dynamic range of human conditions and situations. Each week you are never sure what you are going to get. Just by the graphic offered we can’t tell much about the size and accommodations of this room. It is described as an “average American motel” room but it doesn’t look like a seedy dive with a coin-operated bed in it. Are you interested in stepping inside this summer?

Again, the story these four walls will tell begins 07.28 on HBO.