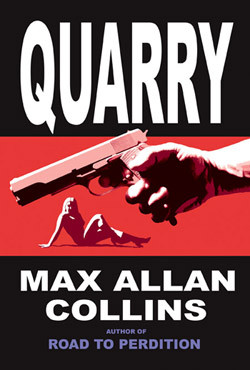 From the following press release we learn of a new series on Cinemax to join STRIKE BACK, BANSHEE and THE KNICK.

“This nuanced and dynamic show marks an exciting moment in the evolution of CINEMAX programming,” said Lombardo.

QUARRY tells the story of Mac Conway, a Marine who returns home to Memphis Tennessee from Vietnam in 1972 and finds himself shunned by those he loves and demonized by the public. As he struggles to cope with his experiences at war, Conway is drawn into a network of killing and corruption that spans the length of the Mississippi River.

An HBO Entertainment production in association with Anonymous Content, the series is also executive produced by Matt DeRoss (The End of the Tour), David Kanter (The End of the Tour), Max Allan Collins and Ken Levin (The Scribbler). Additional writers on the series include Jennifer Schuur (Hannibal) and Max Allan Collins. QUARRY will film on location in New Orleans and Tennessee.

Now that has got to be the most minimal amount of information one could possibly give out, isn’t it? If the series takes off for cinema though it could last quite a few season as there are, to date a total of Quarry novels to draw from.

Has anyone read any of these? Amazon sells them if you are interested. Also, if interested HBOWatch will get more details as this show gets underway.