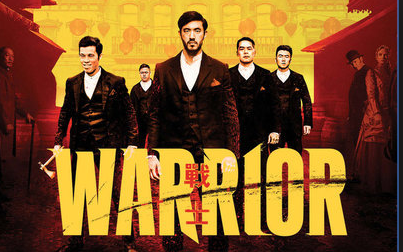 In the whole new ownership shift that is occurring, we can’t forget HBO sister channel CINEMAX. Though it is not sure on whether this channel is going to see a major upgrade under AT&T or not we do know that, at least for now, it is business as usual. WARRIOR is playing out its debut season, a new series called JETT is about to premiere (more on that in June’s “What’s On” post) and STRIKE BACK has got one final season in the works. Now, we learn that the Bruce Lee inspired WARRIOR will live on to fight another day as that series looks to a sophomore season. Here are details, via a press release, of news of Season Two.

BASED ON THE WRITINGS OF MARTIAL ARTS LEGEND BRUCE LEE,

Following the show’s April 5 premiere, the CINEMAX drama series WARRIOR has been renewed for a second season, it was announced by Len Amato, president, HBO Films, Miniseries and CINEMAX Programming.

“Bruce Lee’s vision is alive and well,” noted Amato. “WARRIOR combines high-energy martial arts with wit and brains. We’re thrilled to renew such a great show for a second season on CINEMAX.”

WARRIOR is a gritty, action-packed crime drama set during the brutal Tong Wars of San Francisco’s Chinatown in the second half of the 19th century. The series follows Ah Sahm (Andrew Koji), a martial arts prodigy who emigrates from China to San Francisco under mysterious circumstances. After proving his worth as a fighter, Ah Sahm becomes a hatchet man for the Hope Wei, one of Chinatown’s most powerful Tongs (Chinese organized crime family). 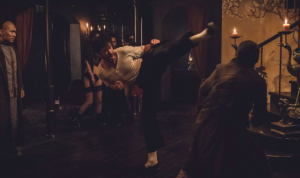 Among the critical raves for the current season, which airs Fridays (10:00-11:00 p.m. ET/PT) on CINEMAX, Rolling Stone called the show a “lush action drama” where “the legend becomes fact in an unexpected, wonderful way with all of the bells and whistles of modern TV,” while IGN praised WARRIOR for its “efficient, energetic, and enjoyable [ability to bring] American history to vivid life with verve, intelligence, and memorable fists of fury” and “thoughtful political edge,” and Mashable described it as “triumphant” and “a victory.”

If you are into martial arts action at all this is pretty amazing hand combat action here. I understand that though there are stunt actors for some scenes must of the fighting action is performed by the actors themselves and a number of disciplines are used to pack the right punch.

So, look for more WARRIOR!