June 2018 saw the premiere of J. K. Rowling’s crime drama venture and now a second installment has been commissioned. Below are details from an official press release detailing the return of C. B. Strike with LETHAL WHITE. 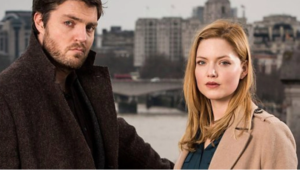 Show Based On J.K. Rowling’s Crime Novels Written Under The Pseudonym Robert Galbraith

Filming has begun on the four-episode second season of the CINEMAX and BBC One series C.B. STRIKE, titled LETHAL WHITE. Stars Tom Burke (“The Souvenir,” “The Musketeers”) and Holliday Grainger (“The Capture,” “Patrick Melrose”) will return, along with Robert Glenister (“Live by Night”), Natasha O’Keeffe (“Peaky Blinders,” “Sherlock”) and Kerr Logan (HBO’s “Game of Thrones,” “Alias Grace”) for the fourth story based on J.K. Rowling’s best-selling Cormoran Strike crime novels, written under the pseudonym Robert Galbraith.

In the grips of psychosis, a young man named Billy Knight (Joseph Quinn) arrives in private detective Cormoran Strike’s (Tom Burke) office telling the story of a child he saw strangled many years ago. Strike is simultaneously hired by government minister Jasper Chiswell (Robert Glenister) to 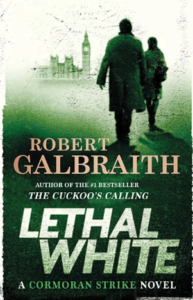 investigate Billy’s brother, Jimmy Knight (Nick Blood), who is blackmailing him. As Strike and his partner Robin (Holliday Grainger) work to determine how the cases might be connected, Robin goes undercover in the House of Commons. However, Robin’s private life is unraveling as her relationship with Matthew (Kerr Logan) feels the full strain of her commitment to Strike and her work. At the same time, Strike has his own issues, a girlfriend who confesses she loves him and his complicated ex Charlotte (Natasha O’Keeffe) who is pregnant and back in the frame.

This is the second season of the C.B. STRIKE series for CINEMAX and the third season for BBC One. BBC aired THE CUCKOO’S CALLING and THE SILKWORM as their first season and CAREER OF EVIL as their second season, while the three titles comprised CINEMAX’s first season. Sue Tully will direct all four episodes of CINEMAX’s LETHAL WHITE, produced in association with BBC One. J.K. Rowling executive produces through her Bronte Film & TV production company; Neil Blair, Ruth Kenley-Letts and Tommy Bulfin for the BBC also executive produce. Produced by Jackie Larkin based on a script by Tom Edge.

Note, though HBONow/Go will continue after HBOMax’s launch there is no word of what will happen to Cinemax and its original content. But, with the return of this series and the promise of the return of WARRIOR the sister channel is business as usual so far.