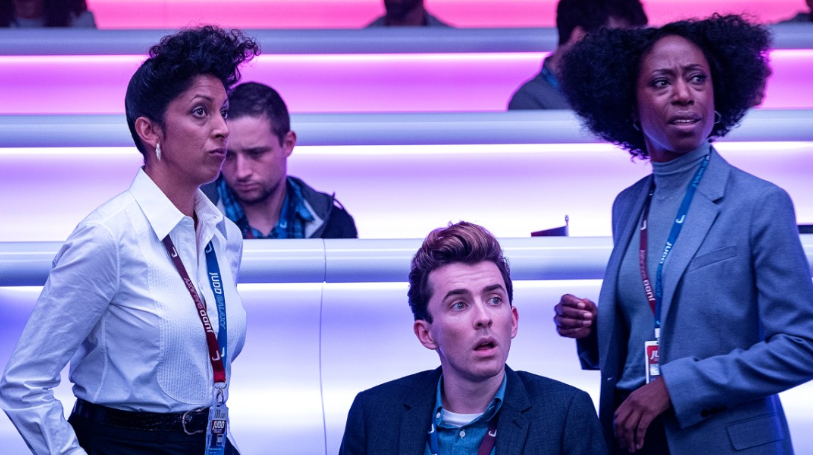 Armando Iannucci’s writers’ room and production crew have churned out the best episode to date of Avenue 5. “Are You a Spider, Matt”?, is an extremely fast-paced, but character building episode. We experience chaos onboard the titular vessel and on the, until now underused, ground station. Regarding the latter, protests outside of the facility have reached an apex, and mission control’s Rav Mulcair, is desperately seeking a way to divert the heat from herself. She concocts a plan to board a supply vessel bound for the Avenue 5 (funded with the two U.S President’s approval), kidnap the self-centered Herman Judd, and bring him back to Earth to answer for all of the misfortunes of the solar system touring vessel.  Avenue 5 is at its best when placing these characters in brisk and episodic situations. Usually, such frantic pacing is detrimental to storytelling, but as seen with Iannucci’s Veep, cynicism is not something to linger on. It is meant to briefly parody and/or reject the conventional troupes of life.  Previous episodes of Avenue 5 featured longer scenes that somewhat faltered due to being revealed to be not as deep and profoundly funny as intended.  If the remaining episodes and the episodes of the already greenlit season 2 are paced and structured like “Are You a Spider, Matt”?, then Avenue 5 will be a memorable HBO comedy entry.

Captain Ryan, as we know is not a real Captain, but has exhibited exceptional bravery throughout the Avenue 5’s misfortunes. However, he loses his composure during a dinner that was meant to mend over the misunderstanding that 500 people were to be jettisoned off the ship to conserve resources. Ryan reveals he is going through a divorce with his wife and husband (yes, you read that correctly) to those present, and despite the contemptuous nature of the series, viewers can read sympathy off of the faces of the crew and passengers.

The ever-resourceful and bubbly Billie has an epiphany when Ryan rises and pushes away from the table in anger:  Instead of jettisoning passengers off the vessel, non-essential items should be the debris to enter the cold-vacuum of space. The plan will also allow the ship to break free from the cloud of shit and five dead bodies that are locked into the ship’s gravitational pull.  However, this is a pyrrhic victory. No one on board is qualified to dock the ship, and Billie’s brilliant idea has made it possible to get home in six-months (let’s hope that this remains true).  According to the show’s logic, it takes 3.5 years to learn how to navigate and dock a vessel of Avenue 5’s grandeur.  Not really Captain Ryan and his crew will have only six months to learn the daunting details of the evolution.

The timeline involving Mulcair’s rendezvous with Avenue 5 is unknown.  Will this small vessel take days, weeks, or months to reach the larger and significantly slower Avenue 5?  Join the misadventures of the crew and passengers of the Avenue 5 next Sunday the 8th at 9:00pm to find out.