*Note* Before watching this final episode of AVENUE 5 I made a prediction, though not a very thorough one. Hah, kind of apropos considering how these characters behave and think. Anyway, either the incoming missile malfunctions just in time because the lithium that runs its GPS is spent and it races right between the two halves of the ship or the missile makes a direct hit scattering Avenue 5’s atoms across the universe, but everyone on board manages to get off the ship safely before that happens. Don’t ask me how. As I said, I didn’t think it that far through. 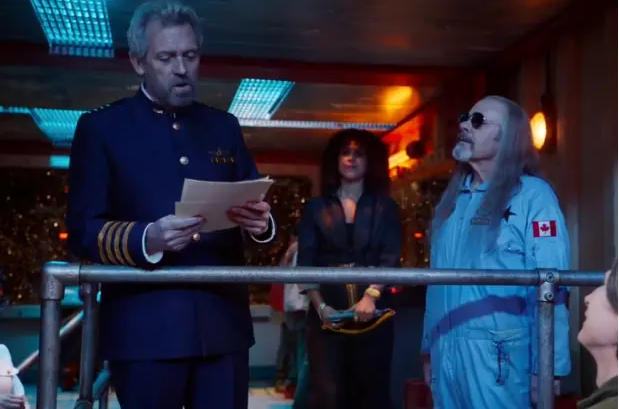 Ah, blissful chaos, and no one is certain which half will take the hit. Viewers are quickly apprised who resides in which half; Ryan, Billie, Spike, Frank, Karen, Mia, and the Cannibal are in the aft or back, as they call it and Judd, Iris, Rav, Matt, Doug & the baby, along with the eels are in the fore, uh, front. Judd, of course, miserably fails at leading his half. The most solid plan out there to save their scruffy asses was Spike’s (Ethan Phillips). He could take the one-person pod left and fly into the missile and that will be that. He’s old & ill anyway – bad heart or so he thinks. Spike does launch toward his death but that’s okay because we have a wedding to attend too. But then Rav has an idea to completely deaden the ship so that the missile can’t locate its heat signature, though she didn’t quite put it that way. Who thought it would lead to this? It was one thing to have the inmates lead the asylum, as it were, but now they are trying to save it.

Desperate moves all around including negotiations with Earth and Spike turning chickenshit because he’s healthy after all. The afterburners, as he dodges the missile in the last second, cause the missile to, YES, go between the halves of the vessel saving all aboard. It strikes the lithium-filled asteroid instead. Don’t worry, the vessel managed to harvest a bit of the rubble.  Oops, did I just give something crucial away? Well, then I won’t give any more than that. Oh, yes I will, one more tidbit – it seems in the frantic scramble to say their goodbyes and resolve this and that, Captain Ryan ended up marrying Karen Kelly. Ah, Ah, Ahhh, you’ll have to watch to find out how that happened. But, as Capt. Ryan would say, “Ah, bollocks!” 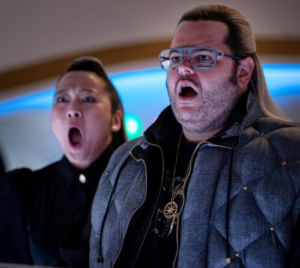 But we can say “Bollocks” as well. Is that how AVENUE 5 is to end? With the retrieval of some lithium, we know that their inaugural season comes to an end, but is that it? It has been bandied about that Season Two completed the series run but the fact is the show has not been canceled or renewed. The creator, Armando Iannucci, told EW that the show was not canceled if he had any say in the matter. However, we also know that Iannucci is developing another show called THE FRANCHISE.

So, with all that in play we are left waiting to see whether AVENUE 5 is decommissioned or not. If it is, well at least we know that the vessel was saved from a disastrous end. We will keep you posted, but for now, this is AVENUE 5 signing off.