Here we go with one last deadly crisis to divert. I mean, we aren’t going to see the Avenue 5 and all aboard have their collective atoms scattered across the universe, right?

So, we have incoming, a big missile that is out to obliterate the vessel just like the fictional one was taken out. But Herman Judd says the ship can separate in two (because it was cheaper to build it that way) thus only destroying half the ship. The wrench in the works there is that not all aboard can survive in the saved half. Oooh, that means Ryan has to come up with a listing of those who survive and those left for the doomed section. Lucky him. Aiding him is an AI algorithm that ranks all aboard for their value aboard because Judd finds value in everything. Simple then, those with a low value are scrubbed and those with a higher ranking survive. Episode over.

No, not really. It is not as neat & tidy as all that. That setup, of course, leads us to scenes with people evaluating their rankings and those trying to approve their rankings. For example, Karen can’t fathom why she is so lowly ranked and her husband Frank ranks higher. The funny gag here is that everyone’s monitor pings when they get an uptick in ranking and 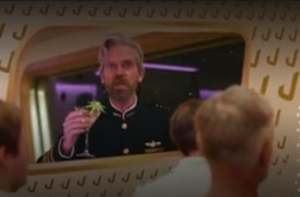 buzzes when it downticks. Most, of course, think it is all for fun & games and not dire consequences. If they all find out the truth isn’t another bout of rioting going to be a rather moot point? Anyway, most just play along but some, like Rav, panic when a series of buzzes spirals her rank lower.

We could go on about how Karen has found a way to downtick Ryan because she learned he doesn’t like her one iota or how Billie is obsessed to find the one person that ranks better than her; that’s right she is ranked # 2 but isn’t satisfied with that, but what we need to know is how it all resolves. All I’ll say is this – a twist happens as the ship separates but it won’t change the outcome, heartfelt feelings and sacrifices come to the surface and Mia has her baby.

Iannucci & writers slip in a touching moment that takes us to the final episode of AVENUE 5. The series concludes Monday, November 28 on HBO.