HBOWatch’s fearless editor-in-Chief is my co-reviewer of Season 2 of HBO’s AVENUE 5.  Like myself, he is enjoying Armando Iannucci’s sophomore effort with the premium cable network. However, he raised the question: “How many times can we have people accidentally divert the cruise ship even further off-course?”

Although plausible and entertaining, this plot device has indeed been exhausted. To be fair, even HBO’s greatest series THE WIRE (just my humble opinion) had an ongoing plot conundrum. Why not just shoot Omar while he is in the wide-open whistling “A Hunting We Will Go”? Even well-written stories have plot contrivances. I digress. 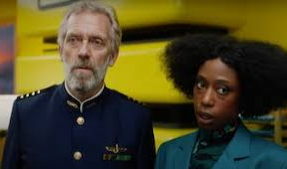 What other perils (other than supply shortages and crew/passenger anxiety), can this sci-fi comedy series present? How about space cannibals? A “dot” appears on the radar screen, and the crew deduces that the dot is a military or research space station.  This deduction is absolutely incorrect. The inhabitants of the space station appear to be nice but albeit quirky scientists. Although highly knowledgeable and capable of solving several of Avenue 5’s issues, the strangers are all convicted felons.  One of the felons jumps ship to hang with Frank on Avenue 5.  Let’s just say he was convicted of being the complete opposite of a vegan.

In a quick but effective sequence of Captain Ryan and crew boarding and escaping the space prison, they discover that they have Hannibal Lecter roaming the ill-fated cruise ship. The crew initiates a lockdown. When Rav accidentally leaves the intercom on while fretting over the inmate roaming the halls of the ship, the passengers deputize themselves to correct the situation, and a few passengers are hilariously accused of being the cannibal. When the cannibal reveals himself to the passengers that he is locked down with, they oddly deem him to be a good man that made bad decisions. 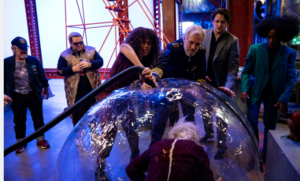 The cannibal is placed in confinement. Still docked with the prison station, a prisoner with the appropriate skill set is lured over (with the promise of being able to stay) to fix the eel tank (the ship’s source of food) problem. After he fixes the issue, Billie and the other engineers immediately roll his ass off in an inflated ball, back to the prison.

Iris returns (via a two-person rescue vessel) with a solution to the eel tank problem. When she realizes that issue is resolved, she reveals bad news. The Earth is gravely short on Lithium, a resource needed to sustain all modern technology. As I have stated in previous reviews, Iris is AVENUE 5’s wildcard. She is intelligent and remains relatively calm in most situations. On the surface, she is incredibly self-absorbed. Yet, she remains dedicated to solving the issues at hand. Is this due to a glimmer of altruism, or is it due to her being an associate owner of The Avenue 5? 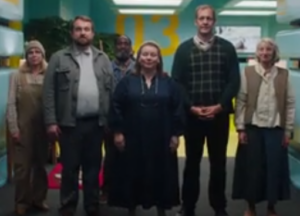 Billie, who despite having people skills, genuinely cares about the safety of everyone onboard. Captain Ryan is no captain, but has people skills and cares for everyone. Judd is an idiot but loves people. Iris’s disposition is as mysterious as the outcome of this series. Not only do I have no idea (other than a Deus ex Machina explanation) how this series will end, but it is uncertain if HBO will greenlight another season. Although not on a one-hour drama’s budget, this is certainly one of the most expensive half-hour series produced, and the viewership numbers are only average for a subscription service series.