Now I’m not going to lay on you a lot of hoopla and nonsense here but I am going to call out that on this night ten years ago a richly designed and intriguing show sparked an interest in the HBO viewer. On Sunday, April 17, 2011 GAME OF THRONES debuted. For the next eight seasons the tale played out on Sunday nights for 73 episodes and kept millions enthralled, including us at HBOWatch. Some of us have moved on from the series and some still cling to the epic saga as the greatest thing. Either way, fans can all agree that the night of “Winter Is Coming,” directed by Tim Van Patten and written by David Benioff & D. B. Weiss was a captivating cinematic introduction to the battle for the Iron Throne.

Of course, as we have announced, HBO is celebrating the series ten years out. How are you going to celebrate? I’m doing so by writing this blurb but you can do one mad binge of the series on HBO Max or you can dig out your disc collection and single out your favorite episodes. Maybe you are up for adding to your Funko collection from the HBO Shop. The ones pictured are on sale.  Oh wait, am I nuts? You want a gander of the $2 Million beauty, right? A one-of-a-kind Imperial egg by Fabergé, the world’s most iconic artist jeweler, inspired by Daenerys Targaryen, and co-designed by series Emmy Award-winning costume designer Michele Clapton is the prize you want. The egg includes a miniature crown designed by Ms. Clapton, which represents the crown Daenerys would have worn had she taken the Iron Throne. 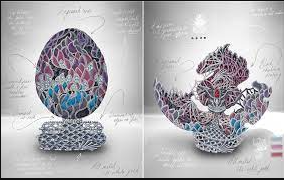 Okay, if the bric-a-brac isn’t your thing (or you have too much already) then how about heading over to BuzzFeed and taking their little quiz? They ask – “How Well Do You Remember the ‘Game of Thrones’ Pilot?” They test your memory with such questions as Who Pushes Bran?; What advice does Tyrion Lannister give to Jon Snow when they meet? and Why does Catelyn’s sister write to her? Head on over and have a go. But, make sure you come back to let us know how you plan on celebrating the Iron Anniversary! Hah, so much for not giving you any nonsense.