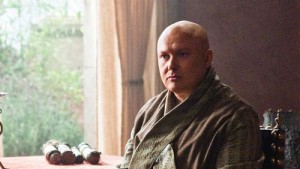 Varys, aka “the spider” or “the eunuch”  is such an intriguing character because of the way he plays “the game of thrones”.  And he truly is one of the important players in “the game”.  Varys sits on the small council in Kings Landing as the Master of Whisperers and is called “Lord” only out of courtesy since he holds no lands or titles.  Varys, played brilliantly by Conleth Hill, is known for his ability to gather intelligence on every matter in Westeros and across the Narrow Sea by employing his army of spies known as his “little birds”.  This skill in having knowledge before others, places him in a position of power.  He can manipulate “the game” to serve his needs or whoever he serves.   The real question is uttered so perfectly by Ned Stark in Season 1 while in his prison cell to Varys as he walks away “Who do you truly serve?”.

George RR Martin’s characters are always complex and Varys is no exception.   You are never quite sure where his allegiance lies.  Varys seems hardly a threat with his soft tone of voice, effeminate mannerisms, and his fine silk robes.  And everyone sees him as conniving, despicable, and lacking scruples but what they don’t see is how every move he makes is calculated.  Very early in Season 1, we already see Varys moving the set pieces when he visits Ned Stark, the new Hand of the King, in Kings Landing.   Varys explains to Ned that the King is in danger and he must protect him, but then tells Ned that the former Hand of the King, Jon Arryn, was poisoned.  When Ned asks why he was killed, Varys simply replies “He started asking questions.”   In this instance, Varys knows Ned Stark will soon be searching out the answers to those questions.  “The game” is set in motion.

In the very same episode, Arya Stark is chasing cats per instruction from her teacher, Syrio, and finds herself deep under the Red Keep.   She hears two men approaching and hides.  The two men are Varys and Illyrio Mopatis:

Varys: “The wolf and the lion will be at each other’s throats.  We will be at war soon, my friend.”

Illyrio Mopatis: “What good is war now?  We are not ready.  We need time.  Khal Drogo will not make his move until his son is born.”

Varys: “Delay, you say.  Move fast, I reply.  This is no longer a game for two players.” 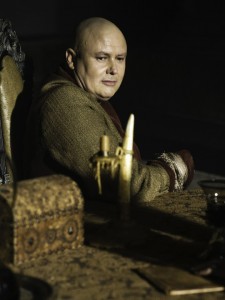 This is the first instance where we see a bigger picture developing.  Varys possibly working with Illyrio Mopatis to place a Targaryen back on the Iron Throne.   Or so it seems.  Moments later at a small council meeting where it is brought to the attention of King Robert that Daenerys Targaryen lives and is pregnant.  The King orders her death with the others on the small council agreeing including Varys.  It seems he votes this way because he is no hero nor a fool and it is unwise to defy the King.  What becomes confusing is later in Season 1, Varys seems to be the one in contact with his “little birds” across the Narrow Sea following Daenerys.   Most likely he is the one who set up the wine salesman with the poison wine in order to kill Daenerys.  It was also Varys who sent Ser Jorah Mormont, currently protecting Daenerys, the letter stating his pardon for his crimes and the ability to return to Westeros upon Daenerys’ death.  What we don’t know is what else the letter stated.  Perhaps something to change Jorah Mormont’s mind?

Near the end of Season 1, Varys using his knowledge of the secret passage ways in the Red Keep and dressed in disguise visits Ned Stark who is imprisoned for treason.  There Varys explains to Ned that no one wants him to be executed and if he legitimizes Joffrey’s claim to throne he will be given the opportunity to join the Nights Watch and live out his days.  Ned Stark being truly an honorable man will not confess.  Varys has no choice but to tell Ned that while he may be prepared to die his daughter Sansa will be in danger if he is executed.  A lie but a white lie.  Varys knows Ned will not endanger his family thus hopefully averting his execution and all out war.   Varys is very much concerned about keeping the peace in the realm.  But why?  He seemingly needs unrest in the realm to bring back a Targaryen to set things right.  Unfortunately, he needs more time to bring them back and the less time a civil war wreaks havoc on the people of Westeros the better it is for the realm.  The one thing Varys didn’t consider was King Joffrey acting rashly and separating Ned Stark’s head from his body post his confession.  Varys’ carefully laid out plan just went into overdrive and he knows the people of Westeros will suffer. 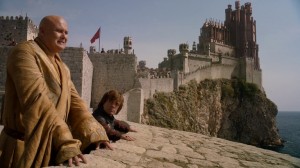 In Season 2, Varys begins to play a major role in Kings Landing.  The arrival of Tyrion Lannister to be acting Hand of the King has Varys quite intrigued.  He knows Tyrion is very intelligent and well read on the history of Westeros.  Their first meeting sets the tone of their relationship.  Varys awaits Tyrion in his chambers talking with Shae, the prostitute Tyrion has brought to Westeros against his father’s wishes.  It takes but a simple look into Varys’ eyes for Tyrion to realize he’s already begun playing “the game”.  Varys seemingly knows Tyrion’s father would not want a prostitute at court but sees an opening.   He offers to keep Shae a secret.  Tyrion views this as a threat and tells Varys he can be thrown into the sea.  Varys lets Tyrion know he is survivor in his great quote “Storms come and go, the big fish eat the little fish, and I keep on paddling.”

Varys and Tyrion form an uneasy trust both having mutual respect of each other’s ability to play “the game”.  Varys even reaches a point of admiration for Tyrion.  This is very evident  in the scene discussing a riddle about power:

Varys recognizes Tyrion as the sort of man who can change the realm for the better.  He realizes Tyrion has very little love for his family except his brother, Jaime.  Varys wants peace and to restore the realm to what it once was, but he can only do this by removing the Lannisters from the throne. Varys is pretty sure Tyrion would work against his own family if it meant keeping his position of power.   Tyrion throughout the season is intrigued by Varys and asks at one point “What do you want?” Varys replies “If we are going to play, you’ll have to start.”  Tyrion lays out what Varys already suspected that he isn’t appreciated by his own family and the taste of power has made him love “the game”.  At that very point Varys seems to finally trust Tyrion fully and tells him of Daenerys and her three dragons.  Tyrion seems unconcerned considering they have bigger issues like a siege at hand but Varys’ reaction is interesting.  Varys as we have said before seems to be working with Master Illyrio to bring Daenerys back to Westeros but Varys ends the conversation with Tyrion saying “it’ll be years before they (the dragons) are fully grown and then there will be no where to hide.”  Varys seems fearful of the dragons and what they mean for the realm.  Once again the confusion of who is he serving and what his plans are become muddied even more. 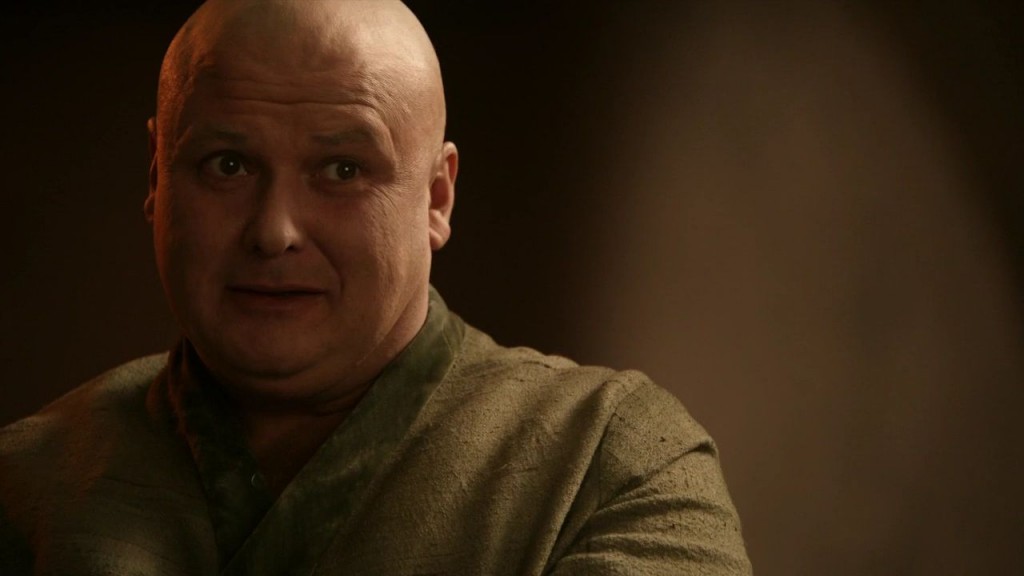 Season 2 ends with Varys explaining to Tyrion the Lannisters have won the battle but Tyrion’s father has received all the credit.  Varys, in a move of compassion, brings Shae to Tyrion’s side.   Varys is an enigma, wrapped in a riddle, covered in secret sauce.  Is he playing a game with us?  Saying one thing but really thinking another.  Making moves to throw off the other players or purposely moving them into positions he or maybe they want.   Does he serve himself or is there someone else?  If he does serve Master Illyrio then why does he seemingly work against bringing Daenerys back or is that all show for the other players?   Or as he explained to Ned Stark in answering his poignant question “Who do you truly serve?”, Varys replies “The realm, my lord.  Someone must.”  Is Varys this noble character truly serving the people of the realm?  I have a feeling it will be some time before we find out but that intense desire to find out is why this series is so great.  The answer to this question is eating at me and I’m sure everyone else.  Hopefully in Season 3, we see more of Varys and “the game” he is playing.  Next Spring can’t come soon enough.

Check out the rest of the cast in our ongoing character profile series here!