I really appreciate the style of format starting first thing in the morning and allowing the episode to take course over the day. Allows the stories to be fleshed out across the day in different ways and I know it was the same for season one but for some reason I’m just really vibing it even more this season. I mean, both are gorgeous locales but especially the Italian views of the city and water…it just calls to me.

This episode gives Albie (Adam DiMarco) and Lucia (Simona Tabasco) some more touching time. You know Albie is loving it, but the reality slaps him hard. She says she likes him and I want to believe her, but I’m wondering how many euro she likes him? He doesn’t have it but he’ll get it and it doesn’t even stop him from wanting to hang out. Albie, honey, I need you to think about this a little bit more and what could potentially come to be from just spending a shit ton of time with a prostitute you don’t really know. 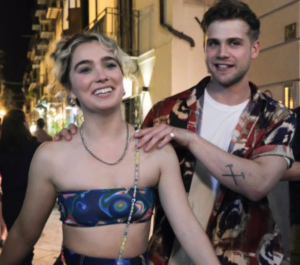 As for Portia (Haley Lu Richardson) she sneaks away from her morning after only to be told they are absconding away with the gays and Jack (Leo Woodall) to Palermo. Tanya (Jennifer Coolidge) is keen to feel important to someone, so the fact that anyone wants to host her and party with her is enough for her. Without hubs around, she might as well get someone to pay attention to her but dropping some annulment ideas would mean the solo life once more. Why not party it up in Italy for goods? Though less of a party for Portia running but also what an oddly sketchy moment with Jack. Won’t let a woman pay but will make them run from not paying, got it.

Then there are the married couples. Harper (Aubrey Plaza) does what she needs to get an answer finally out of Ethan (Will Sharpe). I want to like Ethan so much, but stop acting like such an asshat. Sure, you come clean. After she’s given you several opportunities to do so, but you’re shocked she doesn’t believe you? Jesus Christ Ethan, if you had told her the second she walked in the door when she got back like she’s done with you the whole trip maybe it would have stuck. It kills me that you won’t just touch her. I’ll touch her then. Aubrey Plaza is gorgeous. They reconvene with Daphne (Meghann Fahy) and Cam (Theo James) and go for a winery tour. Harper is feeling sassy and lets some shit loose. Daph and Cam are loving it, Ethan less so. He does drop some truth bombs about Cam’s “mimetic desire” and I have to wonder if Cam goes after girls Ethan likes then did Ethan at one point like Daphne? But Cam got there first? Once the whole foursome gets a little more buzzed, he shoots his shot with Harper and we’ll see where that goes. Meanwhile, Daphne reveals a little too much about her trainer and girl, if you dropped the bomb I think you dropped then DAMN. She tells Harper “do what you need to do.” So what exactly will Harper need to do? Or maybe who?

Family breakfast time and Albie admits he needs to get some funds. Such an odd cycle to watch within a family. Dom (Michael Imperioli) tries to warn Albie away from her, but come on, Dom. You can’t believe that will work. He’s a young guy who believes he can save this whore from her miserable life not realizing he could very easily be a fucking mark. This might just be a lesson he has to live. Dom then tries to warn Lucia away from his son, which again how can you believe this will work? She is just trying to make a living. I did appreciate the awkwardness between Albie and Portia as she’s on her way out. What a weird turn this took for these two. Conversations at dinner turn to cheating and though it’s quite a pot and kettle situation, it’s simple to Bert (F. Murray Abraham) because he loved her. He doesn’t see the harm he caused. Which is mildly infuriating since it sounds like his wife died a pretty sad, lonely woman. 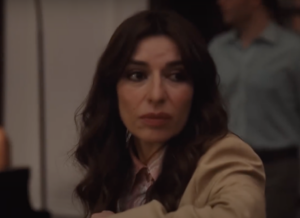 Valentina (Sabrina Impacciatore) attempts to get her flirt on with Isabella (Elenora Romandini) and I hope this is a constant theme for every White Lotus season. Please, please, please, Mike White!!! Always make the manager gay or at least bisexual. This dynamic has been so good so far and taken even further by the brilliant acting of Impacciatore. Her eyes and mouth capture emotional changes so beautifully. Even more so in the following episode. Mia’s (Beatrice Granno) still obsessing about that piano spot and trying to figure out her angle with Valentina. Talking about angles, remember when I mentioned Jack making Portia dine and dash? Well he drops her at her room, promising a return after doing something for his uncle. First of all, damn Tanya you cannot just wander in people’s houses like that. But also, don’t y’all have a door? My god, just there for anyone to see. 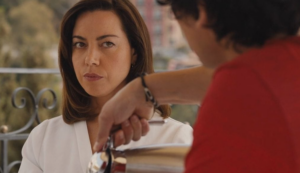 The view absolutely melted me as we dawned the next day. I really do need to plan a trip to Italy. Some couple is getting it on. Probably Albie and Lucia. Not Ethan and Harper, that’s for sure. He thinks she doesn’t believe him and yeah, I’m not surprised. You had every chance to come clean and you didn’t until forced to with the evidence. Of course, she’s suspicious. Especially knowing who you were spending time with. Aubrey Plaza’s acting in this scene just broke me. Utterly heart wrenching and yet so relatable. Meanwhile as Daphne and Cam wake up, they play their little mind games with each other. It just seems so exhausting to be that way with each other all the time about your relationship and lives. Just so tiresome. But do you, I guess.

Portia is having breakfast in Palermo in a freaking Godfather shirt. Really? Wardrobe had some interesting ideas this season especially for this girl. Tanya offers some not terrible advice but yet doesn’t reveal what she saw last night. Throwing the baby out with the bathwater keeping that one back. Just offering a vague warning isn’t really enough in my opinion. But also, you fail to follow your own advice, darling. Though her “noises in the night” comment was brilliantly cheeky. Jack and Portia go out for a day drive. He promises to have her back for the party later. Hopefully we won’t be seeing any more dining and dashing.

Back at the White Lotus, Cameron has failed to pay what is owed to Lucia. I’m honestly starting to wonder if Cam is broke. Like, it’s not canon but he asked Ethan about investing with him and it just feels like this guy is crooked. Lucia and Mia find Ethan and tell him they need to make sure his friend coughs up the dough. Unfortunate that his wife should then spot him, certainly doesn’t do anything in his favor. Yet, he could have also come clean with her right away. Mike White plays this relationship brilliantly because in the first few episodes they talk about so much, that you think this couple is great at communication. Yet, we come to see it’s quite the opposite and she has to coax the truth from him and now there’s a level of mistrust.

Valentina tells Isabella it’s her birthday and she manages to score a dinner date. Obviously, it’s clear Isabella probably doesn’t feel that way but is being a kind friend. Careful hitting on coworkers in any capacity, Valentina. You are a manager and it could be bad news. The family is having breakfast and searching for a translator for their trip to find their extended family. Of course, you can guess who Albie wants to bring. Dom isn’t thrilled but Bert tells him to play nice. I believe the exact phrase was, “Can’t you just be cool?” Which admittedly gave me the giggles.

Ethan confronts Cam, tells him to get his shit in order. I just don’t understand how these two ever became friends. Like even in just proximity of each other, I don’t get it. Especially how long after college? But Cam promises he’ll vouch for Ethan and now it’s time for even more mind games. Sinking as low as the couple she can’t stand, Harper herself starts fanning the flames of her husband’s own delusions. Okay, so what’s really happening here? I just cannot with y’all anymore. 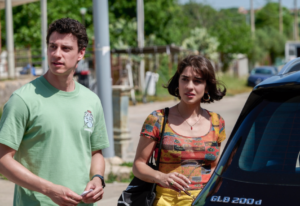 On the way to meet their extended potential family, Lucia reveals a scary surprise and twist of events. It doesn’t look great, I’ll give you that. But what’s even worse in their eyes is the homecoming they receive. Big mood for three women to be alone at the house and not give zero fucks about meeting them. In fact, I’m pretty sure the grandma cursed you and if I know anything about anything, you should be scared and you should absolutely be getting the fuck off her property. Albie’s not the only one dealing with suspicious behavior today. Portia’s stuck with Jack who is getting progressively more drunk even though she said she wanted to go back for the party. Cock hat aside, which made me pause so I could have a snorting moment, Jack is starting to seem really not cool and really not someone to be around for any longer than necessary. Girl, we gotta make better choices. It’s clear you aren’t getting back to the party and I’m worried you might not be making it back to your plane either. 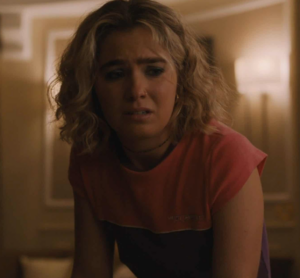 Tanya is falling into some kind of something. She’s so desperate for attention she’s missing the billion red flags about this situation. You found that picture. What do you think this all means? I’m going to need you to put the coke down, Tanya and try to focus. This is not an okay situation you’re in. Speaking of also not okay situations, once she’s ready for dinner Isabella tells Valentina that she’s not okay with her desk mate and he’s making her uncomfortable. Valentina’s fiercely ready to protect her staff, but didn’t manage to protect her heart. Isabella and Rocco (Federico Ferrante) are engaged. The acting of Impacciatore in this scene is top tier. The range of emotion across her face and lips was absolutely brilliant. She ends up at the bar, but not alone. Happy birthday to you, girl.

But it’s Albie and Bert who end the night the saddest. Bert because he won’t have any more homecomings. And it does break your heart to know how much he misses his wife and how lonely he is now. But also, you cheated on her and made her life miserable. So this feels a bit karmic. As for Albie, he found another wounded bird to save. Never mind that you’re just a naïve, fucking idiot but yeah, go ahead my guy. Save her. Take her away to L.A. with you. Let’s see how that goes.