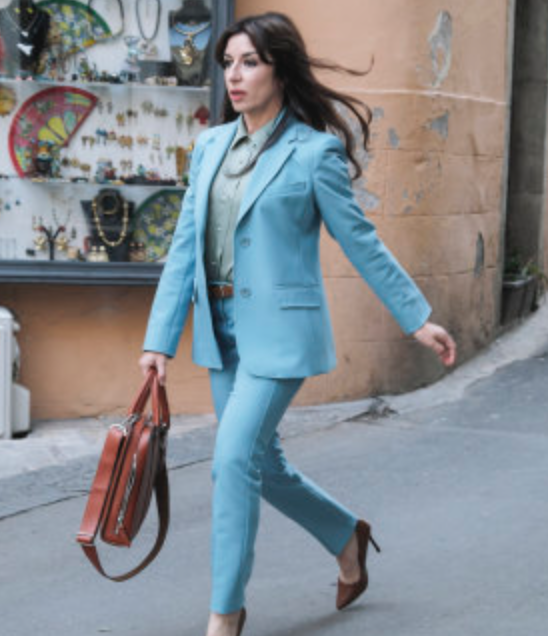 Back to back episodes in this review, giving this reviewer a break during a busy time of year. Episode three starts off giving us more of a glimpse into Valentina’s (Sabrina Impacciatore) life and personality. She’s quick to tell off men who bug her which is a whole mood, especially later given Harper’s own experience, I’m wondering if Italian men are just like extra horny or maybe there’s just more men in Italy? I don’t know, but the men there certainly seem to be working hard to get at it, but Valentina shuts them down. She’s also lonely. Eating lunch in the alley by herself feeding the alley cats. Sweet, but damn sad. She seems like a pretty sweet mentor to Isabella (Eleonora Romandini) and maybe the season won’t end too terribly for her given what mischief is sure to transpire at the White Lotus.

Meanwhile, Dom (Michael Imperioli) is pushing Mia (Beatrice Granno) and Lucia (Simona Tabasco) out of the hotel room the next morning. Bert (F. Murray Abraham) sees and calls him out on it at breakfast. Dom’s quickness to beg for Albie (Adam DiMarco) not to know is clearly so indicative of how Dom’s not going to change. If he really cared, if he genuinely wanted to put all this aside to do better, to be better for his wife, he should have no problem admitting to his son that he fucked up and needs help being held accountable to change. It is not easy changing a large portion of your life, especially something like an addiction or negative habit you’ve developed. Accountability is key and if Dom doesn’t accept that, I don’t think he’ll ever change.

Harper (Aubrey Plaza) is trying to be sexy for her husband in the morning and goddamn it, Ethan (Will Sharpe), JUST FUCK YOUR WIFE!!! She’s making such an effort right now and I am so pissed it’s being completely ignored. You spent so much time shitting on her not liking morning sex last episode and here she is trying so hard and you walk right past her. It’s Aubrey Plaza, for fuck’s sake. If you won’t have sex with her, I will. She tells him she’s gonna be nothing but sunshine today and he cautions her to be careful. It’s easy for that kind of gesture to come off over the top or insincere. 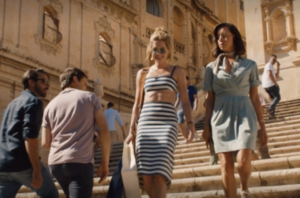 Doesn’t matter much in the end because it’s the quarrel between Cameron (Theo James) and Daphne (Meghann Fahy) at breakfast that set off the events of the day. Listen, it’s clear you guys both have interest in these other things. I’m not sure why you guys are so uncomfortable doing things separately, but it’s nice sometimes to do things away from your spouse. Though in this instance, she admits it’s all part of their game and I’m even more solidly on Harper’s side of things regarding this couple. Daphne knows more about Cam’s exploits than she lets on, but she wants it known that she isn’t a victim. I mean, if you don’t want to feel that way, fine. But let’s not pretend you actually have a happy marriage here?

Boy time doesn’t go much better with Cam being the total frat Alpha douche we expect him to be. He’s pissed that Daphne pulls her move but then again he also acknowledges there’s a bit of the game there for them. He also openly admits to Ethan that he’s unfaithful and I think it’s finally an eye-opening moment for Ethan as to who this person really is. You can spend time around someone, but it isn’t until you’re in closer quarters that you see who they really are. I was ultimately pleased Ethan made the big boy choice, but watching the phone ring with the background scene in action was brilliant cinematography.

Meanwhile for Portia (Haley Lu Richardson), she gets roped into then ultimately ripped away from a Godfather excursion tour with the family drama. How awkward for her to get this guy who is into her and like, “Come with us and have fun on your vacation! But while you’re with us, my family will also be dealing with multi-generational layers of trauma regarding cheating!! Sound like fun?” Albie is ultimately trying to educate his father and grandfather, but also trying to impress this girl at the same time. How about let’s not? Let’s do these separately. You go on an excursion with your family, tell them to stop being assholes who cheat, and then come back and take your dream girl for dinner. Luckily for Portia, Tanya (Jennifer Coolidge) needs her now that Greg (Jon Gries) has left. Tanya needs to see a fortune teller and I have a feeling something might not end well here. Especially for Albie who just doesn’t quite do it for Portia.

We see dawn again as episode 4 begins, following the aftermath of boys’ night. Ethan finally talks with Harper but not entirely cleanly. Oof, careful mate. This is dangerous territory you’re wandering into. At least Cam made it back to his own room with the ladies, not that he has enough money to pay them. The girls have a sad moment ultimately feeling the coldness of the job. There is no warmth. Once the transaction is done, there’s no kindness there. It’s possible Lucia wants something more or different, but she’s dragged Mia into this and given Mia notions of how she can use her body to get what she wants. But will that work out for her?

Dom’s trying to find jewelry and Isabella saves Valentina with a store suggestion. Jewelry isn’t going to save your fucking marriage, Dom. Changed behavior will! Albie wants nothing to do with it and I don’t disagree. He’s trying to hang with Portia, but Tanya has found the gays and with her new group comes a dashing young Brit. Sorry, Albie. I’d be over with Jack (Leo Woodall) too. He’s flirty and feisty and has an accent. Mhmm, accents. I will forever regret not hooking up with Australian bartender at the London hostel I stayed at but that’s neither here nor there just to say, women like accents and that does a lot more for Portia’s libido than Albie does. But now that he’s met Lucia, it’s just a straight up competition for sex.

Speaking of sex, when do we think Ethan will own up to Harper? Sorry Cam, but fuck bro code. You did something shitty, Ethan is under no obligation to you and the fact that Ethan didn’t immediately tell Harper actually really pisses me off. Which relationship is actually more important? And I swear to god if you have to think about it…If I were Ethan, I would be wanting to come clean to Harper as fast as fucking possible so that if…I don’t know…ANY EVIDENCE WERE FOUND, I would be able to say “yep, it wasn’t me just like I told you.” Poor Harper, I would be disassociating too.

But the funniest part of the episode by far was Mia’s misstep with the piano player (Federico Scribani). Terrible place to try and shag by the way, even as a reformed Catholic. But the clear miscommunication with Lucia who clearly didn’t care to try and help plus what was clearly not the correct pill was the perfect setup for hilarity. Is this Mia’s way in? Or are we just starting the body count?