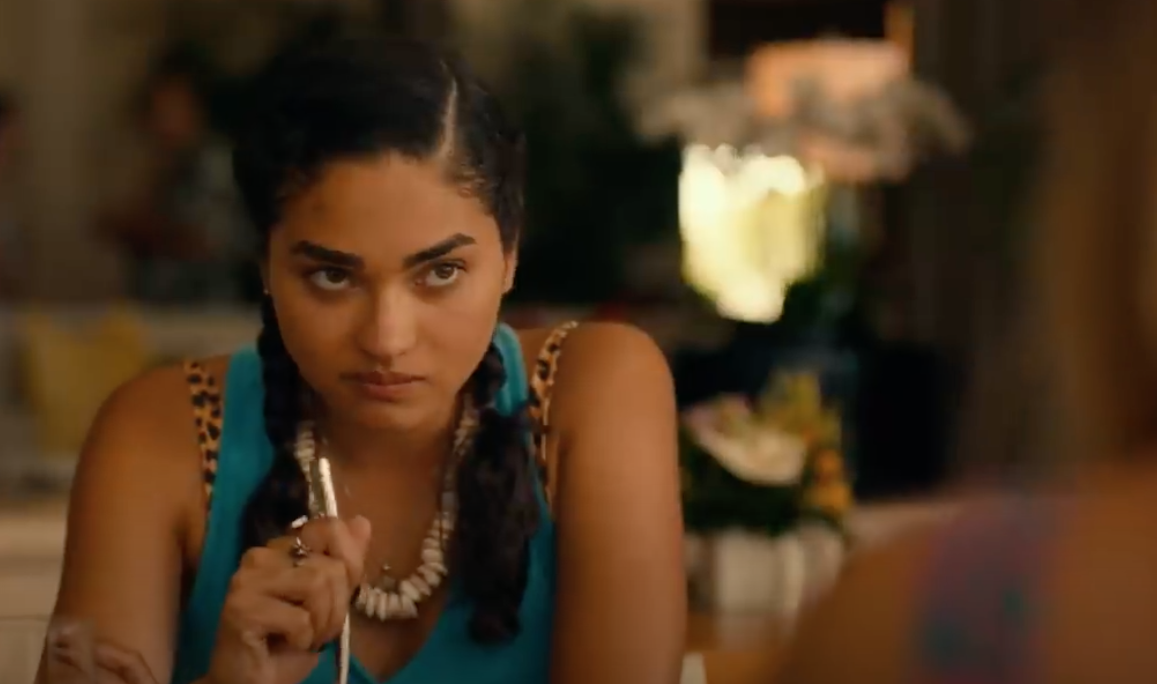 Let’s start by celebrating the insanely wonderful news that this amazing show is coming back around for season 2!  I’m so insanely excited to see what comes next. It sounds like a whole new location, potentially new crew and guests. Sounds like a dang great time to me. However, let’s not put the cart before the horse. We still have to finish out this delightful season and hang on folks, this one’s a bit bumpy. Kai (Kekoa Kekumano) pulls strings to get closer to Paula (Brittany O’Grady) and while he bares his heart, she keeps it real. This is a vacation and she’s in college. That doesn’t mean the feelings aren’t real, it just does mean it’s temporary. However, considering the title, perhaps she’s more attached than we realize. But she does want to help his cause fighting for his family’s land, even after he admits Olivia (Sydney Sweeney) tried to hit him up. Paula mentions the Mossbacher family has a safe with some rather valuable items and wouldn’t you know it?! They’ll be gone this afternoon while Mark (Steve Zahn) and Quinn (Fred Hechinger) finally really scuba dive. Paula is clearly done with this family and the privilege, and I get that. For supposedly being her friend, Olivia is a real piece of work. I actually swore at her out loud when she asked if Paula’s necklace had any value. It’s literally a family heirloom. Does it not occur to you that might be kind of important to her? Are you that dense or just that self-absorbed? Or both? Meanwhile, Quinn’s developing a real attachment to this place getting to know locals, and appreciating nature. Perhaps he’ll fall under the title too.

Then there’s mom Nicole (Connie Britton) and dad Mark who are not quite in paradise. She’s still balancing work and a lack of control. Hearing Mark talk about the affair made it feel like it happened a long time ago, but hearing Nicole talk about it I don’t think so. Nicole talked about getting away from it and considering they are now all the way on an island in the middle of the ocean I’m guessing it was far more recent. The sexual brush-off makes much more sense. She’s not ready to be vulnerable to him yet. So on top of all that and Olivia being a snarky B as well, no wonder she doesn’t want to be on the boat with her family in the middle of the ocean. This does however provide some complications for Kai. Though when all is said and done, the couple finally reconnected. 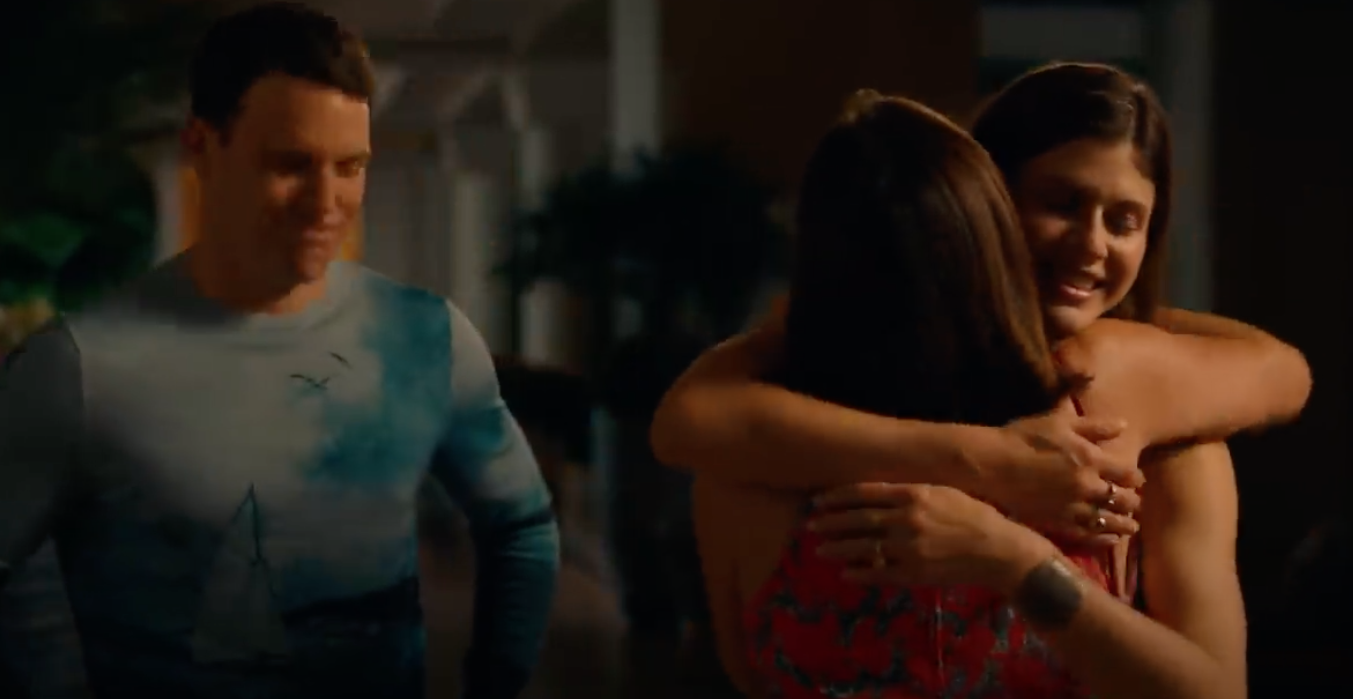 I know a couple having some issues with that. Shane (Jake Lacy) and his mommy (Molly Shannon) are thick as thieves since she crash-landed. Poor Rachel (Alexandra Daddario), she’s really seeing what marriage is going to look like and it is not pretty. She needs to explain to her husband their marriage is not polygamous or incestuous as it does not include your f*cking mother, Shane! Stop telling her things that are private and personal to your wife! Or perhaps, Rachel will simply bail. I’m not entirely opposed to the idea of being a trophy wife, but certainly not to that man with that mother-in-law. What about Rachel’s happiness? Well, Armond (Murray Bartlett) got them into the Pineapple Suite finally after Shane witnessed his office antics. Things are catching up to Armond and it’s a wonder how much farther this downward spiral will go. Dillon (Lukas Gage) certainly remembers and is using it to his advantage. 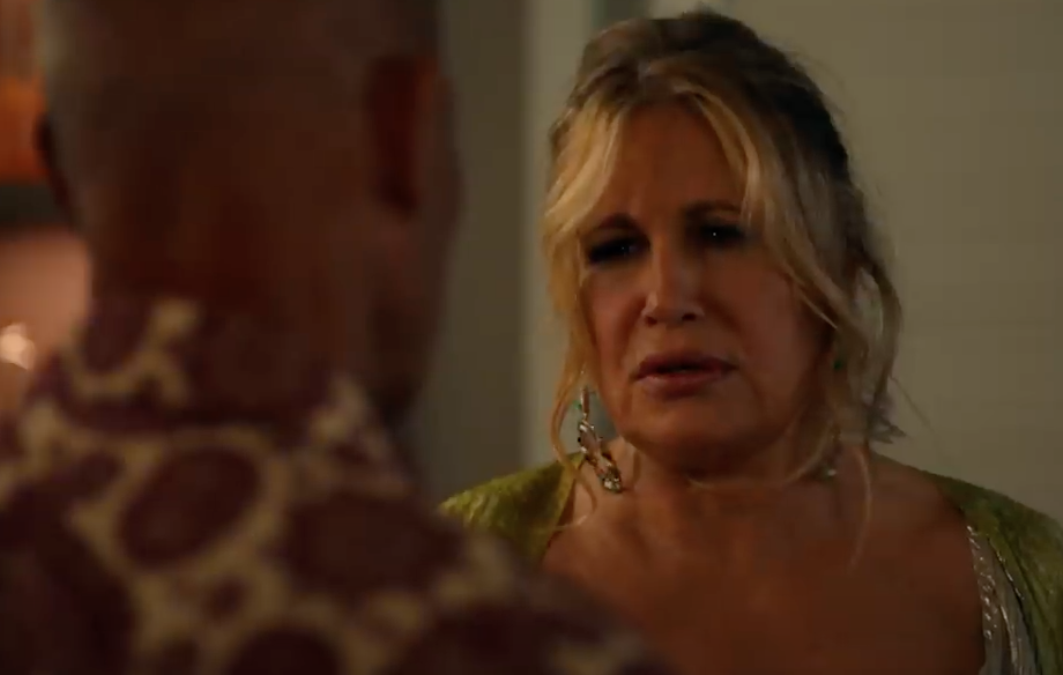 Tanya (Jennifer Coolidge) is having her own spiral. She had a decently pleasant hook-up, but what now? What next? She admits to Belinda (Natasha Rothwell) who she really is. All about those onion layers like Shrek, but mainly needy alcoholic. Jen absolutely crushed that whole scene. I mean, all her scenes honestly. But that one, in particular, was quite funny, and when she finally does open up to Greg (Jon Gries). But while Tanya has a flirtation, Belinda is trying to be all business. Oh dear, I did say I was concerned. When someone keeps saying repeatedly they want to give you your own center, obviously, it’s hard not to get too excited about that. But if she can’t pump her brakes she might scare the whole deal away. And with only one episode left, we’re running out of time. The usage of light was stunning again in this episode, particularly contrasting light against dark. The scenes of Hawaii have been so entrancing, so I can only hope next season is just as stunning. White Lotus Key West or White Lotus Bahamas or White Lotus Dubai?  I don’t know, but I’m on board!