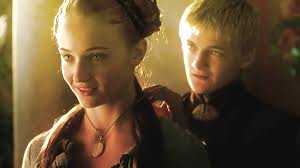 Out of all the character on Game of Thrones, it seems as if the eldest Stark daughter receives the most hate. When first introduced to viewers, Sansa appeared to be the epitome of a proper young girl in this type of society. Having her framed by rebellious and independent siblings, Sansa easily became classified as the weakest link in the Stark dynast

For the entirety of the first season, Sansa had one objective. She was completely focused on her love for her darling Prince and grooming herself to become the perfect wife for him. Her greatest problem was whether or not she would be able to produce a male heir, or if she would be doomed to bear only female children. Even after the tragic execution of her beloved direwolf, Lady, it was impossible for the copper haired beauty to see any fault in the young prince.

Sansa perfectly represents the element of “courtly love” that we don’t see very often in the show. In fact, almost all of the marriages deal with arranged marriages, political alliances, and feelings that either grow or whither throughout the marriage. Sansa believes herself madly in love, the way most girls her age do when they find their first boyfriend. Her entire life revolved around Joffrey and all of the things that could happen in their future. She was tragically in love with the idea of “being in love”. Sansa’s younger sister, Arya, calls her out of this fantastical belief numerous times throughout the first season but the older girl is too wrapped up in her own illusions to heed her warnings.

The betrothal between Sansa and Prince Joffrey is the first example of exactly how the adults in her life use her. Despite her father’s obvious love for his children and initial dismay of promising her to such a vile boy, he agrees that a union between the Starks and the Baratheons is long over-due. In a resurrection of the initial betrothal between King Robert and Ned’s late sister, the two families hoped this would solidify their power.

Sansa soon learns that all of her bright dreams are merely fantasy when the world begins to turn upside down around her. She’s seized by the guards and told that her father is a traitor. She begs with her future husband, sure that he will extend kindness and mercy. In a perfect example of a tragedy forcing a young woman into adulthood, Sansa has to watch her father beheaded. Any little girl facing the death of a father is sure to take its toll and the added dismay behind Joffrey’s betrayal very nearly puts the Stark child over the edge.

However, Sansa exceeds expectations (though she receives little credit for it). She attempts to accept the transition from the fiancé of the Prince, a girl that each person in the castle treated with respect and kindness, to the hostage daughter of a traitor. She is forced to keep her head held high and to remain a perfect lady even after the decapitated heads of her father and nursemaid are paraded in front of her.

Let’s focus for a moment on the dynamic scene in season two where Joffrey calls Sansa to the throne room to “question” her about her brother’s, war efforts. This is the first moment when the dehumanization of Sansa is brutally clear. No longer is she treated like the coveted future bride of the King. She is treated as a prisoner of war, as a slave, as something of no worth- as a pawn for a means to an end.

The amount of foreshadowing in this one scene is staggering. Those who have read the books probably would have been able to pick out the irony of the scene, but those of us only watching the show wouldn’t have seen it until this point in Season three. All three of Sansa’s future betrothals play some kind of pivotal role in this one scene.

It is Loras who states all of the crimes committed by the Stark armies; information that leads to the drastic action the new King takes. Joeffry then announces that a message must be sent to Robb Stark and orders his guards to beat her. In a horrifically sick display, he tells them to “Leave her face. I like her pretty”. The King urges them on, claiming that Robb Stark couldn’t possibly hear her unless she screamed louder, and tells them to strip her.

The only thing that ends the chaos is Tyrion Lannister stepping in and putting a stop to it. He extends kindness to her, ordering someone to give her a cloak to cover herself, and helping her from the room. After apologizing to Sansa for his nephews actions, he asks whether or not she wants to continue the engagement. When she replies, in a cold and detached voice, that she is loyal to her King, Tyrion smiles and tells her, “Lady Stark, you may survive us yet.” The truth behind this one statement is almost unnerving.

Sansa is the only Stark to have survived at King’s Landing without being put to death or being forced to flee. She is the only one who is literally living in the lion’s den. Many fans choose to focus on her “weak nature” and the fact that her other siblings are out there actually fighting the war, they choose to ignore the fact that this is how she is surviving. Sansa is playing the Game of Thrones in the only way she possibly can.

As the seasons progress, we begin to see Sansa in a different light. She is no longer the pawn of the Queen, used at a whim for various tasks. Enlisting the help of Shae, Sansa attempts to hide the evidence of her flowering so that she wouldn’t be forced to marry Joffrey after finally realizing the cruelty inside of him.

One of the main reasons why Sansa continues to survive is because of her ultimate worth to the Realm. People quickly begin to realize the power the young girl holds, deeming her the “Key to the North”. With Robb Stark struggling to win his battle, Arya on the run, and both the younger brothers presumed dead: Sansa is the only Stark who has maintained some sort of respect in their society.

The Tyrells wish to align with her and solidify their new power in the kingdom by claiming the North for Lordes as his sister, Margery, moves into the position of future Queen. Baelish is conspiring to whisk her away to the Vale and keep her for himself. Meanwhile, The Lannisters show just how deep their territorial instincts go when Tywin devises a plan to marry Sansa to his own son, Tyrion.

The three most pivotal players in King’s Landing have finally seen the hidden power Sansa Stark holds and there’s no telling what they’ll do to have it for themselves.

When compared to the other characters, women such as Daenerys Targaryen who excel at breaking against the traditions laid out for them, it’s easy to forget all of the admirable qualities Sansa portrays. Despite the subtlety to her approaches, one must keep in mind, that it is because of these courtly manners and perfect etiquette that Cersei Lannister, a fan favorite, is as powerful and virtually unstoppable as she is. She bought into the “tradition” and because of that, was afforded opportunities that eventually landed her in the Queen’s chair.

Sansa Stark has shown time and time again that she has what it takes to survive, and even excel, in a Game that has led to the death of so many people before her. 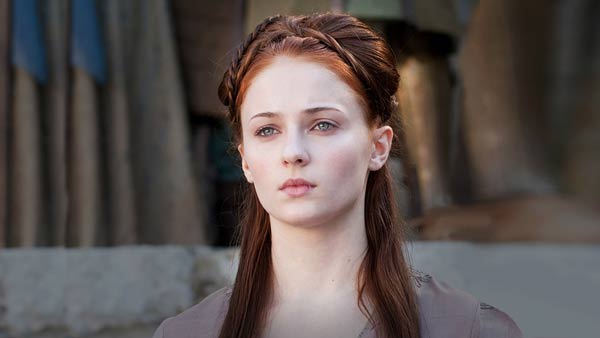