Wow, this opening episode sets things up for high stakes right at the beginning and leaves you wondering for an hour what will play out; only to drop you at the end of the episode with a dropped jaw and some serious questions. If the premiere is this intense, my heart is pounding at what will happen over the course of the season and even more excitement for the live-action theater broadcast. Let’s dig into the premiere episode of The Third Day!

We meet Sam (Jude Law) at the edge of a road, anxiously having a phone call. There’s been a burglary and a suspiciously large amount of money is missing.  Like a seriously suspicious amount of money.  Cue my Scooby-Doo ears perking up, wondering who the hell this dude is and why he has that much cash lying around? Well stashed presumably, but it’s gone now.  And no police phone call? The plot thickens. Sam makes his way through the woods, ending up by a creek. After an emotional moment with Florence + the Machine, he drops a small shirt in the creek and it floats away. Now, I’m not one to prescribe colors or patterns to any children and tell them what they should wear. But on a gut feeling, that black and white striped shirt probably belonged to a little boy. 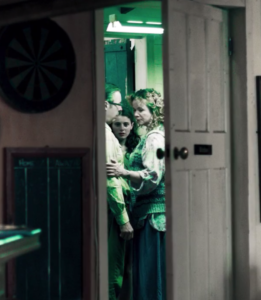 While making his way back through the woods, Sam happens upon a girl Epona (Jessie Ross), a boy, and a rather startling interaction with some rope. After he saves her, he tells her he’ll take her home which she says is the island of Osea. Cue the immediate Wicker Man vibes. Available by causeway only during certain hours if the day because of the tides, we’re getting a sense of foreboding about heading to this island.  Sam is suspicious about returning Epona to her home, considering she won’t admit why she wanted to die. But when the Creepy McCreeperton inn owners (Paddy Considine & Emily Waters) get involved you start to wonder who is the danger here. These two give me creeper vibes from a mile away.

The island is preparing to host a music festival along with their own religious festival in order to bring in money to the island. Not a bad tactic, but this place doesn’t look nearly as warm and friendly as Fyre Festival did. But there’s work being done to the phone lines which means service is nearly impossible. How convenient. And weird costumed characters “sniffing out evil” add to the mood roo; no, that’s NOT creepy.  Everything is either salt or soil after all…and I’m starting to think that’s going to mean something later.

Sam starts asking questions but he isn’t the only one. Eventually, we understand he’s a father with two girls and…a boy and that something very, very bad happened to his son. But he needs to gt off the island ASAP and wouldn’t you know it, he gets distracted by Epona in his rearview mirror and when he arrives at the causeway…well, you can guess – washed out. So, now Sam is stuck on the island and finds himself making a friend. Though it didn’t start on the right foot. Jess (Katherine Waterstone) is excited about the festival and studies their culture and lore. She gives him some insight into the bacchanal the founders of the island created and I’m starting to get a sense of the impending doom here. “It was a fucking blast. Three people died.”  Not a blast for those three people though, eh?  Eventually being stuck in, everyone gets to drinking and having a blast.Make some upside-down cross symbols and sing a creepy tune about swimming off the island for Sam. Throw in some bloody chunks and what do you know?  It’s just a typical Friday night!  But it wasn’t the scary villagers leaving my jaw-dropping at the very last moment.

“Grief wants mayhem and chaos and havoc. It wants its pound of flesh.” I can’t wait to tune in next week! The thriller, horror vibe was set very well and I’m curious to learn more about the characters. Sam has a lot to explain. I want to know why Jess is so fascinated with this island and all their creepiness. I mean really, who would step foot on this island and think it was the place to be? Apparently for the next few weeks, I’ll watch and see what’s waiting on Osea Island. 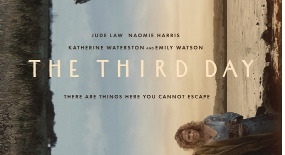