Man alive, this show has me hooked! Just when I think I’ve wrapped my brain around coming close to figuring it out, something happens and I’m left questioning everything again. Is there more to Sam (Jude Law) than meets the eye? Is he potentially the nefarious one? Or is it still the creepy cult island? Perhaps, it’s just a few outliers who are perverting the religion and making things violent? Regardless, still don’t trust Creepy McCreeperton Inn owner (Paddy Considine) but let’s wade through the causeway and digest this episode.

After a night of drunken revelry and suspicious wanderings in the woods, Sam and Jess (Katherine Waterston) wake up in bed together.  Oh dear, this won’t be good.  Also, why do shows and movies always insist on depicting drunk people having sex when in reality, it doesn’t work quite that way?  Whiskey dick is a term for a reason.  But in particular with her own past, this could have serious ramifications for Jess.  And frankly, it seems like part of that ship has already sailed if smelling weird things makes you want to vomit…granted, you were trashed last night so it could be a hangover. Or… that thing you were worried about is already cooking in your oven.  But for now, Sam opens up about his past.  His son’s murder, the connection to this place, the anniversary of his death… Sam says things feel like he’s seen them before and he admits to going to the woods every anniversary of his son’s death.  Is it possible grief is clouding his memory?  Could he be experiencing a fugue state of some kind?  This is where I’m starting to question if everything Sam is saying is true… 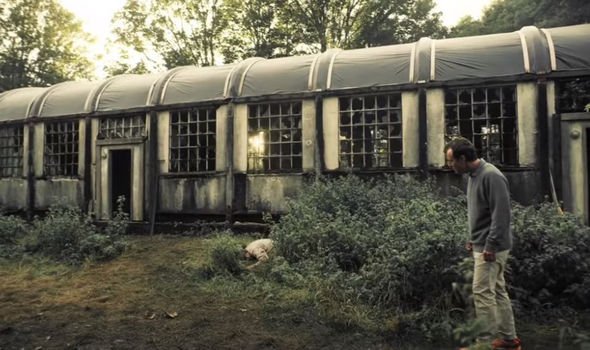 He’s desperate for answers and shoes, apparently.  I chuckled a bit seeing the bright orange trainers she gives him because damn, they’ll be able to spot you easily.  Also, where is all that cash?  Does he even remember it?  I have too many questions!!! He clearly needs a break from life, but stealing a bunch of your own money, making it look like a robbery, and running away to a remote island with little phone access is something else entirely.  It’s a plot.  For now, he’s wandering the island looking for answers, seeing what mischief he finds.  Clearly, a religious ceremony of some kind is taking place and even though I question Sam’s mental state, you can’t deny that’s some damning language the pastor is using.  When you speak about sacrifices being made in a place known for human sacrifice, people are gonna read into that.  Sam encounters Epona’s father Jason (Mark Lewis Jones).  Grief is a powerful force and between the grief and the religion, I’m starting to wonder if there is anyone actually sane on this island. Trying to get in touch with someone on the island with information about his son’s death, everything is narrowing in on Sam.  People want him gone but he needs answers.  Yeah, me too, Sam.  Celtic triptychs are appearing on RVs and in photographs.  An ancient trilogy of gods using a few methods of sacrifice, like hanging which seems familiar… Could his son have been a sacrifice?  But you know what this situation definitely needs? Acid.  BECAUSE GOOD CHOICES, that’s why.  This show is throwing me for a loop and I freaking love it! The acting across the board has been phenomenal and though I’ve seen some complaints about the cinematography, I think it fits the trippy story perfectly.  I can’t imagine how epic the immersive theater experience will be when it comes around.  One continuous camera shot dropping us into the world of Osea and bridging us the second act.  We have one more episode in “Summer” and I know I’m anxiously awaiting any answers I can get.