Press information about the transitional live theatrical event associated with THE THIRD DAY is purposefully vague and yet intriguing. Here, via an official press release, is all we know about it; thus proving that the event is just as mysterious as the rest of the limited series.

On Saturday, October 3, THE THIRD DAY will feature a special live theatrical event “Autumn” to enhance viewers’ experience of this six-episode 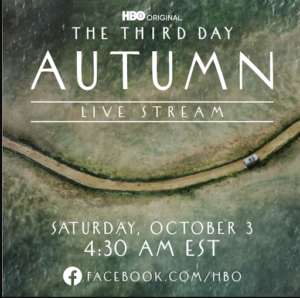 For viewers who seek more of THE THIRD DAY, “Autumn” will allow them to be immersed in the world of the show on the island of Osea. A unique live event broadcast online, “Autumn” serves as a bridge between the three episodes of “Summer” and the three episodes of “Winter” while not being requisite for enjoying the limited series. Featuring members of The Third Day cast including Jude Law and Katherine Waterston, viewers will follow the events of a single day in real time. Florence Welch will also feature in an acting role.

Capturing events live and in one continuous take, this cinematic broadcast will invite viewers deeper into the mysterious and suspenseful world of THE THIRD DAY, and blur and distort the lines between what’s real and what’s not. It is created by theatrical innovators Punchdrunk and co-directed by founder and artistic director of Punchdrunk, Felix Barrett, and “Summer” director Marc Munden, with Sky and Punchdrunk producing.

It is not just intriguing and mysterious, it is quite unique and odd as well. Who has the 12-hour patience to watch it unfold? I’m sure a couple of us at HBOWatch will give it a look. Then, get ready for the second half of THE THIRD DAY entitled “Winter.”