On paper, Michael Peterson seems like a good man. He has a big family, beautiful big home, he is a war veteran who is also running for Mayor. His five children are all either at college or going to college and he has a beautiful, successful wife. However, underneath all of that, all the bravado at big parties and machismo for the cameras, there is something very broken and sick, rotting away at the core. The Staircase is a 8-part mini-series delving into the real life story of Michael Peterson and his wife, Kathleen’s, suspicious death. While the mystery around her death is at the centre of this story, there are many other twists and turns along the way. 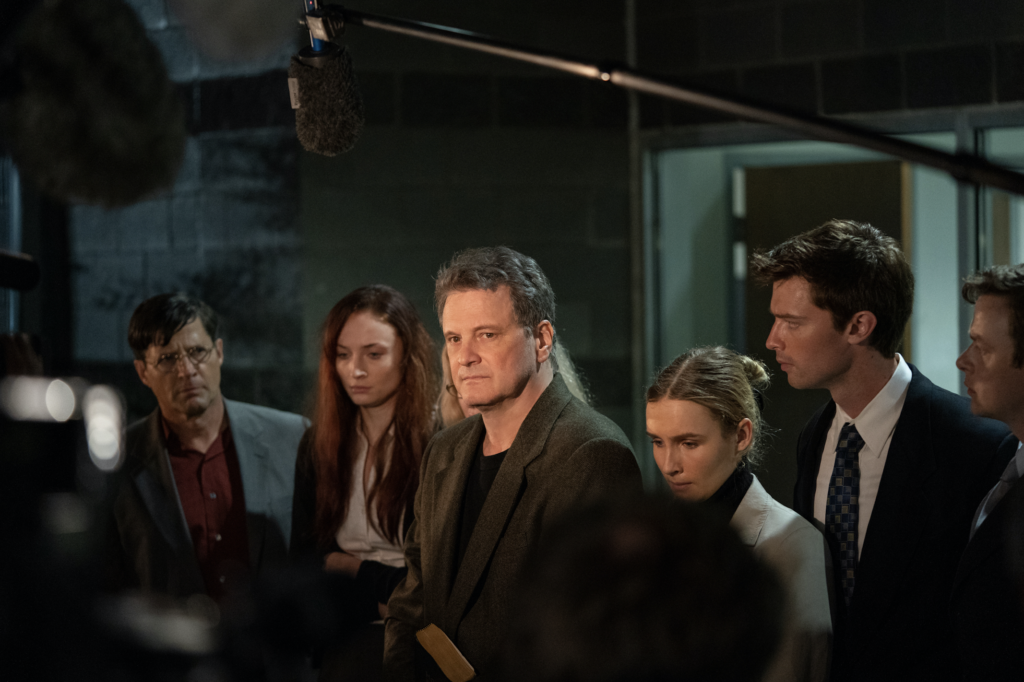 The story is quite simply this, on December 9th 2001, Michael Peterson called 911 frantically regarding his wife who had fallen down the stairs. Once emergency services arrived, they realised that something about the matter in which her body was found was not conducive to a fall down the stairs. She was in a large pool of blood which was scattered all over the walls. Peterson was indicted by a grand jury and a charge against him was made. This show is about him trying to prove his innocence. 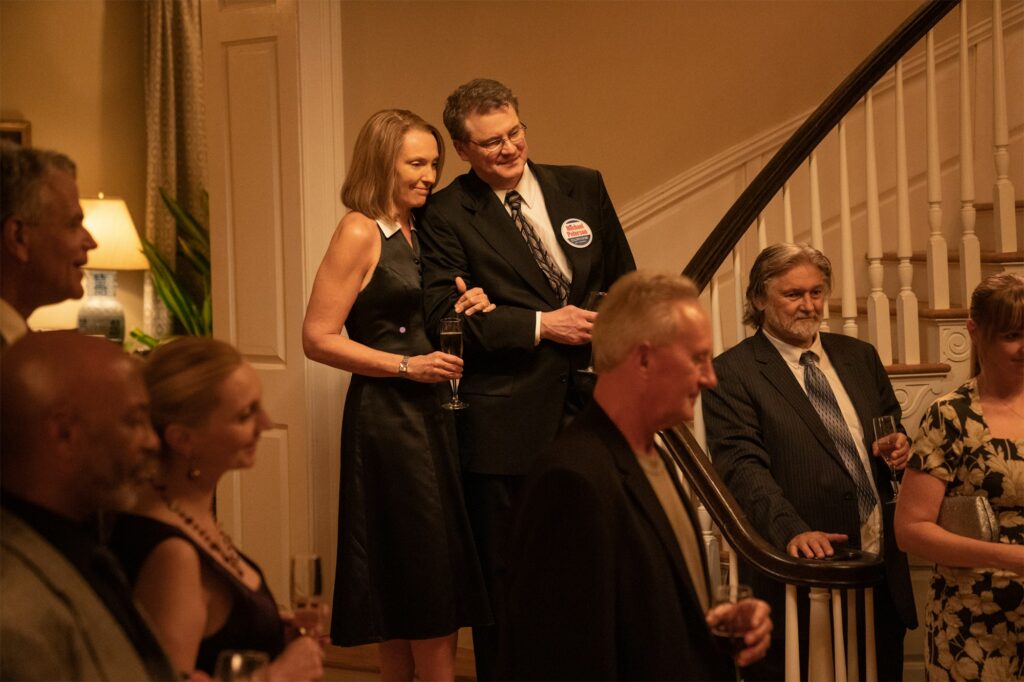 The first episode opens on the 911 call Peterson made upon discovering his wife at the bottom of the stairs. Then through two different timelines, one of December 2001 when she died and one of September 2001, three months before she died, the first episode manages to paint a picture of this very interesting family. How Kathleen, the matriarch of a blended family of 7, holds down a stressful job, supports her husbands political endeavours and also runs her household, takes care of her children and…drinks. Todd and Clayton Peterson are Michael’s sons from his first marriage, who both seem to be constantly vying for their fathers respect and admiration, at the cost of their own relationship with each other. Margaret and Martha are Michael’s adopted daughters, their mother who was a close friend of Michael and his first wife, Patricia, died after falling down their stairs. Their father had passed away years before so Michael adopted them. Through Margaret and Martha’s friend Caitlin, Michael met Kathleen, Caitlin’s mother. With all this in mind, Kathleen who married Michael in 1997, has taken on four other children, all in their mid-teens. This alone is going to put a strain on relationships and the sibling relationships are very odd amongst that, as we see during a dinner table scene where Margaret snaps at her brother for suddenly referring to Kathleen as ‘mom’, something he never did while she was alive.

The first two episodes focus on specific and key moments from the case. Michaels lawyer David Rudolph (Michael Stuhlberg) recruits a team of specialists to go to the house and recreate how Kathleen could fall down the stairs and injure herself in the manner to which she did. With multiple deep lacerations on her scalp but not a single fracture, they deduce that she fell back onto the corner of the door frame and fell again while trying to get up. This seems to be enough for Rudolph who doesn’t think they will ask any more questions about the injury to her neck (conducive to strangulation) or the scratches on her face. We then get to see this theory played out as we watch Kathleen come to a pretty gruesome end, according to Rudolph. As grim is it may be watching her choke on her own blood, it still just 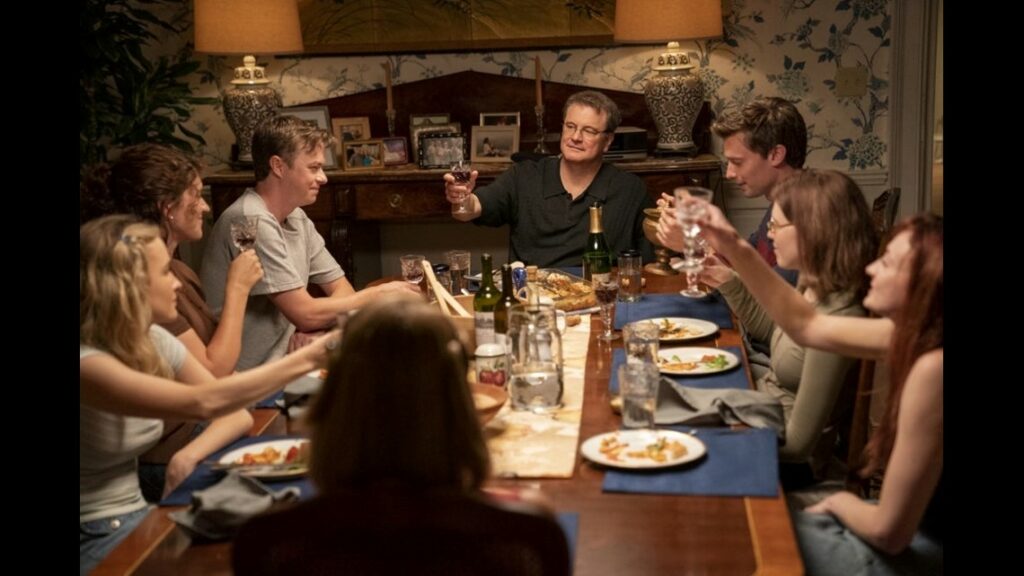 seems so infeasible to the average viewer. This is the heart of the case, that the injuries Kathleen sustained do not match those of someone who died after falling down the stairs and people start to suspect that Michael is guilty of foul play. Later on in episode 2, we are introduced to two french documentarians, presumably Jean-Xavier de Lestrade, who goes on to make the docu-series which is now on Netflix. Only Rudolph is encouraging of the documentarians, thinking it could help Michael get his side of the story out, but to everyone else this seems like a bad idea, and with it the persona of Michael Peterson is born. The persona of the guy who is running for Mayor, the guy who lied about getting a Purple Heart, the guy who adopted his dead friend’s children, the novelist, the guy who hid his bisexuality from his family and engaged in homosexual relations with men, while married to Kathleen. A very complex guy indeed.

If you haven’t seen it, the documentary series The Staircase, currently on Netflix, shows everything we are seeing in the dramatisation as real-life. In the docu-series, Michael Peterson is very much the main character, lapping up the attention from cameras, turning on an on-screen persona at the flick of a switch. This very much comes across in Colin Firths portrayal of Peterson. He has got every single mannerism down to a tee, from the way he walks to the inflections in his speech. In addition to this, Toni Collette who plays Kathleen, breathes life into a character who we have only ever seen in photographs or police footage of a bloodied corpse at the bottom of some stairs. She creates Kathleen beautifully and despite being relatively newly married to Michael at this point in her life, she seems a bit tired and fed up but totally supportive of her husbands endeavours and she so lovingly dotes on all Margaret, Martha and Caitlin. We are yet to see much regarding her relationship with her sons, but judging from Todd’s initial reaction to her death, there doesn’t seem to be a whole lot of love there.

There is a lot more to unravel, and watchers of the documentary will be well aware of what lies ahead of us, but to anyone else, buckle up.

The Staircase is available to stream on HBO Max now.