If you’re anything like me, then as soon as the calendars hit October 1st you’re immediately binge watching all your favourite horror films and TV shows. There is a sensationally spooky selection all ready for streaming from HBO Max, which includes some of my personal favourites and essential Halloween watches! 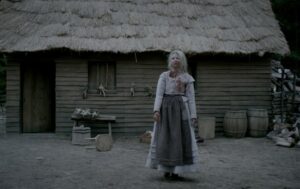 Directed by Robert Eggers (Northman, The Lighthouse) The Witch takes place in New England in the 1630’s as we see a puritan family cast out from their village, forced to make a life for themselves on the outskirts of town. What makes The Witch so utterly terrifying is the absolute bleakness of their existence, where everything they do is shrouded by strict Christian lore and their one priority is simply to stay alive. They build a nice enough farmhouse and the mother has another baby, making the total number of children in their house 5. The eldest is Thomasin who is on the cusp of womanhood, her younger brother Caleb, twin siblings Jonas and Mercy and their new baby Samuel. However, in the woods that surround their home lives a witch who steals baby Samuel kills him and grinds up his body into some kind of tincture. The Witch now haunts the family, preying on the children and their innocence until things just descend into an utterly dark and chaotic space. Don’t let the Ye Olde English language put you off, this is unsettling, horrifying and glorious all at once. 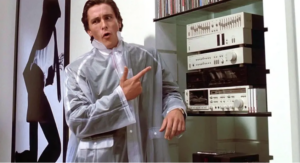 From a psychopathic witch to a psychopathic Wall Street broker, this film adaptation of the notorious Bret Easton Ellis book is an energetic, frenzied cinematic experience as we are welcomed into the life of Patrick Bateman who is a successful, rich, handsome 26-year old Wall Street whizz kid who enjoys the finest New York restaurants and women. Patrick is also a homicidal maniac and takes pure joy out of murdering people and dismembering their bodies. With a killer performance from Christian Bale as Bateman and a very young Reese Witherspoon as his girlfriend, this bloody mess of a film will be sure to keep you entertained. 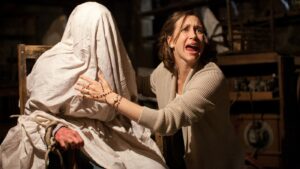 Arguably one of the best Hollywood horrors made in recent years, The Conjuring tells the true story of the Perren family who moved to a new house only to discover it is haunted by a malevolant spirit named Bathsheba who possesses the mother and terrifies the living daylights out of her children. It also tells the story of Ed and Lorraine Warren, real-life demonologists who have spent their entire professional lives trying to convince the world that ghosts are real. There are of course some creative liberties taken but the truth of the actual haunting that took place is enough to send chills down your spine. Watch, enjoy and grab a cushion. 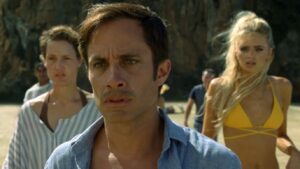 From M. Night Shyamalan comes this controversial and audience dividing film about a group of people who take a trip to a secluded beach, while there they find that they start ageing rapidly, but they cannot find a way off the beach. Some are children, some are elderly but this interesting film makes you just feel a bit on edge. Shyamalan always divides audiences with his films and promises an epic twist to the tale, Old is no exception and whether you enjoy it or not, there is no denying that this is just a down right freaky film. 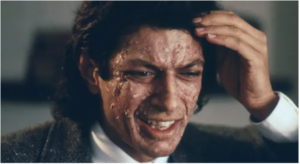 Thats right, a young, hot Jeff Goldblum turns into a hideous, grotesque fly in David Cronenberg’s legendary science-fiction horror. Scientist Seth is trying to come up teleportation devices he calls ‘telepods’ but in one of his experiments gone wrong he accidentally fuses himself with a fly that rapidly starts to take over his body. Using only prosthetics and make-up Seth becomes one of the most graphically disgusting creatures in movie history. Well worth a watch, but probably not while eating dinner.

If none of these take your fancy, have a look at the extensive Halloween collection for yourself! Not only are there some George Romero 1960’s classics on there, but some Korean horrors, British horrors and the latest release in the Halloween franchise Halloween Ends. So what are you waiting for? Get streaming people!

What are you watching this Halloween?