“Anything can happen to anyone, but it usually doesn’t. Except when it does.”
– Phillip Roth, The Plot Against America

“Part 1”
The world right now is not exactly a happy place to live in, bluntly speaking. Countries, and communities, stand more divided than ever. Fear-mongering and hate-mongering are at a peak. And now we get a glimpse of what would have transpired in the 1940’s and beyond, if a certain someone by the name of Charles Lindbergh would have become the most powerful person in the world in 1940, instead of a certain Franklin D. Roosevelt. For those who may not know Lindbergh’s backstory, he single-handedly gave wings to the aviation industry, when in 1927, he undertook the first solo transatlantic flight, from New York to Paris. He was ALSO thought to be a Nazi sympathizer, famously declaring that the three most important groups pressing for American involvement in the Second World War were the British, the Jews and the Roosevelt administration. 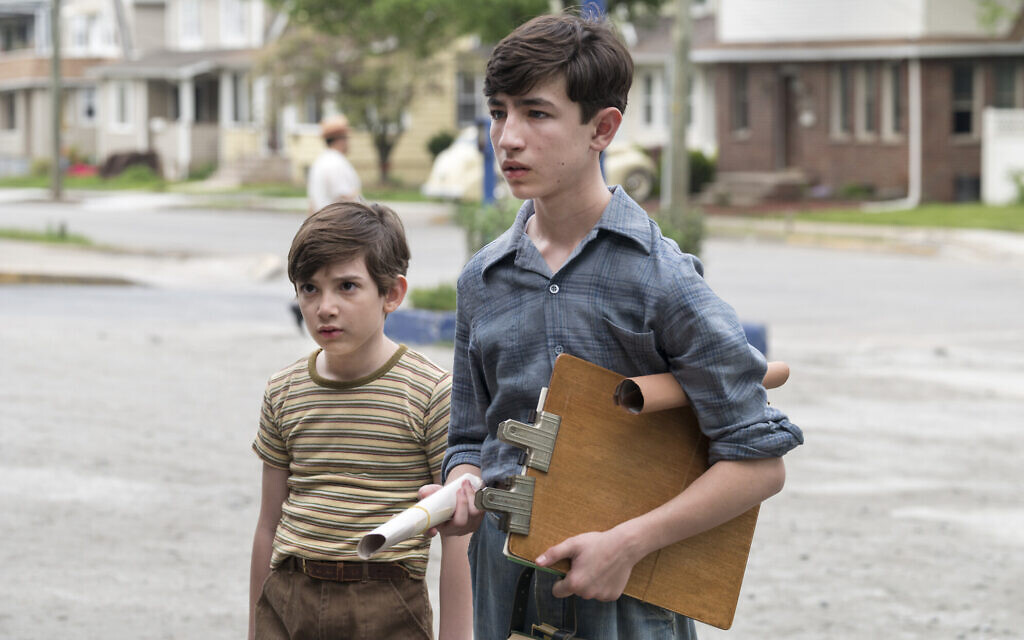 So, what would have happened if Mr. Lindbergh ascended to the Presidency? We see that through the eyes of the Levin family, with Herman Levin (played by Morgan Spector) being a successful insurance agent, living with his wife Bess (Zoe Kazan) and two kids, Sandy and Philip. Herman has just been offered a bigger paycheck, and a move to Union, which is a suburb that would result in them being the only Jewish family there. Oh yes, also in this new neighborhood is a German-style beer garden. As they pass through it in their car, while looking at their potential new home, they are unsurprisingly heckled – “Go back to Delancey Street! Hey, Juden!”, while the kids stare wide-eyed from the back of the car. Herman, having stayed within the confines of a Jewish community, is bothered by this, although not too much, while Bess knows the feeling of being like an outcast,  having been the only Jewish student in her school days. For Harvey, it would have been a minor inconvenience to move into a new neighborhood; for Bess, it would be a risk not worth taking.
We are also introduced to Bess’s elder sister Evelyn (Winona Ryder), who is having an affair with a still-married man in New York, and frankly, hasn’t done well to keep it a secret. Another character we are introduced to is the rebellious young man Alvin (Anthony Boyle), who is Herman’s nephew, having been taken in by him when his parents died. Alvin, we learn, is also a troublemaker, having been understood to have stolen money from the garage he was working at. “The things we do for blood”, says the garage owner when Herman promises to pay back the stolen money. Alvin’s definitely would be an interesting character arc that I hope sews well into the show’s theme.

On to the main plot. We see Herman talking about his not-so-subtle contempt of Lindbergh’s policies, after hearing his latest speech where he declares refusal to work under the Roosevelt administration. The scene perfectly captures the tendency of humans to avoid their nightmares. As Herman says “Roosevelt’s a politician, he’s a leader; Lindbergh’s just a pilot with opinions”, it feels like he is convincing himself that ‘No, this won’t happen’.
It’s too bad then, that it would. As his neighbor tells him, they know about the actual Lindbergh in their community, but for the others, he is a hero pilot in a small plane. Hitting the point that people, sadly, would see the world through Lindbergh’s eyes from now on. We also see Sandy, who is an excellent artist, hide away his portraits of Lindbergh in his box, his awe and admiration for the pilot presumably turning to shame, and partly fear, of his father finding his son’s ‘contemptuous’ portrait.
Herman also listens to the radio broadcast by Walter Winchell, reveling in their common anti-Lindbergh stance. It is at this moment that the wheels turn in the episode, when Alvin is thrown out of the house for his misdemeanors. So Alvin goes out with two of his friends, pre-planning an attack on the ‘fascist’ people at the beer garden at Union, knocking down two of them senseless. The scene is an intense one, with Alvin’s actions interspersed with Herman watching the latest war news, witnessing German domination, Swastikas flying over people’s heads in France, as well as Imperial Japan, a Nazi ally, carrying out a similar routine across South East Asia.
The series creators, David Simon and Ed Burns, have not taken the subtle route here, going for a very compelling and frequently intense watch. It helps that the episode does not have many stuffed storylines, thus keeping the focus strongly on the plot. We will definitely stay tuned as to how the plot unravels, unless some of you have read the book. And we would find out an answer to the question that Philip asks innocently to Herman at the start of the episode – “Dad, isn’t this our homeland?”

Before you go, get a glimpse of what is to come:

While you’re at it, why not check out HBO’s accompanying podcast for the show?