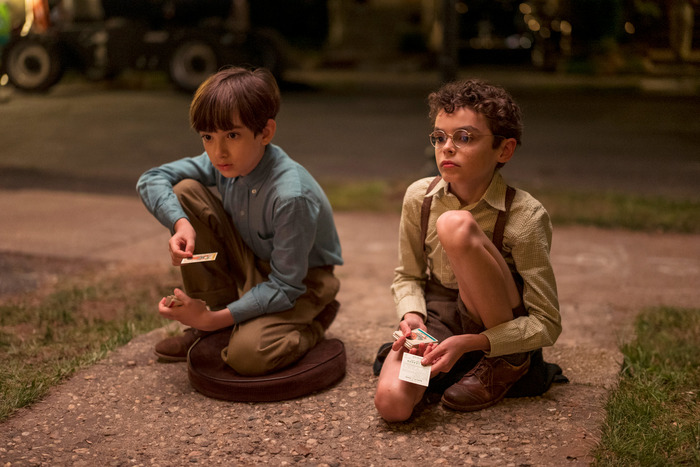 The Plot Moves Forward, But The Country Moves Backwards, In An Eventful Third Episode

Things have turned upside down pretty quickly for the Levin family. In the past two episodes, we saw Philip engage in the usual childhood hijinks with his friend, Sandy drawing horses, and Herman and Bess doing their impersonations of Gracie Allen and George Burns to put Philip to bed. Happy days, eh? Well, those days are gone. As Mr. Lindbergh ascends to the President’s throne, the Jew-bashing crowd can now come out in full force, marking Swastikas on gravestones, (possibly) removing Jewish families from their booked hotel rooms, and we will definitely see more atrocities in the coming episodes. The episode tries to end on a somewhat cheerful note, but in the end, it doesn’t (we will talk about that later). 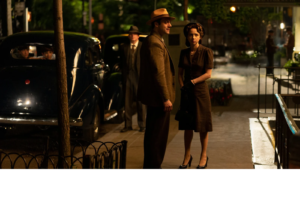 We get to see Philip’s terrifying dream at the start, as every stamp in his collection turns to an image of “The Führer.” Bess takes him to the doctor, who says that many Jewish kids are having similar dreams. Bess understands that the kids are feeding on their negative emotions, to which the doctor replies “But are we wrong to feel this way? And are they?” True words.

Meanwhile, Evelyn has completely bought into Rabbi Bengelsdorf’s ideas, whose program called “Just Folks” is ready to be put on the road. His program’s first entry? Why, it’s Sandy! The boy’s been sent off to Kentucky by the end of the episode to live with a “farm family” where he expects to draw horses and other farm animals. Although I am guessing that the only things he will be drawing are some harsh truths about the U.S. of A.

Also, we get to learn that Germany has kept marching on, crushing every country in its path; now the British are being bombed left, right and center. This brings us to Alvin, who is about the only person who has been ready to take some steps if Lindbergh comes to power. As he joins up with the Canadian military, to “kill Krauts,” he proves to be a deft hand at their training. And he’s got a girlfriend now (things are finally looking up for him!). In a bare-all moment, he confides in his girlfriend that “he was a Jew because he was born a Jew and the whole world wishes he wasn’t.” Not too wrong there, but Alvin really is a guy for whom the world is black and white. The boy’s mind is filled with revenge.

The episode moves fast once the Levin family leaves on a trip to Washington for a stay at a booked hotel. On their second day of sight-seeing, they go see the Washington Monument, where Herman’s unfiltered comments about F.D.R and the not-too-charitable ones about Lindbergh help to alienate the people around him (such as the many Lindbergh supporters, as well as Bess, who is scared ever since they reached the place). Next, they are thrown out of their hotel, due to an alleged “mix-up,” as the receptionist says. But Herman suspects otherwise, and the police, predictably, aren’t much help.

Thankfully, they have a very good guide in Mr. Taylor, who in a later scene at a restaurant, stands up to a Lindbergh supporter who was looking for a fight with Herman. It’s good that the episode does not say what the guy’s political leanings are – he is doing what is right and understands civility and politeness in the true sense. This leads to the episode’s best moment, where Herman sings a song “On the banks of the Wabash, far away” as a tribute to Mr. Taylor, who was a teacher at the Wabash College. Mind you, Herman has a very good voice, which melts Bess, puts a smile on his kids’ faces, and leads to an ovation from the restaurant crowd. “No encore,” he says. And this moment also causes him to change his mind about agreeing for Sandy’s enrollment in the ‘Just Folks’ program, which he strongly opposed before. The world for him, unlike Alvin, is not so black-and-white, and he believes and prays for the goodness in people.

The episode could have ended at this point, but the writers of the show chose to opt for a bleaker approach. For all of Herman’s pro-war stance, even he would have changed his mind seeing Alvin in bed, with his leg missing (presumably from a bomb going off). The last shot sees Alvin being left alone in a treatment room, as his girlfriend leaves him in his tattered state. Oh war, the necessary evil!

Check out the promo for Episode 4 before you go: