“I cannot comment on that at this time, but you will be the first to know once we have information.” Throughout this second episode, Detective Møller directly yet politely provides this blurb to the press. On one occasion, he learns that the incident is now known as the “Submarine Case,” a moniker that shifts the case from a professionally covered mystery to tabloid material.

Møller and his team receive several tips over the police station’s hotline, one being crucial. A caller claims to have taken pictures of the submarine while on a dinner cruise; this is verified to be factual once said pictures are faxed over. With that,  a new possibility emerges: did the journalist leave the submarine on her own accord and board the cruise vessel? All new information must be documented, verified, and scrutinized by the entire investigative team (pictured, part of the team – Dulfi Al-Jabouri as Musa Amin and Laura Christensen as Maibritt Porse). The process seems rather straightforward, yet director/writer Tobias Lindholm’s succinct dialogue and superb actors keep our attention. No one is merely going through the 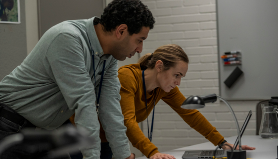 motions, we feel the exhaustion and frustration of the team. In one particular scene, a friend of the accused insists that this person could not have harmed the journalist. Yet, this friend avoids questions when asked about the accused’s fetishes, fantasies, and temper, even though it was that friend that triggered the investigators to inquire.

Møller attempts to procure the journalist’s laptop from her parents. Mr.Wall (pictured, below) is very reluctant, for he is adamant about protecting his daughter’s sources. Like flies on the wall, many viewers may see this a nonsensical. Why would a father hamper the investigation of his missing daughter? Is his daughter not more important than her own work? The Investigation really shines with these nuanced scenes; small details are equally as important as the more prevalent evidence. Eventually, the parents come in to supervise the transfer of their daughter’s computer files into police evidence. Møller informs the couple that a media outlet is preparing to release a story that alleges their daughter and the accused were in a relationship. The distraught parents explain to the investigators what the pictures on their daughter’s computer correlate to in her work. They go into vivid detail about her environmental and political journalism. The parents paid attention to their daughter; they can explain the journalist’s works as if it were their own. 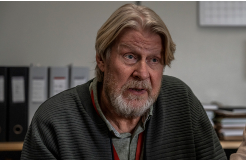 Therefore the father was appropriately apprehensive about relinquishing the laptop: The journalist’s latest work may be one of the last remnants of her life, and the parents don’t want to share this with the inquisitive and emotionally uncaring world. A world that is now turning their daughter’s unknown fate into a sensational headline to sell newspapers and garner ratings.

As  Møller is driving home a call is received that compels him to perform a U-turn. The body of a female has washed ashore on a beach in Amager, Denmark! The Investigation returns next Monday at 10pm ET on HBO.