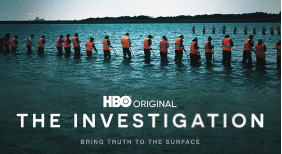 Too soon. This idiom is frequently used by journalists and critics when a contemporary work of literature, television, or film depicts a recent tragic or controversial event. Often, accusations of sensationalizing or exploitation are garnered when attempting to dramatize material derived from actual events. This criticism was prevalent in films whose subjects and release dates were about and near 9/11 and the COVID-19 Pandemic. Regarding the latter event, HBOMAX’s Locked Down was criticized for having little substance; poorly using the ongoing and unresolved global pandemic as a convenient palette. Conversely, The Investigation is a welcomed crime drama set against the backdrop of an actual homicide, for it does not embellish the evil actions of the perpetrator.  Nor does this limited series exploit the tragic homicide of journalist Kim Wall. Rather, this Danish series takes the viewer through the exhaustive processes of a criminal investigation. For those unfamiliar with the Wall tragedy, please read the below excerpt from a September 2020 BBC article.

Kim Wall was killed after she boarded Peter Madsen’s homemade submarine in Copenhagen harbour in August 2017. Her mutilated body was discovered on a beach by a passer-by 11 days later.

Madsen was sentenced to life in jail in 2018 when a court dismissed his claim that Ms Wall’s death was an accident.  The confession was made to a journalist who secretly recorded more than 20 hours of phone conversations with Madsen in jail for a documentary series.

In the Secret Recordings with Peter Madsen, which will begin airing Wednesday, the inventor answers “yes” to a question asking if he killed Ms Wall.

“There is only one who is guilty, and that is me,” Madsen is reported to say.  Madsen had previously admitted to chopping up Ms. Wall’s body and throwing it in the sea, but maintained her death was an accident. 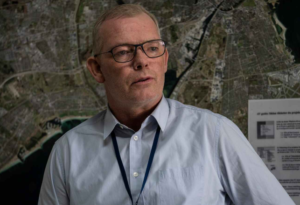 Two-time Academy Award-nominated filmmaker Tobias Lindholm takes the helm and script duties of The Investigation. We open with lead homicide detective Jens Møller (Søren Malling, pictured) sitting in on a trial of a man accused of murder. After the gavel, Møller and the prosecutor Jakob Buch-Jepsen (GoT‘s Pilou Asbæk) discuss the acquittal of the man. Both genuinely believe that the court has just set a guilty man free. They base their assessment on fact, and not emotion or outside influences. Buch-Jepsen wants the man to serve his debt to society, and not merely to pad his conviction rate but to advance his career and secure the re-election of local politicians. The objectivity of these civil servants sets the tone for the series.

Møller reports for his shift the next day, and criminal activities are updated at the daily briefing. With his next case, we are only told that Kim Wall and Peter Madsen have not returned from what was meant to be a short underway on the latter’s homemade diesel submarine. Foul play is an acute possibility and Møller takes the lead. When the submarine is found sunk in shallow water, the press releases information to the public that will certainly rattle the nerves of the Wall’s family. Møller is sensitive to this and contacts Wall’s parents, Joachim & Ingrid 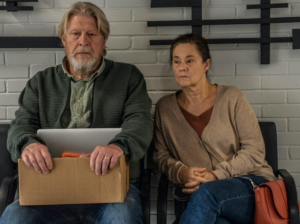 Wall, (Rolf Lassgård & Pernilla August, pictured) immediately to avoid them hearing the news from tabloids. The parents are emotionally distraught; their demeanors suffice for Kim Wall never appears in this telling. Lindholm could have elected to show a grisly murder and a killer attempting to cover his tracks but, instead, he entices the audience by showcasing the prowess of the investigators. It is about the investigation after all. We see forensic analysts, salvage teams, and the detectives utilizing all their skills and resources to locate missing persons at sea.  The details of the crime are recreated through the evidence gathered by these investigators. You will see no flashback of the incident.

Eventually, the Navy and police locate and raise the sunken vessel. The scenes detailing the recovery showcase the bravery, planning, and machinery necessary to execute such operations. When Møller receives word that Madsen wants to talk, the team is baffled when hearing of Madsen’s confession of disposing of Wall’s body, yet claiming her death was an accident. Møller and his team mistakenly believe that a murder or unfortunate accident are the only two possibilities. Unexpectedly, a third possibility emerges; a possibility that will further the detailed process that is The Investigation. 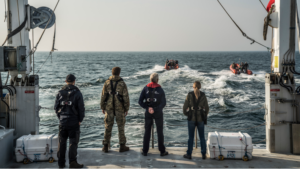 Will you watch the second episode to explore these possibilities? Find The Investigation Monday night at 10:00pm on HBO and also on the streaming sites. It is time to bring truth to the surface.