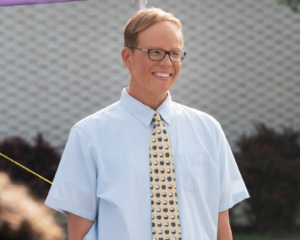 This episode opens with Joel (Jeff Hiller) assisting with church duties, including pet blessings. Which sounds like something he’s done at least once before, having a run-in with somebody’s beloved pet. He’s utterly adorable with everyone, but especially the kid. Of course, the pastor would notice but she’s seeming a little sus. Perhaps, she knows about choir practice? Not sure yet, but I wish I had a Joel in my life. For Joel however, now that the pastor wants a special meeting the anxiety rash is on!

Meanwhile, Tricia (Mary Catherine Garrison) is hustling for her business with a big event coming up and especially trying to get attention from the Chamber of Commerce, this is important. The rainbow pillows were cute, but it does certainly bring some unwanted attention. She’s struggling to get it all done though, while it seems her business partner has it a tad easier. I mean, she mentioned like three errands but geez, Charity (Heidi Johanningmeier) it’s not that bad. Not like you have to stay up all night making tiny pillows with lavender in them! 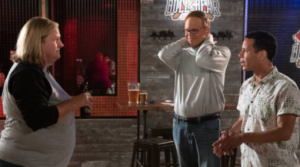 Sam (Bridget Everett) finally gets her chance to confront Rick (Danny McCarthy) after stalking him obsessively for a while. The whole scene was priceless though because Sam talks a BIG GAME for actually not being able to confirm anything. I don’t know, I’m not so sure it’s just drugs. Feels like something else is going on. Speaking of something else going on, when is Sam going to realize how badly she’s third wheeling here? I mean, c’mon girl. It’s so obvious and while it’s okay from time to time to hang out with your new friend, you can’t monopolize his company. He’s still seeing someone and needs to put time in that relationship. Michael (Jon Hudson Odom) finally makes his point but also gets her an assist. Maybe it’ll turn into something. Or maybe she just needed to get laid. It could be either or even both of these things.

It’s Pops (Mike Hagerty) who is really struggling though without the queen of his castle (Jane Brody). And I get that it’s awkward to acknowledge those family struggles. No one wants to spread around to the whole town that someone’s an alcoholic or drug user. But most people around figure it out if it’s consistent enough and given what we had seen of MJ before rehab, people would know. But he’s scared things will change. And frankly, he’s not wrong. I doubt it’ll be that “falling in love in rehab” scenario, but maybe in addressing why she drinks she’ll come to learn some things about herself and her relationship that she might want to change. I hope that everything works out for them, but the reality is it might not. 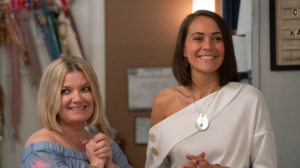 It does work out and doesn’t work out for poor Joel. He comes clean with the pastor after a very sweet endorsement of how he could use his gifts for the church. I appreciate that he didn’t want to lie to her anymore. But it still hurts. Puppies do cure everything though, so you came out on top in my opinion. Everyone turns out for Tricia’s special night, including a gussied up dad and Rick saving her behind. See what I mean? He feels guilty and is compensating so I feel like it’s gotta be more than drugs. Sam saves the day and I feel like this was a really great moment for Tricia to understand how her sister is a) smarter than she gives her credit for, but also b) she loves and is there for you, Tricia!! And yet, you are so mean and nagging about her life choices. Reevaluate a little bit, girl. Your sister isn’t as bad as you think she is. Your husband on the other hand needs a good slap across the face, and I just wish Sam had gone and given it to him.