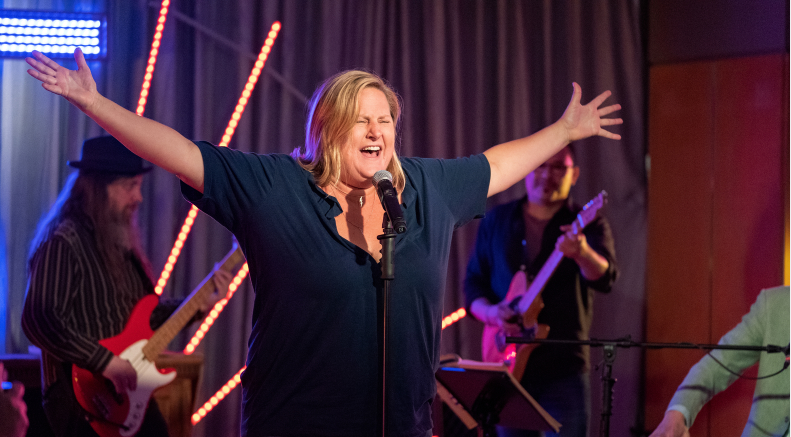 Well, it didn’t take long for critics to take a shine to Bridget Everett. Her HBO venture SOMEBODY SOMEWHERE, after only airing a few episodes into its first season, has been renewed for a sophomore run. Starring and executive produced by the comedian and singer, the seven-episode first season debuted January 16, with new episodes airing weekly on HBO and HBO Max. The season one finale debuts on February 27. HBO Watch is reviewing.

From Mighty Mint, Duplass Brothers Productions, and creators & executive producers Hannah Bos and Paul Thureen (writers on HBO’s HIGH MAINTENANCE), the series follows Sam (played by Everett), a true Kansan on the surface, but, beneath it all, struggling to fit the hometown mold. Grappling with loss and acceptance, singing is Sam’s saving grace and leads her on a journey to discover herself and a community of outsiders who don’t fit in but don’t give up, showing that finding your people, and finding your voice, is possible. Anywhere. Somewhere.

Amy Gravitt, executive vice president, HBO Programming opined: “Bridget Everett brings such warmth to the screen, it’s been an absolute joy to see audiences share a sense of belonging with this ensemble. We’re delighted to have Hannah and Paul remind us all where we come from in another season of Somebody Somewhere.” A few critical shoutouts include The Hollywood Reporter hailing the show as “quietly revelatory,” while IndieWire called it “a must-see heartfelt delight.” New York Times hailed Everett’s performance as “subtle and stunning,” with Vogue calling her “sensational.” And Rotten Tomatoes indicates that many really like the show.

But where do you stand? As of this writing, we are only three episodes into the story and yet, there seems to be a connection. Everett’s character Sam just seems to be meandering through life, not fully living as she wants to. Is it because Manhattan Kansas is just that bad? Or is it because she just can’t find a happy place as she is worried about family (her parents are played by Mike Hagerty & Jane Drake Brody), all the while clashing with her one sister Tricia (Mary Catherine Garrison)? On top of that, she still cannot get past the death of her other sister and can’t get a handle on her work responsibilities. She is truly muddled and meandering.

This is not, however, a depressive, gloomy show for those who haven’t picked it up yet. What are you waiting for? Helping with the humor is Sam’s co-worker and pal Joel played by Jeff Hiller. He adds spark. And there is the music. One happy place in Sam’s life is music. Just watch the show and you’ll see how it all fits in. And now, we know there is more to her journey. We will have a second season in 2023 of Sam’s journey through mourning, healing and happiness with Joel by her side and music on her lips. SOMEBODY SOMEWHERE.

Just in case you’re not familiar, there’s this –