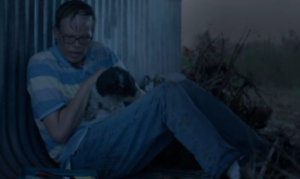 Everyone is bracing for the incoming storm, especially Joel (Jeff Hiller) who now has a little furry one to consider. He’s clearly a little detached and that’s not surprising considering the dog was probably the biggest impulse buy of your life. Not to mention dealing with the drama around choir practice, Joel probably has a lot on his mind right now. Impulse buying animals is not a great strategy, honestly. I’m not saying it’s necessarily a bad thing, but that’s a whole other life you’re responsible for now. Including tornado watch chase sessions. I was cracking up when he was commenting about the last time the dog peed in the car, but I was about to ready to turn the TV off if Joel didn’t go running after that poor baby in the storm. Phew, thank you for being a good person Joel, I can keep watching the show now though I suppose you should hunker down.

Meanwhile, Sam (Bridget Everett) is having to reconcile coming clean with her sister Tricia (Mary Catherine Garrison) regarding what she’s seen. And honestly, I completely get Sam’s hesitation. Based on every interaction we’ve seen, I would super suspect Tricia to immediately get defensive and blame Sam. Especially knowing who the horizontal tango partner is. I get it. I saw one of my parents cheat on another one of my parents via a hasty kiss in the kitchen when I turned a corner. I never said anything because I didn’t know what to do, so I get it Sam. “She’s a bitch, but she’s also my sister.” And I have to give massive props to Tricia when she finally gets the news. The whole vomit thing was hilarious, but also she doesn’t blame Sam. She starts piecing things together herself and realizes her sister is not trying to hurt her but help her. It was a pretty cute little tornado bonding session.

Everyone makes it through, perhaps a little worse for the wear for Sam and Trish. Easy on that hidden stash of momsies. But Joel also manages to do okay, apparently not far from Sam since he happens upon them. And now is when the real fun begins. Tricia knows neither is answering their phone, likely meaning they are currently together. Small town equals limited number of motels for sneaky sex. Doesn’t take much to find them but damn was it satisfying. I figured Tricia for a slapper. That gut punch was a nice touch. But also now Tricia’s life is in essence about to go completely to shit and I hope Sam can help her weather that. It felt like their sisterhood turned a corner so I hope we get to see more bonding moments between them in the future. Earlier in the show, Tricia commented how it was always Sam and Holly. Maybe now Tricia gets a chance at the sisterly relationship she always wanted.