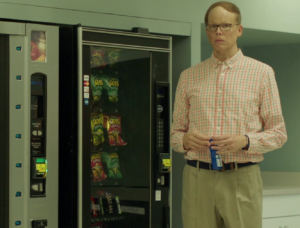 We reconvene after the storm and see how the dust landed.  Joel (Jeff Hiller) is needing some more Sam (Bridget Everett) attention.  He seems surprisingly unbothered about things ending with Michael (Jon Hudson Odom) which is interesting since they seemed like they had a good thing going. But overall, he’s relatively chill about it. Hmm, seems weird. I’m really hoping they aren’t going to angle him to have a thing for Sam. Please, please, please no. They have a really great friendship going and I don’t want a romance between them to ruin it.

But Sam’s on a roll and cannot stop for Joel’s shenanigans. She’s pushing through at work. Even her manager or mentor or whoever thinks Sam has future potential and growth available there. Which is of course enough to send Sam running. You and me both, girl. As soon as she mentioned manager in a few years, I was like, “RUN GIRL.” Because here’s the thing, that’s not a place Sam is going to want to stay long term, just like I wouldn’t. Because growth there in the job doesn’t necessarily correlate with personal growth and that’s really what Sam needs.  Joel is not a huge fan, which is fair. No one likes losing work friends. But she wants to do better for herself and she should. 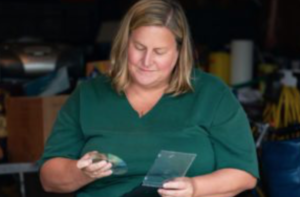 It doesn’t take long into sitting down that memories pop up for her, especially about Holly. My mentor is going into hospice for stomach cancer, so honestly this hits pretty damn close to home right now. And seeing Sam push through that grief to try and do better hit me in the feels. But it’s hard to do better for yourself when everyone else’s shit keeps hitting you in the face. A short visit to the gravesite hits some hard truths especially how deep the drinking goes.

Momma (Jane Brody) seems to be doing well in rehab, but how well? We don’t fully know how Tricia (Mary Catherine Garrison) is doing right now, but Dad (Mike Hagerty) is clearly nervous. He’s worried if his wife will be the same person, if she’ll still love him. The whole scene with the doctor was hilarious because the tension is so palpable. Mom sets off right away about who’s the pretty one, the dramatic one, but it’s who is left unsaid that causes concern. How the actual hell could you not discuss your daughter who died from cancer? Seriously?! Do you not think that fact makes a difference? I mean, you were clearly like this while she was still alive but I’m sure burying your child is going to contribute to your alcohol issues. How utterly devastating for Sam and Tricia. And honestly, I get why Sam came to get you. Your dead daughter doesn’t even have a gravestone because of your issues. You won’t talk about her, so frankly I see Sam’s point. Doesn’t seem like momma has much invested in changing or getting better here. 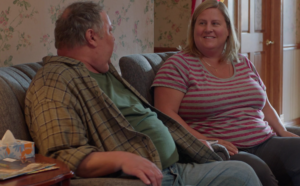 But the real kicker of the episode is Trish and Charity (Heidi Johanningmeier). I’m gonna be honest, Tricia played it well but she’s a better person than I am. Let’s be honest, if you told her husband about everything what are the odds she’d still want to be business partners? Probably low, right?! Well, then you could have told the truth and gotten rid of her! Tricia probably needs to have a business partner, but man I wanted to see her tell the truth. Because you have no one to blame but yourself, Charity and I wanted to watch your world crumble. That pillow was pretty clutch though, I think I’ll take one myself.