The absurdity of Sally4Ever continues as Episode Three sees cracks in their relationship start to show and Emma revealing her true colors during a friends dinner party. Last week’s episode began to allude to the unraveling of Sally and Emma’s weeks’ old relationship while accompanying David to his mothers following the passing of his father, but the final scene certainly seemed to indicate that all was good between the sheets for the lovestruck lesbians. However, as this episode shows us, there is far more bubbling beneath the surface as psychotic Emma and boring Sally come to blows on more than one occasion. 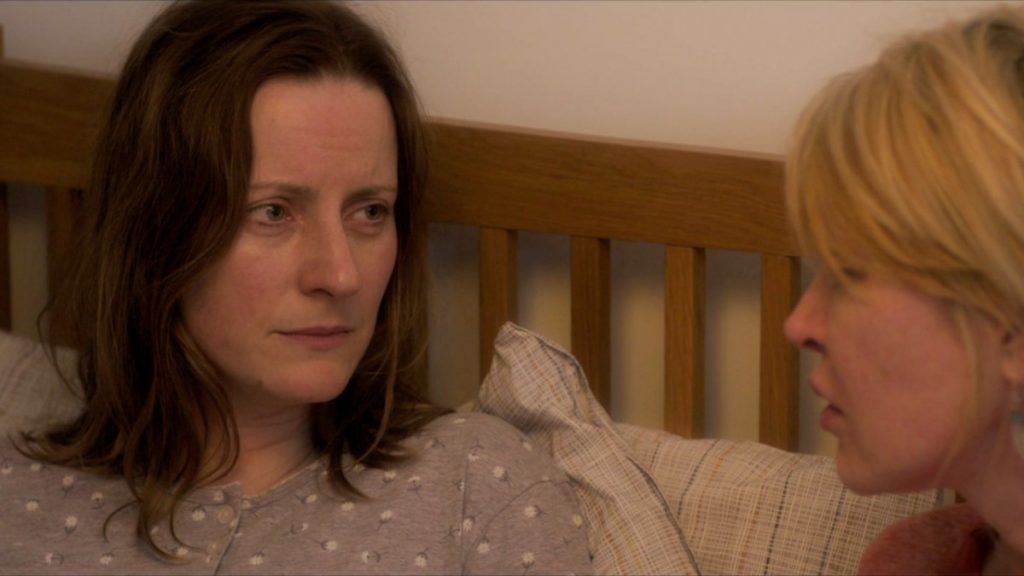 Sally is starting to get annoyed with Emma and responds to her in a similar way she did with David, by very awkwardly avoiding situations and making up excuses like “I’m just really tired” or “I’ve got a lot on at work at the moment.” Emma, who has never taken life very seriously, doesn’t really understand the concept of going to work or being on time for things, unlike Sally who has just received a promotion and has certain responsibilities she needs to uphold. Such differences in lifestyle result in Emma trying to instigate spontaneous morning sex in the kitchen which makes an uninterested Sally very late to work. The deranged nature of Emma leads her to believe that saying “you taste like the sea” is a compliment and kicking Sally in response to being pushed away are both entirely appropriate actions. It is clear as day that Emma has some pretty serious issues and Sally just doesn’t have time for that right now. 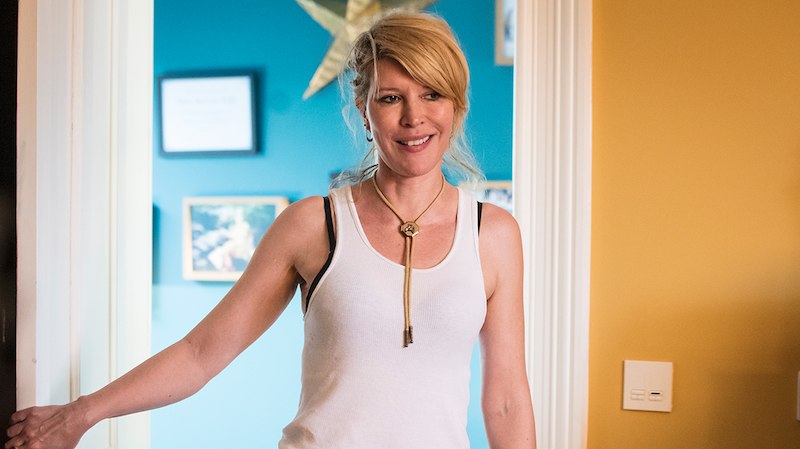 However, despite some brilliant scenes at the office with Eleanor (Felicity Montagu) and Mick (Steve Oram) who delivers one of the most brilliant lines of the show so far when asked if he’d ever fancied children (in the context of having children of his own) he responds with “if I did, it’s not something I’d admit to.”  Such an innocent question turned into something utterly disgusting, which is this show through and through, really. The essence of this episode was the dinner party with two of Sally’s friends, Kate (Robin Weaver) and Dan (Seb Cardinal). Emma learns that Dan is a film director and pushes her agenda onto him, using her promiscuous nature to suck in him, much as she did with Sally, into casting her in his most recent film. The behavior of both Dan and Emma during the dinner party is so brilliantly orchestrated, while utterly inappropriate it is entirely realistic and I myself have found myself at social events that have descended into something similar. While Sally and Kate, a breastfeeding mother of two, saw the evening as just a casual dinner between friends, so they can get to know Emma a bit better, they have their evening thwarted by the intentions of Emma, who turns it into a night of unnecessary debauchery. Emma is a nightmare for a dinner guest. She is gluten free but doesn’t like gluten-free foods, she wants to put her own music on and she tries her very best to put Kate down at every turn with unkind, backhanded comments intended only to make herself look like the more appealing woman to Dan. As the evening progresses, Dan and Emma do some drugs, drink too much wine and get the guitar out (classic dinner party move) and turn the civilized dinner party into a drink and drug-fueled jam session. It’s a classic case of people who think they are the life of the party but are actually just arseholes.

There are a couple of brilliant examples of British politeness in this episode. If there is anything Brits are known for it’s for being too polite and not calling people out on their bullshit. Emma suggests that she and Sally go to couples therapy and during their session mentions that she wants Sally to be a bit more sexually adventurous. When asked for specifics, she goes into detail about how she wants to experiment with “nose fucking in the anus” which Sally wasn’t in to, unsurprisingly. Sally said she found the whole thing quite frightening and Emma mentions that Sally was so frightened she ended up farting during it. The beauty of this conversation is that they are talking about something extremely vulgar and horrifying, this situation that Sally found herself in was truly awful for her and it is being laid bare for this therapist in an environment where Emma can basically get away with saying whatever she likes. While any normal person would probably construe this encounter as nothing short of sexual assault, especially as Emma admits that she basically forced Sally to stick her nose up her bum, the therapist doesn’t call her out or mention just how inappropriate and dangerously close to an assault this encounter was. It seems like Emma is able to charm almost anyone into agreeing with her or doing what she wants. Although Sally is beginning to see the light. Similarly during the dinner party Emma’s deranged attempts to impress Dan lead her to tell an absolute whopper of a lie. She tells them that Stanley Kubrick was her father and that Stanley Kubrick had a brother who was locked in the basement and weighed 40 stone and had extra limbs. Dan is a film director and knows better than anyone just how much of a lie this is, but for some reason, he goes along with it. Either he doesn’t know his craft at all or he is just being typical Brit and rather than calling someone out on their bullshit, convincing himself that they must be telling the truth because we like to assume the best of people…or we are just too afraid to be confrontational. 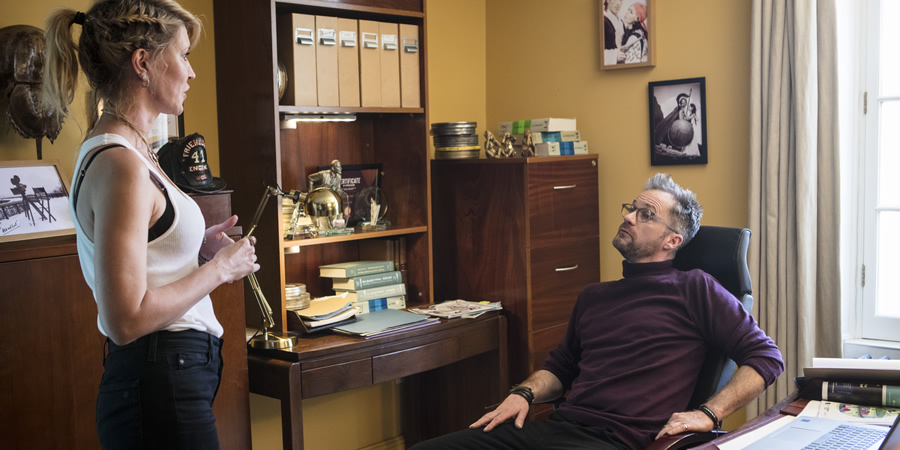 The dialogue of this episode is so superbly written that one can only assume Julia Davis has actually had these kinds of conversations before. Emma is using every weapon in her arsenal to make Dan like her and this kind of depravity and desperation can only come from someone who is deeply disturbed. At the moment we are only seeing the Emma she wants us to see but we have been shown glimpses of what is to come. Sally, who threw away everything to be with Emma, admitted to Kate that there are parts of Emma that she really, really doesn’t like and the more their relationship develops the less compatible they seem to be. However, Emma has sunk her teeth deep into Sally’s boring neck and it doesn’t look like she is going to be releasing her without a fight.

Now, a look at what is ahead on Sally4Ever.