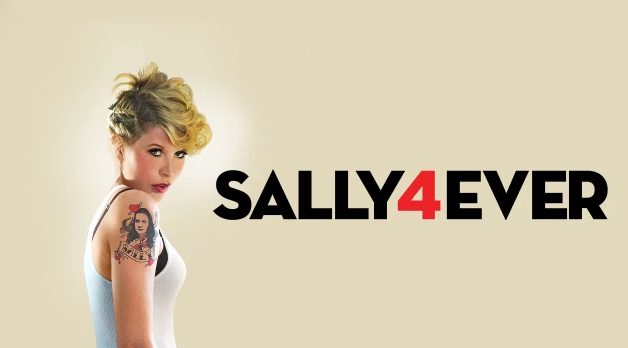 The final episode of Sally4Ever doesn’t fail to disappoint, bringing a barrage of ridiculous toilet humor, wildly inappropriate doctors and none other than Sean Bean himself as we see Sally and Emma escape to Scotland for their honeymoon. While an unfortunate bout of food poisoning puts a dampener on things romantically, the episode doesn’t fail to raise many a wry smile as we finally see Sally and Emma get the ending they deserve.

Upon arriving at a hotel that Sally worryingly claims costs £17’000 a night, Emma instantly gets on at her for fretting about money because they are in love and on their honeymoon and money simply doesn’t matter anymore. Attempting to get their money’s worth, they go to the seafood buffet where Emma piles up shellfish and devours each little morsel while Sally looks on disgusted. After dinner, Emma, who is a constant source of embarrassment to Sally, retires to a lounge room where she takes over the microphone and serenades Sally and her ‘dowdy shrine’ in a scene that will have you watching through your fingers. Later that night, Emma is struck by some absolutely horrendous food poisoning which gives Sally something of a ‘get out of jail free card’ and while Emma is quite literally throwing her guts up, she gets to go and enjoy her honeymoon which involves horse riding with Sean Bean – how civilized! Sally and Emma lock horns more than once on their honeymoon and Emma steals Sally’s phone to intercept messages from Nigel, knowing full well that their relationship is a massive threat to her. The honeymoon ends with Emma telling Sean Bean that she is actually 69 years old when she learns that the woman Sean is holidaying with is not his elderly mother but in fact his new wife. Sally ends up getting sick too but it’s not the fish that’s turning her stomach…it’s something else entirely. 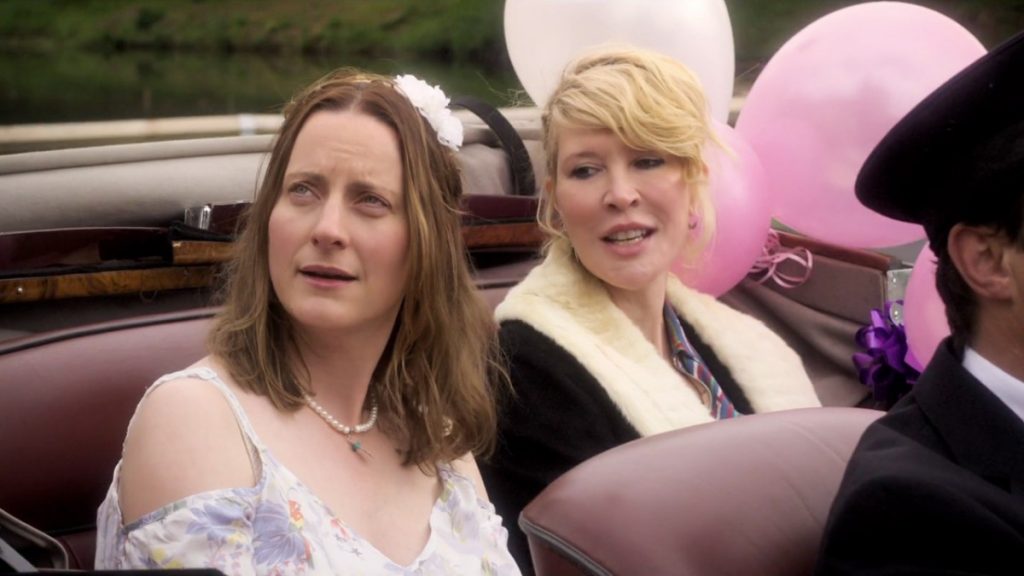 As far as final episodes go, this not only wraps up everything really nicely, providing a satisfying end for all major characters but it also leaves it open for a potential second season. Even Eleanor and David get a happy ending as they wind up having bizarre sex in a car listening to Enya following an erotic Puss in Boots-themed photo shoot. She’s remarkably flexible for a woman in a wheelchair. Despite the absurd ridiculousness of the whole series, this show has done something really brilliant in depicting a woman approaching middle age having a crisis. Sally is not the most enigmatic person in the world, in fact, there is very little of her personality that shines through at all. She is someone who has been raised by stiff upper lip parents who rather than face problems head-on, bury their hand in the sand and slap on a brave face. Sally had been doing this for years with David until she hit a breaking point and made an unknowingly bad decision. That’s the thing when you act on impulse, you don’t know what the repercussions are going to be and for Sally, the woman she decided to have a fling with turned out to be a psychopath. Who knew? Sally was attracted to Emma because she was everything she wanted to be, she was attracted to the idea of Emma, a fling with another woman doesn’t feel as much like cheating maybe? Having this kind of crisis led her down a very strange path which would test the sanity of anyone but she blindly followed it because she didn’t know what else to do. The only comfort and constant source of normality was Nigel which is who she probably should have been with anyway and cut out the whole psychopathic lesbian bit. This journey of self-discovery is essential for anyone and if you have grown up in a repressive household, chances are you will do this later in life or rebel as a teenager. 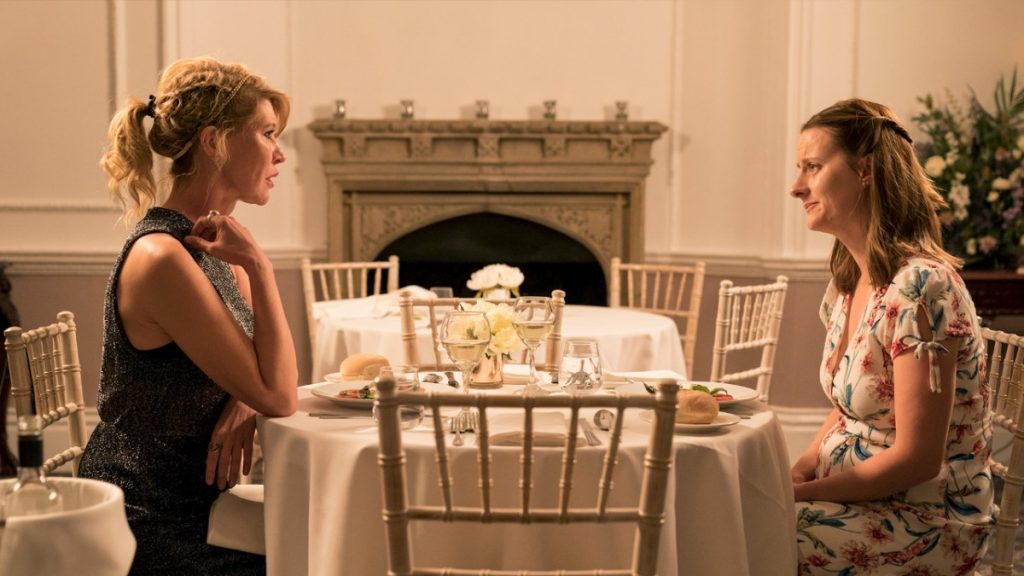 Should a woman show any signs of having a crisis like this people are quick to blame their hormones or even the menopause when in actual fact it is likely the crisis has been brought on by life pressures that affect everyone which is only exacerbated by societal pressures of being a woman. You can’t possibly be seen as having a little wobble because someone will accuse you of being crazy or chemically imbalanced. A woman having a mid-life crisis is an undesirable thing, but a man having one is almost inevitable and accepted. The therapist reflects this even further, rather than realistically portraying a woman in therapy, Julia Davis takes things one step further and instead shows us an unsympathetic view at how impossible it is for women to have a problem without someone telling them exactly what their problem is, in order to fit expectation. In fact, it became clear to me only a couple of weeks ago that these scenes in the therapist’s office are merely an extension of Julia Davies and Vicki Pepperdine’s podcast Joan and Jericha where they play two agony aunts providing nonsensical advice to nonsensical problems.

Emma, while a totally unlikeable person was an absolute joy to watch. It beggars belief that there are people out there like Emma but I am almost certain there is. She embodies the very worst qualities of humans; jealousy, manipulation, selfishness, narcissism, sadism. The only person she cares about is herself and she will chew you up and spit you out if it means getting what she wants. One question on my mind for the whole series was why Sally? Out of all the women who Emma so clearly can have, why did she fixate so much on Sally? Was it the security that Sally could bring her? Was it the potential for drama? Or was she genuinely in love with her? Emma belongs in a horror movie and the final scene of this episode only further confirms that. The next season, if there is one, could have a psychological horror/thriller element to it and I’m convinced that Emma would be one of the most terrifying villains on TV. 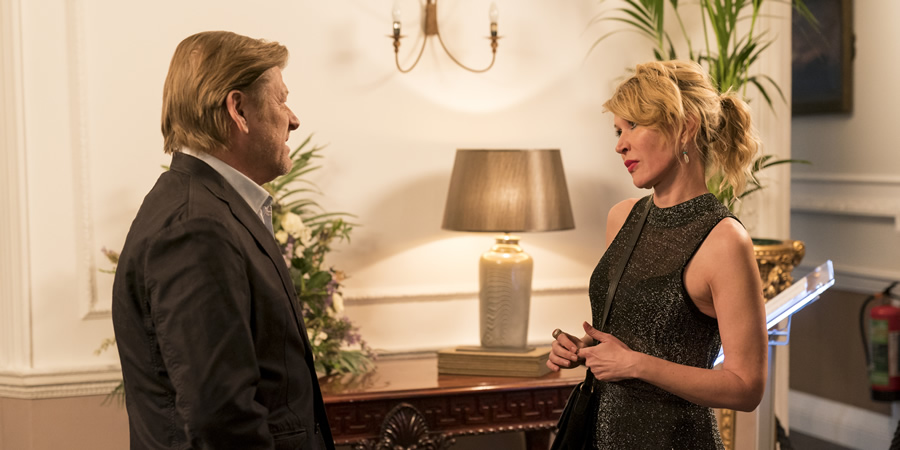 In an interview with The Guardian, Davies admitted that she was worried that there may be some backlash to Sally4Ever as the content is not for the faint-hearted and could be misinterpreted by more sensitive viewers. She also discussed at length at how her comedy was a release following the death of her parents, its where she channeled her grief and the end result was her filthy podcast Joan and Jericha and Sally4Ever. Neither take themselves very seriously and while they may appear to tackle real-life issues, underneath it all is some good old fashion cartoonistic humor, verging on the slapstick and very much in the realm of ridiculous. As our world appears to be nearing closer to the self-destruct button, it is important to remember to laugh and find that bit of escapism, something that distracts you from the latest political blunder or assault allegation and just takes you somewhere else, where its okay to laugh at poop and farts and vomit containing tentacles. Julia Davies welcomes you into her world with open arms and clasps them tightly around you so you can’t breathe and can’t escape. You might as well just submit and enjoy yourself.