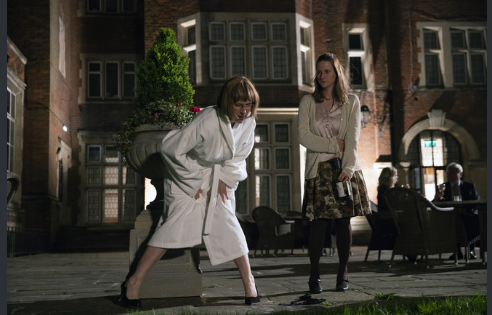 After dramatic actions from Emma (Julia Davis) last week and a new engagement, Sally (Catherine Shepherd) is able this week to take a relaxing work trip. Well, relaxing…not so much. In reality, apparently, as soon as everyone gets the tiniest bit on holiday they go bonkers. Sally just can’t seem to get a break.

Starting already with the stress of dealing with Emma who is bedridden and dramatic, Sally could certainly use a weekend away for work stuff. But she has to face Nigel (Julian Barratt) and while she can’t deny her interest in him, she doesn’t want to cheat again and cause Emma any more pain. A mishap causes a room problem and Sally ends up bunking with her boss Deborah (Jane Stanness) who has her own feelings for Sally. In fact, Deb gets quite tipsy after admittedly being an alcoholic and gets handsy. Poor Sally is trying to keep her from doing too much but, have you ever tried to take care of an extremely drunk person? I once had to hide all the scissors because a friend wanted to drunkenly cut her hair. That’s not easy. And Deborah takes it a whole other level by pinning Sally down and trying to force her to engage in sexual acts. I really hope Sally quits. Or files a sexual harassment lawsuit.

Meanwhile, Nigel is off getting drunk and trying to hit it off with the bartender. Hard to do when you can’t seem to remember her name and keep talking about the woman you’re really in love with but who is engaged to a woman but also possibly carrying your child…Well after Sally manages to wrestle Deborah off her, she does run to Nigel’s room for comfort. Because in reality, she’s incredibly unhappy with Emma. I mean, duh. The girl kicked you in the shins when you tried to leave for work. You gotta get out of that, girl. Well, turns out Nigel is more of a drunk smooth-talker than we realized. 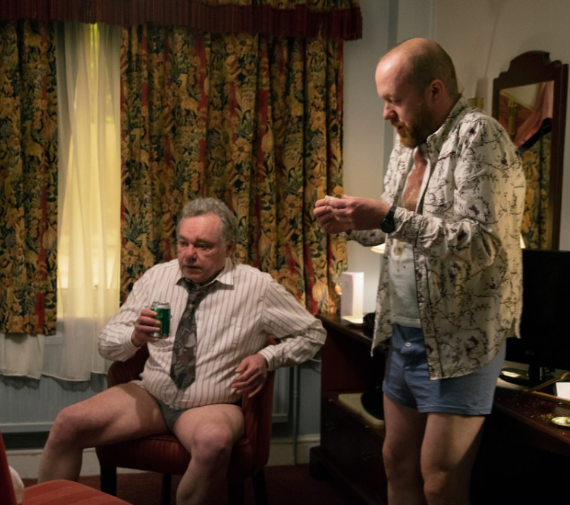 And while all the drama of Sally and Nigel and Deborah is going on, Mick (Steve Oram) and Eleanor (Felicity Monagu) are off having their own shenanigans. Casually making out or taping up a smoke detector and getting high in the room which sets off a smoke alarm. Somehow, I feel like I always knew the truth about Eleanor. But it was hilarious seeing it play out the way it did.

I’m concerned about Sally’s future. Because Emma’s not good for her. She’s not happy. She’s not going to be happy by going after what she wants in life tethered to someone who causes her unpleasantness. Even from a relationship perspective, after catching her having someone shit in her mouth while they ejaculate so she can get a movie role, I’d move on. And Sal, I think you really need to. There’s been no confirmation on another season, so perhaps next episode will be all we have left. Do you think Emma and Sally will make it the long haul? Marriage and a baby? Or will Sally end up with Nigel? Or alone, which frankly seems like the best option. Comment below! And tune in for the finale of Sally4Ever on Sunday, December 6th at 10:00 PM.