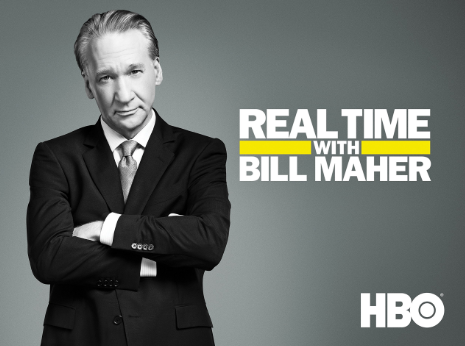 Bill Maher and his Friday night show REAL TIME WITH BILL MAHER just hit a milestone. In the depth of its 17th season, the show just aired its 500th episode. It happened Friday night June 21 at 10:00pm with guests historian Allan Lichtman as the top-of-show interview, columnist Dr. Debra Soh as the mid-show interview and at the roundtable, journalist Thom Hartmann, political consultant Liz Mair and columnist Dan Savage all in attendance. Wow, 500 times at the set is a lot of New Rules, political chat and controversial slams at the political & social scene. Here is a clip.

In light of the achievement, Bill Maher talked with Variety about the milestone and other thoughts that we’ll share.

Variety: Anniversaries can be arbitrary, but what does 500 episodes of “Real Time” mean to you and the show?

Bill Maher: It’s my life just going way too quickly. I feel like I just began, so I don’t know how we got to 500. I guess that there is a niche that I’ve been filling. My theory on show business is always do something no one else is doing. Don’t try to do something that other people are doing and don’t put out a jazz album if you’re a rock band, don’t do a serious dark drama if you’re the funny guy. Do what they want. It’s not that complicated, show business.

V: Any standout moments from the 500 episodes that come to mind? 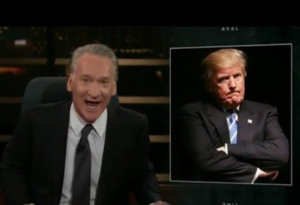 BM: I would say what I did on my 60th birthday. I don’t usually talk about my personal life, and I thought, “Well, I’m 60, I got to make something out of this.” I put out a petition for Obama to come on the show, which eventually worked. He had done every show, it was near the end of his term, and I was like why not us? I’ve been pretty damn supportive, and I get it that we are a much more dangerous show. Anything could happen, anything could be said, and that’s why politicians, a lot of them, stay away. It is risky. But considering that I gave him a million dollars, that’s a pretty big show of support.

I treat the audience as if they are my real friend that never got married and never had kids, and I said, “This is the relationship of my life, me and the audience. Do this one thing for me, get Obama to come on.” That was a real meaningful moment for me.

V: You often say you wish you didn’t have to constantly talk about Trump, but he takes up all the oxygen these days. How difficult is it not to talk about him and everything going on?

BM: It’s the question that’s on my mind every week doing this show. I think I have a bonding with so many people in America now because we find ourselves in the same place, which is you don’t want to ignore it because that would mean you’re a bad citizen. You can’t just let it happen. You have to try your best to pay some attention because you can’t let it become normal.

But on the other hand, you can’t watch it all the time or else you go crazy. The more you see something, the more normal it becomes, and you can’t let it become normalized. So you’re caught in this terrible middle ground. I don’t have a great answer for that. All I know is if he wins a second term, I don’t know what I’m going to do… I feel exhausted by this man and by working so hard every week to try to find some new angle. The prospect of another four years of having to do it looms over me like the sword of Damocles. I cannot tell you how much anxiety that causes me.

V: You have new bosses with WarnerMedia, AT&T. Has anything changed? Are they keeping a little more tabs on you? What’s going on with your new corporate bosses?

BM: It’s all very new. I have no idea what they think of this show. I talked to our new head of entertainment, Bob Greenblatt, he seems like a great guy, but he’s done this before. He’s not new to this. He’s just somebody AT&T brought in. So that seems like it’s going to be a nice relationship, but I’ll never have a better boss than Richard Plepler. He was a news junkie, so he loved a show like this. 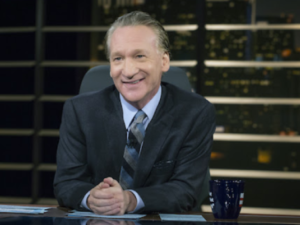 And HBO’s model has always been if they like you and believe in you, they leave you alone and that’s why HBO has always turned out such amazing programming and got the best people to come on-board. But it’s always been a boutique network, and I understand the thinking, I’m just guessing here, of the new corporate overlords that in this new atmosphere we’re in with streaming networks like Netflix and Hulu and Amazon, that have a great deal of content, that it’s going to be harder and harder to survive if you only have six shows on at a time.

I am assuming they’re going to probably want more content. I’m hoping that’s good for me. I’m hoping that they’ll leave me alone and just want more. And that if you want more, then you don’t want to start getting rid of people. But I have no idea and if we never talk and we can just continue to do this, that would be fine with me. I certainly have nothing bad to say, I just don’t have anything to say because I don’t know.

Well, we know that REAL TIME WITH BILL MAHER is renewed through 2020 and look forward to his rants & chats Friday nights at 10:00pm. Are you still watching REAL TIME?