If you were looking for Bill Maher and his latest scheduled guests, they didn’t appear Friday night at 10:00pm as they should. And why the hell not, you ask? Well, because Bill Maher tested positive for COVID-19. Oh, yay (stated sarcastically)! 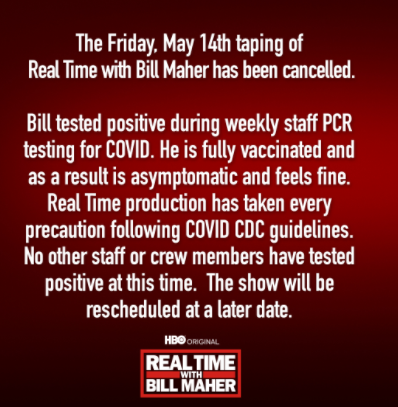 REAL TIME WITH BILL MAHER, which is in its 19th season on HBO, was the first major show to bring back a small live audience in September after a Covid break and a number of episodes filmed in Maher’s backyard. Since its return to the studio, with mostly paid staff likely filling the seats (he has said as much on-air) the show has seen strict protocols with everyone getting testing prior to showtime. This time around, the host himself was caught with a positive test for the virus. Following protocol then, they canceled the taping of installment #565 to ensure safety for all and the health of Mr. Maher. As stated, he was asymptomatic meaning he was ‘feeling fine.’

The guests to wax upon the hot topics of the day were to be astrophysicist and StarTalk podcaster Neil deGrasse Tyson as the top-of-show interview guest, and World War Z author Max Brooks and Hardcore History podcast host Dan Carlin as panelists. It has been stated that the show will be rescheduled. Whether that means immediately next week or elsewhen is uncertain. Maher did tweet a comment upon the announcement of the halt: 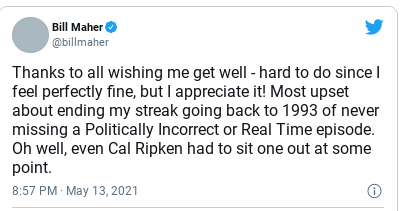 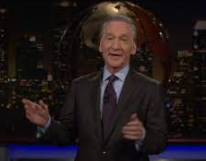 Now the normal protocol has also been, I know, to quarantine a positively tested person for two weeks to again ensure and monitor their health and not transmit the virus to others. Even though we are on the backside of the pandemic doesn’t mean there are still not serious cases. Even though Bill Maher ‘feels perfectly fine’ will they sit him out for another taping yet before he returns to duty? I guess we will have to wait to see about that.

One last note on the matter. I found it funny that people were missing the facts of this li’l bit of news. As I researched the story, I glanced at comment sections and they all had responses that stated that the entire show was immediately canceled not just the 05.14 installment. Some were happy he was ousted and others wished him well. Well, Maher is not going anywhere soon, at least, through his 20th season. His contract goes until then. REAL TIME WITH BILL MAHER will return soon.