Okay, so with the Holidays hitting I got behind on this little special but I appreciate Mel Brooks as much as HBO seems too and gave it a look.

Mel Broks movies pop up on HBO’s channels all the time and a number of specials by him have appeared as well. This actually makes his fourth one. There was MEL BROOKS AND DICK CAVETT TOGETHER AGAIN in 2011, MEL BROOKS STRIKES BACK in 2015, and MEL BROOKS AT THE GEFFEN  and IF YOU’RE NOT IN THE OBIT, EAT BREAKFAST before this one. This time around is a completely different take but still very much Mel. MEL BROOKS: UNWRAPPED features the award-winning actor, writer, producer and director in interviews past and present with Alan Yentob, former creative director for the BBC. Combining archival material with present-day interviews and verite footage of Brooks, the show is filled with the venerated comedian’s hilarious anecdotes about his life and illustrious career.

I almost can’t decide what is the best part of this special. It is always interesting to see him work his craft. There are not that many film clips, Young Frankenstein & High Anxiety get some, and that is alright because the best doses of Brooks humor come through when he himself goes off on a routine whether it is in front of Yentob’s camera or from a taped talk show interview. Off he goes and you got to chuckle. Those are great moments to watch but so is 93-year-old Brooks reminiscing about it all. He does plenty of it and even 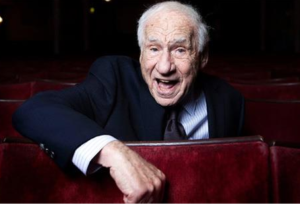 drops by friend Carl Reiner’s home for a visit. He still has it at this advanced age and, quite honestly, it is a delight to see. The schtick balances the verite moments perfectly and we get not only Mel Brooks unwrapped but also a bit of Melvin Kominsky (his birth name) as well.

If I had to grumble, I wish there was more from Melvin. There was more that could have been unwrapped but this piece proved the best of the lot. Seek out MEL BROOKS: UNWRAPPED across HBO’s streaming sites. Thank you, Alan Yentob and Mel Brooks!