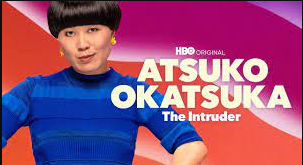 Well, a new year has rolled around and I confess that I did not spend my New Year’s Eve watching the Lizzo concert. I did eventually see the opening number on HBO Max a day or so later; just long enough to determine after her first number that her style of music was not for me. Oh, I can respect her message and her body positivity alright but that was it. Instead, I waited until Dec. 31 to watch ATSUKO OKATSUKA: THE INTRUDER. Yes, I know, it premieres back on 12.10.22 but I was busy then and yes, I know we are on the tail end of January 2023 already (that’s how far behind I am) but I needed to talk about this HBO Comedy Special.

It was just a breath of fresh air as I awaited the countdown to the new year. I never heard of this comedian though she has been around for a few years. She has a number of podcasts and did a Quibi thing but this special is her first solo HBO standup gig. The New York Times named it Best Debut of 2022 and Vulture listed it as one of the Best Comedy Specials of 2022. Before we take a closer look at the THE INTRUDER gig, I need to point out one more thing about her that is kind of cool. She performed a stand-up set during an earthquake at The Ice House comedy club in Pasadena, California, in 2019 which went viral. She was commended for keeping the audience calm and serving quick-witted jokes while the earthquake went on. She simply kept it going and commanded that space and that crowd.

She clearly commanded it during the HBO stint too and it was a delight to watch. As a press release described it – She brought her brand of ingenious, offbeat storytelling to the Elsewhere stage in Brooklyn, New York where she dished on the futile art of impressing teenagers, attending a “Magic Mike Live” show with her grandmother, and the alarming reactions that she and her husband had to the unwanted presence of an intruder. 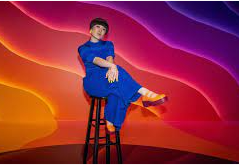 To be honest, the unknown intruder was not in the bedroom or even in the house at all, but in their yard. But how she weaved the story throughout her set was smart. She didn’t hit you in the middle of her hour with the tale of the intruder, but she’d come around back to it after she went off on a witty tangent four or five different times. An odd incident for her and her husband Ryan for sure, but the way she got around to telling it was just pure and cool. Add an infectious laugh and bouncy movement just added to it all.

She was the first comedian in a while that wasn’t doing the stand-up for therapeutic reasons. In fact, her mental health hardly factored in at all. Oh, she did spend a smidgen of time talking about her schizophrenic mother though. Atsuko was just was out there just to introduce herself and state her upbringing (Taiwanese/Japanese; moved to U. S. with grandma undocumented at age 10) and tell of her crazy encounter with an intruder in the yard. I wish I could do justice to her comedic style here but it is best to just show the trailer.

Another cool thing about her routine or more specifically I guess, her personality was the interaction she was able to draw from her audience. She literally reached out to them and they responded and she took their responses and deftly ran with them and worked them into something funny. Some others do this also, we know it as improv, but she did it so effortlessly. One more cool thing, which I never heard of, but she created the #dropchallenge which was a bit of a thing in 2022. Look it up if you need to, I did. And while you’re at it, here is a good Hollywood Reporter interview too.

So, if you are a fan of stand-up comedy in the slightest you need to watch ATSUKO OKATSUKA: THE INTRUDER now streaming on HBO Max. It is a fun way to kick off 2023.