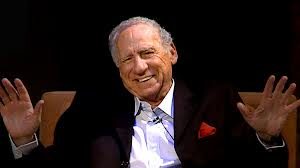 Overview: Appearing onstage with Alan Yentob, creative director for the BBC, at the Geffen Theater in Westwood, Cal. before a live audience, Mel Brooks reviews his career as a writer, director, actor, producer, composer, failed ballet dancer and comedian. The special looks at the Brooklyn native’s early life, show-business influences, early career and ascension as one of Hollywood’s most successful writers and directors. The special also offers clips from some of his classic movies and TV work, including “Your Show of Shows,” featuring Sid Caesar and Carl Reiner, one of Brooks and Reiner’s “2000 Year Old Man” routines and the movies “The Producers,” “Blazing Saddles” and “High Anxiety.”

Expectations: That’s simple – to be amused. This special presentation on HBO is just supposed to let a gifted entertainer toot his own horn and make us laugh in the process. It should do that easily; the guy can spin a story. Even the younger generations should enjoy. 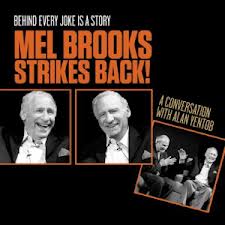 Gut Reaction: I guess Mr. Brooks’ last stint on HBO wasn’t through enough; neither is this one but it is more of the same funny banter. The previous one, MEL BROOKS AND DICK CAVETT TOGETHER AGAIN cashed in on the friendship and talents of those two entertainers all the way to an Emmy nomination. MEL BROOKS STRIKES BACK marks his second appearance. What’s next, an HBO FILM biography? What does Mel Brooks need this special for anyway? He is a multi-EGOT, for crying out loud. Oh, that means he has Emmy, Grammy, Oscar and Tony Awards. He is that talented.

Besides all that, he is just a good storyteller. I thought the way it started that we were going to get a solid chronological recap of his life to date as it starts with a story about his mother’s arrival in the U. S followed by his youth and his first job. After that, however, the stories of film making, though interesting, just lost all sense of format. It was more free-wheeling, which I guess fits Mel Brooks’ style of storytelling. I just wished the hour was formatted a bit differently.

In Conclusion: For those who are old enough to know Mel Brooks’ work and style this should be a fast delight. For those of younger generations, if they bother to watch, it is a glimpse of his genius that might intrigue some to check out his oeuvre. Just think he must have hundreds of stories to tell and maybe he’ll dole them out one HBO Special Presentation at a time.

I’ll leave you with a clip. You can leave a comment. Enjoy Mel!