So, what am I thinking about Lil Rel Howery and his second HBO comedy special? Well, he dished out a full hour for his people and they appreciated it. Truthfully, I was just kind of okay with it. I really don’t have strong pluses or minuses for it but a good dose of observations that are neither here nor there. I guess as a way to review I need to go through all that. So, here are my thoughts on HBO Comedy Special: LIL REL HOWERY: I SAID IT. Y’ALL THINKING IT. 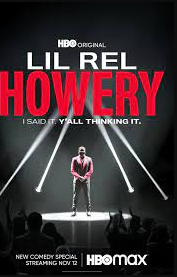 Observation # 1 – He talks to his people. And clearly, there is no harm or foul in that. This special was taped earlier this year at the Chicago Theater in his hometown of Chicago and it all worked out great for him there. His style is very black, and his speech pattern, references, and lingo were for his community. Some of it was lost on me, but I’m a white guy so that’s no fault on him. For example, he did a great little bit on Bone-Thugs-n-Harmony which was amusing but lost on me. I don’t know the artists or their music just how to spell the act’s name properly; though a little bit about Al Sharpton did nothing for me. My point is that it just wasn’t 100% relevant to me. In contrast, Yvonne Orji has a special, and this white guy got the whole message from beginning to end from this black lady of Nigerian descent. Again, I’m not painting Howery badly here; it’s just an observation.

Observation # 2 – He is his own best audience. One big takeaway is that this man is happy. He professes it a few times within his hour that he is happy in his life. And I noted that he sure as hell laughs at his own jokes. And his little laughs are kind of funny in themselves. Of course, there is no problem with him having a good time up on that stage. But it got to the point where I was waiting for his chuckle to interject. Do these bursts give him pause to think of what is to come next? Are these honest reactions that he just surprised himself with a bit of off-scripted banter that worked to the audience’s bemusement? I don’t know, but the joy of his feel-good chuckles is infectious. You are supposed to look like you are having a good time up there, right? And he has a good time.

Observation # 3 – He has questionable focus. It works for him more than against him and makes you wonder just if his mind is like that all the time. The positive side of it makes him the good comedian he is. He does have set jokes he wants to get across like his talk of therapy, his talk of parenting, and how messed up the world is today, but then a shout-out from the audience or a slight deviation from his point can send him on a different focus altogether and when it works it is interesting to see where it goes. One such instance was the off-tangent bit about the movie Lean On Me. It wasn’t planned, but he launches into 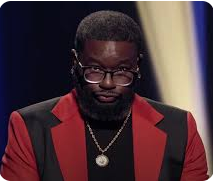 scenes from the movie, in character, to the amazement of everyone. It ends with an impromptu singing of the title song by all. Like I say, when it works, it works. To the negative though, were moments like fidgeting with his stool. Use the prop if you want to, but just moving it around and talking to it as opposed to focusing on the audience is a head-scratcher. Yeah, no problem with my focus, I notice everything.

Observation # 4 – I guess if I had a concise negative view, is that I didn’t like his show’s title. I know, a petty minor quibble. It led me to think, at any rate, that he was going to be the one to say out loud what the rest of us were only thinking. He was going to declare some unspoken truths about today’s society or something? Well, I sure wasn’t thinking anything about the resurgence of polio or therapy and definitely had no thoughts about Bone-Thugs-n-Harmony, Al Sharpton, or a Morgan Freeman movie. If you want to speak about what’s on our minds then more biting social satire would have been the angle, right?

Observation # 5 – He is humble. A simple fact, he comes across he is being most humble and appreciative. He kind of had an odd ending to his set when he just looked up after a small joke and paused, but didn’t chuckle, and finally said he was done. He wanted to spend his last moments on stage just taking it in. He silently stood there and did just that all to a standing ovation. He did alright by himself he was happy, he let his focus go and did some improv riffs that didn’t flop and he connected with his home turf.

So, it was a mixed bag for me. Didn’t love it or hate it. But it was interesting, now after two comedy stints for HBO, to finally get a better sense of how Howery’s mind leads him to comedic success. You see it playing out in LIL REL HOWERY: I SAID IT. Y’ALL THINKING IT now playing on HBO.