Overview: “Every morning before having breakfast, I pick up my newspaper, get the obituary section, and see if I’m listed,” says comedy legend Carl Reiner. “If I’m not, I’ll have my breakfast.” The 95-year-old wonders why some of his friends died years ago, while others are still thriving, asking, “Was it luck, genes, modern medicine or are we doing something right?”

In this heartwarming documentary, host Carl Reiner tracks down such celebrated nonagenarians and centenarians as Mel Brooks, 90, Dick Van Dyke, 91, Kirk Douglas, 100, Norman Lear, 94, and Betty White, 95, who show that the later years can truly be the happiest and most rewarding. 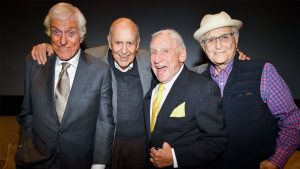 Expectations: I don’t know why but before even watching this documentary I’ve got a mixed opinion about it. On one hand you have a positive outlook on the elder generation being presented. What’s wrong with that, right? But, on the other hand I see mostly, rich entertainers with enough money for the best doctors and care, living cushy lives. There does seem to be a few others, meaning non-entertainers, in the piece, but still the main players here rub me the wrong way. More on that thought below, but for now, here is the trailer.

Gut Reaction: I think I just needed to get past the notion that this documentary featured noted, privileged, rich entertainers. I need to accept that it was meant to be a positive spin on the elder generation in America. There could have been a totally different story about neglected senior citizen and the whole issue with elder care, but that is just not what this film is about. It is meant to be about the “golden years” you can achieve if you have the right mental attitude, and the good health and energy to carry it off. But, most of America doesn’t. This just looks at the 1% if you will and that is what rubbed me wrong. I could round and round on that but that is not the type of story presented, so let’s just stick to that.

There is quite a bit of inspiration to be taken from this and it starts with a positive attitude. Yes, it is easier perhaps for a charismatic, vibrant person like the entertainers presented, but there are others here that share that trait. There is Harriette Thompson, 93, the oldest woman to run and finish a marathon, Ida Keeling, 101, a track and field athlete, who works out for an hour every day, 98-year-old yoga teacher, Tao Porchon-Lynch, who marched with Gandhi and recently took up tango, and Jim “Pee Wee” Martin, 95, who fought in D-Day and still parachutes. They get up and push themselves to do what they can do to enrich their lives within the confines of their limitations. And when you can’t do any more, you take a break because there is always tomorrow. If you are fortunate enough to have genetics on your side then you may push a bit further than someone else – but regardless of who you are live the life given to the best of your ability. There is no harm in it no matter at what degree of ability you can put into it. Good advice that you can’t argue with.

The wit and vitality of these folks doesn’t hurt to sweeten the notion. I’m not sure why Jerry Seinfeld needs to be in there though and the song & dance is just fluff. But, the comedic wit is genius.

HBO: How did you become involved in this production?

Danny Gold: [Executive Producer] Aimee Hyatt and [Producer] George Shapiro had decided to move forward with George’s passion project regarding people living well after 90. They watched my movie 100 Voices: A Journey Home and they liked it. We met about this project and they offered me the directing job, which led to me co-writing and producing with them as well. 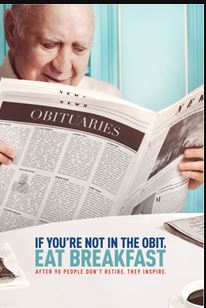 HBO: Why did you decide to have Carl Reiner conduct some of the interviews?

Danny Gold: Carl has a natural curiosity and he’s great person to have a discussion with; that lent itself nicely to having him speak with Betty White, Kirk Douglas, Mel Brooks, Norman Lear and Dick Van Dyke. It was more of a discussion than an interview. The film really evolved into a combination of discussions, inspirational stories, comedy and music.

HBO: Did you learn anything from speaking with the subjects in the film?

Danny Gold: I think all these people have so much wisdom to share. We did interviews with people from all different walks of life, but I think there’s a similarity between all of them. They all have a passion for something and wake up in the morning with a purpose, have friends and enjoy laughter. Those are all ingredients to living past 90. I look at the movie as a valentine to all those living after 90, and something inspirational for the rest of us. I want people to feel like they have a lot to look forward to in life.

HBO: How did you get involved in this film?

George Shapiro: If You’re Not in the Obit, Eat Breakfast is one of my favorite things I’ve done. I’m at Carl’s house a lot; he and Mel Brooks are there every night having fun. Carl is so amazing and he’s 95. He just writes one book after another, and he does all these guest appearances. He wrote Carl Reiner, Now You’re Ninety Four, which has all these stretching exercises in it, and while heading to Conan O’Brien’s show he fell down the stairs at his house. He went on the show, opened his book, and showed the leg exercises to prove he was supple enough to fall down the stairs and not get hurt. He really motivated me. Watching Carl, Mel and Norman Lear — I was collecting things in my “file.” [Executive Producer] Aimee Hyatt kept encouraging me to pull out the files and put it into production.

HBO: What do you hope audiences take away from watching this film?

George Shapiro: I think there’s a misconception about old age. Look at this film for inspiration that you can have a joyous, fun life when you’re between 90 and 105. You have to open your mind to it.

In Conclusion: As our life expectancy rises more & more people will be seeing the age of 90 and above. May the gods bless them and may we all be reminded of what this documentary espouses – keep going and make the best of it; try to make them “golden.” Now, where is the documentary about the other 99%?

Next: HBO has confirmed that THE DEFIANT ONES will debut SUNDAY, JULY 9 at 9:00 p.m. (ET/PT), with other new episodes debuting successive nights, July 10, 11 and 12, at the same time. We will review after all four installments have aired.