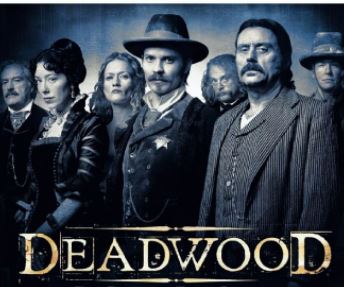 An official press release has stated the following –

Production has begun in Los Angeles on HBO Films: DEADWOOD movie, it was announced by Casey Bloys, president, HBO Programming. Continuing the story begun in David Milch’s critically acclaimed, Emmy-winning HBO series, the feature-length presentation is written by Milch, directed by Daniel Minahan and features original cast members from the series.
In the DEADWOOD film, the indelible characters of the series are reunited after ten years to celebrate South Dakota’s statehood. Former rivalries are reignited, alliances are tested and old wounds are reopened, as all are left to navigate the inevitable changes that modernity and time have wrought.

During its three-season, 36-episode run on HBO from 2004 to 2006, DEADWOOD was nominated for 28 Primetime Emmy Awards, winning eight, including Outstanding Directing for a Drama Series (Walter Hill), and also received a Golden Globe Award for Best Performer by an Actor in a Television Series – Drama (Ian McShane). 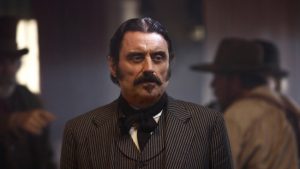 This certainly is one of the most interesting developments for HBO. I recall we were all pretty disappointed in the abrupt end of the series back in 2006. We also thought there would be “no cocksucker’s chance in all of Hell,” to use Swearengen’s vernacular, that the cast would align to make it happen. They did do just that, except for the deceased Powers Boothe, and now, under the pen of Milch (as it should be) and the direction of Minahan (episodic director for SIX FEET UNDER, DEADWOOD, BIG LOVE, JOHN FROM CINCINNATI, TRUE BLOOD, THE NEWSROOM and GAME OF THRONES) we will return to Deadwood, South Dakota once again; right when the territory is on the cusp of statehood. You can bet the locals will have something to ‘fuckin’ say about that, right Al?