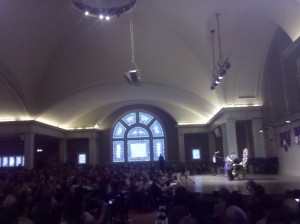 George R.R. Martin, author of the A Song of Ice and Fire series of which HBO’s Game of Thrones series is derived, touched down in Seattle, WA last night to address his ever growing readership.  The gathering took place at the Seattle Town Hall, an expansive building with stained glass panels towering above rows of what appear to be old church pews.  Mr Martin stepped onto the stage to a uproarious applause and standing ovation from much of the crowd.

Having worked in the television industry all of his life he said that no network is as much a pleasure to work with as HBO, who he says cares solely about the quality of their content. 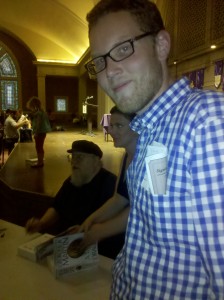 Because of the HBO series, he said, he’s enjoying watching millions of new readers take up the challenge of reading his lengthy tomes.  Mr Martin is very pleased with what HBO has done with his beloved series and looks forward to working with the network, showering praise on the premium cable channel.

The author also took questions from several fans, including one from a woman who thanked Martin for including characters she could relate to as a person with a disability as well as a woman, in his fantasy series.

Another fan took the microphone and asked why Mr Martin chose to include homosexual characters in his novels to which he responded (paraphrasing) “Well, I noticed there were gay people in the world [long pause as audience claps] so I thought I should put some in my world as well.”

When asked about his confrontation with Lost show-runner Damon Lindelof, Martin said that he had watched the show religiously and loved the production overall but that the ending simply needed to be… “better.” 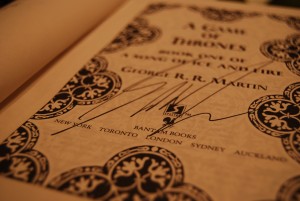 He also told fans of his “Wild Cards” series to “keep watching the skies” with regards to the possibility of an on screen adaptation of his other work.

After 30 or so minutes of Q and A with the crowd, George moved over to another table where over 1000 fans lined up to get their A Song of Ice and Fire books, comics and calenders signed by the legendary author.

While in Seattle he also visited the Microsoft owned, game company, Bungie as well as Amazon headquarters.  On his personal blog he hints at what went on behind those closed doors:

“Seattle also included visits to Bungie (I could tell you what they are doing, but then I’d have to kill you) and Amazon (where they are selling lots o’ books). Cool stuff, great people.”

Other than the absurdly long lines for the book signings, HBOWatch had a wonderful Friday evening with Mr. Martin in Downtown Seattle.  Come back soon, George!  Check out the full video below if we’ve left you wanting more!