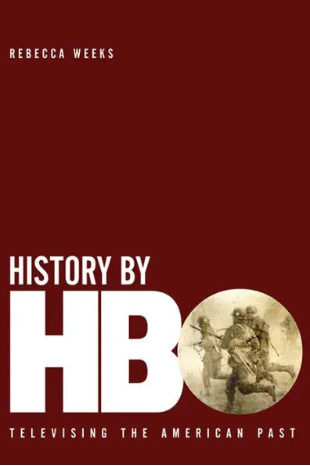 Earlier this year HBOWatch was given the opportunity to review a book about HBO. Now, at the time of HBO’s 50th Anniversary, we thought it a great time to share with you our thoughts about the work.

It is entitled “History by HBO: Televising the American Past” by Rebecca Weeks. A copy of the 186-page book came to us via The University Press of Kentucky. “History By HBO” sets out to outline how history is crafted on television and the diverse forms it can take. More specifically, how the premier pay network HBO worked with historical fact to flesh out four outstanding classic and award-winning series.

Readers must keep in mind that this is not an all-inclusive look on how HBO has treated all of its historical content. It focuses on four big title shows on the network because the author was able to research those titles in depth. The shows Weeks examines are DEADWOOD, BOARDWALK EMPIRE, TREME, and BAND OF BROTHERS. What is unfortunate then is that the behind-the-scenes treatment of such works as ROME, CHORNOBYL, and JOHN ADAMS, for example, are missed, but the in-depth look of the shows chosen makes the point quite strongly that HBO takes its period pieces quite seriously.

It is broken down this way:

After an Introduction, the first show examined for how it handled history was DEADWOOD. As our fans know this was a rough, gritty look at real historical characters in the remote frontier town of Deadwood, South Dakota. The series, by David Milch, presented three seasons (36 episodes) and a concluding TV movie. The approach Weeks scrutinizes here is the top-to-bottom authentic “look and

feel” (as she puts it) that the show used to achieve historical accuracy. She quickly spells out that DEADWOOD reaffirms HBO’s strategy which we have enjoyed. That is, sink the bucks into all the details but sacrifice the number of episodes. This western did that and Weeks spends time talking about how the production researched and recreated all the details, especially sets & costumes. Out of this whole book, this first chapter was the highlight for me.

I think the book leads off with Milch’s show for a reason, to illustrate for us how a show immerses in total historical accuracy because the next show examined doesn’t quite do that. That takes us to Terence Winters’ BOARDWALK EMPIRE. It is the period piece that took us to Atlantic City in the early 1900s for five seasons (56 episodes). Wait a minute, you say? Of course, it is a solid period piece, right? Is it? Though the series had all the trappings and dressings for a detailed period piece, this book’s author reminds us that it wasn’t all accurate, but it was neatly hidden in all the details. Weeks

points out that there were three types of characters in Winters’ Prohibition story; true personas like Al Capone (Stephen Graham), characters influenced by real persons, and total fictional characters. Jimmy Darmody (Michael Pitt) was a piece of fiction and our lead Enoch “Nucky” Thompson (Steve Buscemi) was a composite character largely based on the real person Nucky Johnson. Most shows employ this method it seems. The chapter interestingly goes on to say how it was necessary to manipulate the characters this way. It made sense why Winter did this and it makes sense how Weeks explains it.

That takes us to Chapter 3 which offers us the most recent period piece of the bunch and the unique problems it caused for its producing team. We focus on David Simon’s TREME. That show took us to the denizens of the Treme neighborhood of New Orleans in the aftermath of Hurricane Katrina. It did so for four seasons (36 episodes). The history played out here was almost in real-time. Issues with rebuilding the city were happening still as seasons of the series were looking at the topic. TREME would explore New Orleans culture including and beyond the music scene to encompass political corruption, the public housing controversy, the criminal justice system, clashes between police and Mardi Gras Indians, and the struggle to regain the tourism

industry after the storm. As Weeks points out, this series was able to look at the situation from angles and perspectives thus, enriching the historical accuracy of its telling from the big, demanding issues all the way down to the intimate, personal issues of the type of persons involved. Since Katrina was current history, literally just a few years prior to production, the plight of the region was quite vivid and even though the characters were fictional the scrutinized reality they were in was just recent memories. TREME proves a great example of historical storytelling and Weeks describes and documents it very well.

The HBO Miniseries BAND OF BROTHERS took up the last chapter. This Tom Hanks/Steven Spielberg television event dramatized the history of “Easy” Company, 2nd Battalion, 506th Parachute Infantry Regiment of the 101st Airborne Division, from jump training in the United States through its participation in major actions in Europe during WWII. It was the pinnacle of HBO excellence that ran for 10 gripping episodes. By now in the

book, we learn of all the tricks of the trade of pulling off the research & craftmanship it takes to shape an historical story. Weeks does not repeat herself here, as this miniseries used the same tactics as the other series cited but reveals yet another way of offering historical accuracy and that is via the use of sound. That’s right, out of all the details BAND OF BROTHERS utilized to submerse audiences to the realities of WWII warfare via this series, the use of sound doesn’t quickly come to mind. But Weeks serves multiple times strong examples of how sound manipulation, sound effects and soundtrack played a role in the accuracy of the times and conditions that the work places us in.

The work wraps up with a conclusion and sixty-some pages of footnotes and an index. It is academic work after all. The Notes can be ignored without hurting the overall context. In the end, it was an interesting read. It would be a bit dry for those totally not engaged I suppose. The book does take time to explain narrative structure, and TV’s experiments with that over time and how HBO help define how we watch TV, and the importance of solid story structure. In the last chapter, it even details the development of new sound technologies and other digital constructs that seem to take us away from the examination of BAND OF BROTHERS but if you can weather those moments a solid interesting read is what you are left with.

Having said all that, and having been attentive to Rebecca Weeks through input here, it leaves me to ponder the fate of historical period pieces in the time of WBD and Mr. Zaslav. Those types of detailed and expensive storytelling might be far & few for the foreseeable future. We hope for more works like DEADWOOD, BOARDWALK EMPIRE, TREME, and BAND OF BROTHERS to pull us into their histories. We too can count on strong historical accuracy from them simply because the old maxim still applies now as it did then – “HBO. It’s not just TV.”

Two places to seek out “History by HBO: Televising the American Past” by Rebecca Weeks are Amazon and The University of Kentucky Press.