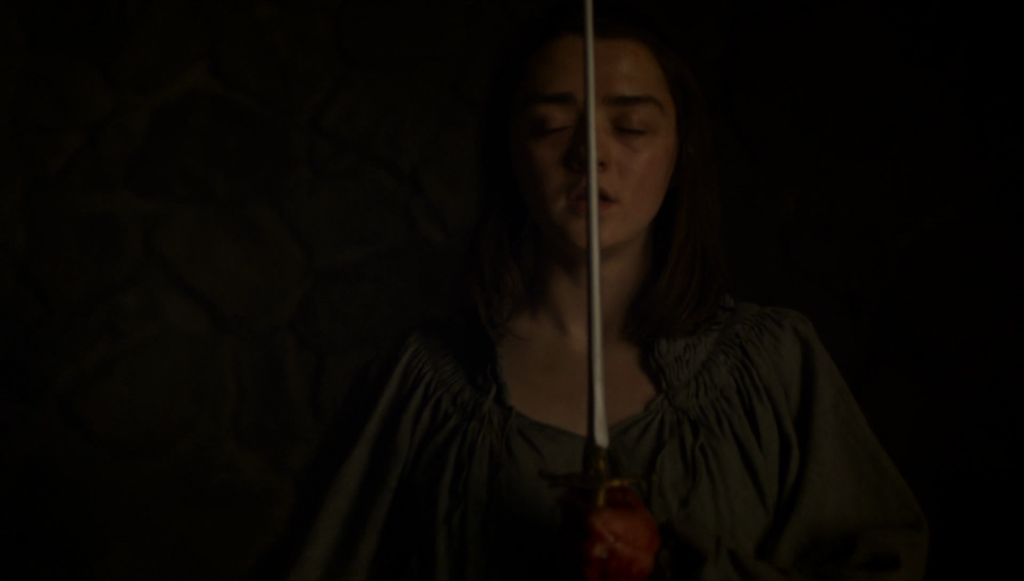 This week’s episode of Game of Thrones, like many this season thus far, has set the stage for the great battles to come. Yes, some ended quite anticlimactically, namely the siege at Riverrun, Arya versus the Waif, and even the highly anticipated “Cleganebowl” between The Mountain and The Hound, thanks to Tommen’s elimination of trial by combat. Still, we got a taste of the battle at Meereen this week, complete with fire-wielding catapults, and lest we forget the White Walkers ominously planning their attack in the backdrop. Here’s a breakdown of this week’s episode, “No One,” and how it will likely impact the schemes and bloodshed to come.

“A girl is Arya Stark of Winterfell, and I’m going home.”

I may be tackling the episode backwards here, but there is no denying “No One” is Arya’s episode, hands down. After her refusal to assassinate Lady Crane—and paying the price for such with several stab wounds to the stomach—she has finally found her way again. Serving the Many-Faced God is of no concern to her anymore, admitting to Crane she’d like to travel west of Westeros, and eventually to Jaqen H’ghar that she’s returning to Winterfell. The worst internship in the history of Game of Thrones is finally over, and there was seemingly little payoff for it. Arya may have become a better fighter and perhaps more self-aware, but her experience in Braavos was hardly worth spending so much time over. At long last, we can all breathe a sigh of relief as Arya begins her journey back towards Westeros for another happy Stark family reunion. (Hopefully.)

“I’ve killed you once before. Happy to do it again.”

Last week’s episode introduced us to the wise and kind Brother Ray, and in classic Game-of-Thrones-style, he was hung and mutilated along with the rest of his congregation by the end of the episode, leaving only a murderously angry Sandor Clegane out for blood. Clegane’s reintroduction to the series is a strange one, because it is seemingly directionless at this point. He enacts his vengeance by the episode’s end, not to mention the highly rumored fan theory that he will battle his brother, The Mountain, in a trial by combat, will no longer be occurring. We can all thank King Tommen for that. It almost makes me wish we still had bloodthirsty Joffrey on the Throne. (Almost.) At any rate, The Hound is always one to provide dark-humored comedic relief, so we have loads of passive-aggressiveness (along with actual gory aggressiveness) to look forward to as long as he’s around. Another encounter with Arya would definitely be interesting, so here’s to hoping that’s not just wishful thinking. 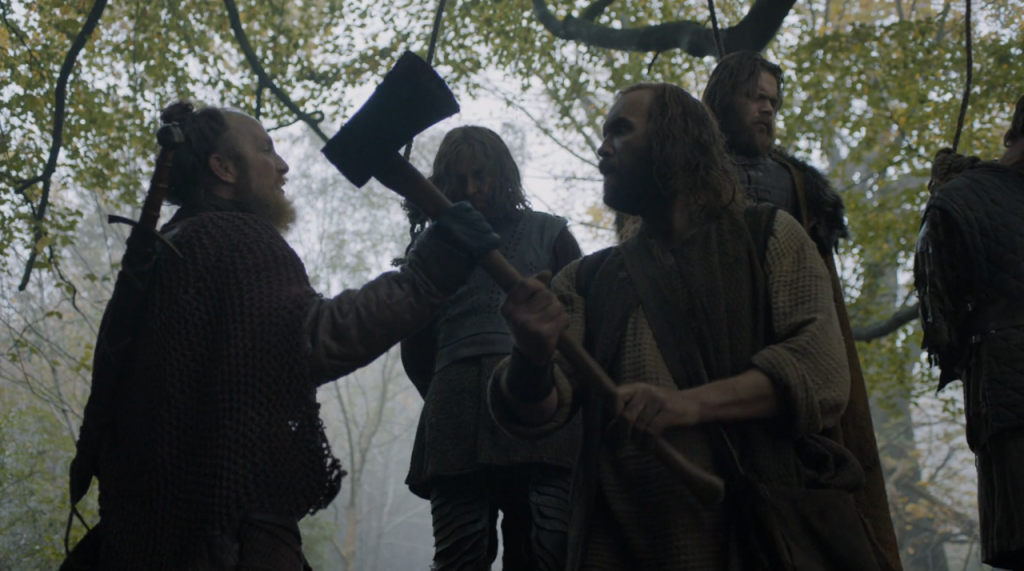 “Seven Blessings to all.”

As aforementioned, King Tommen murdered many fans’ hopes—my own included—for “Cleganebowl,” AKA an epic trial-by-combat showdown in King’s Landing between The Hound and his brother, The Mountain. The High Sparrow has officially taken over King’s Landing with Tommen as his pawn, and unsurprisingly, he’s attempting to make the city as dull as ever, with his first motion being the elimination of trial by combat throughout the Seven Kingdoms. Cersei is clearly displeased with the situation, now that she’s scheduled to have a civil trial before Seven Septons rather than having The Mountain decapitate anyone else that defies her. Still, Cersei is arguably the most cunning and manipulative woman in all of Westeros, and with Jaime still doing everything in his power to protect her, it isn’t unlikely for her to find a way out this situation. Perhaps we may see the Cleganebowl come to life after all. 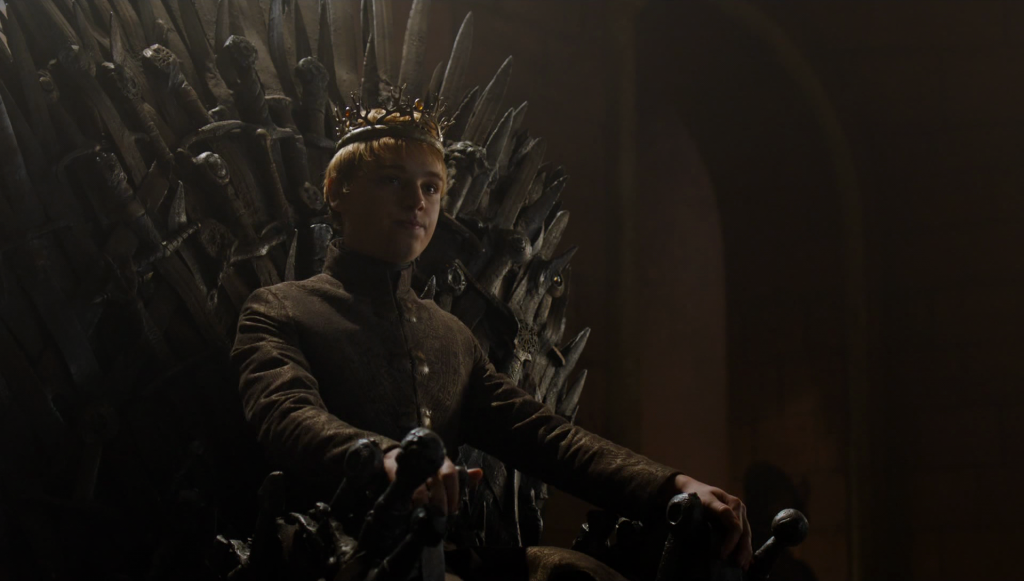 “The things we do for love.”

Another major letdown in “No One,” aside from King Tommen’s declaration, was how dully the events at Riverrun turned out. The anticipated build-up for battle was cut short by Jaime’s orchestration of using Lord Edmure to storm the castle. We only hear of Blackfish being killed in battle, though unfortunately, no such bloodshed occurs on-screen. (Side note: Is Game of Thrones making viewers exceedingly bloodthirsty, or is it just me?) That is not to say everything occurring in Riverrun was lackluster this week, as we see Jaime in top form, taking control of the situation by using Edmure as his pawn to take back Riverrun rather than going into battle. We also see a gorgeously touching scene between him and Brienne prior to this, as they discuss the plight of the city and Brienne attempting to return Oathkeeper to him, to which he responds, “It’s yours. It will always be yours.” Rarely has Jaime ever shown this much care and affection to anyone else in the Seven Kingdoms (Cersei aside) and we see the same affection in his eyes as Brienne sails away after the siege at Riverrun. This is about as joyous as Game of Thrones ever gets, and chances are, it won’t last. After all, winter is coming. 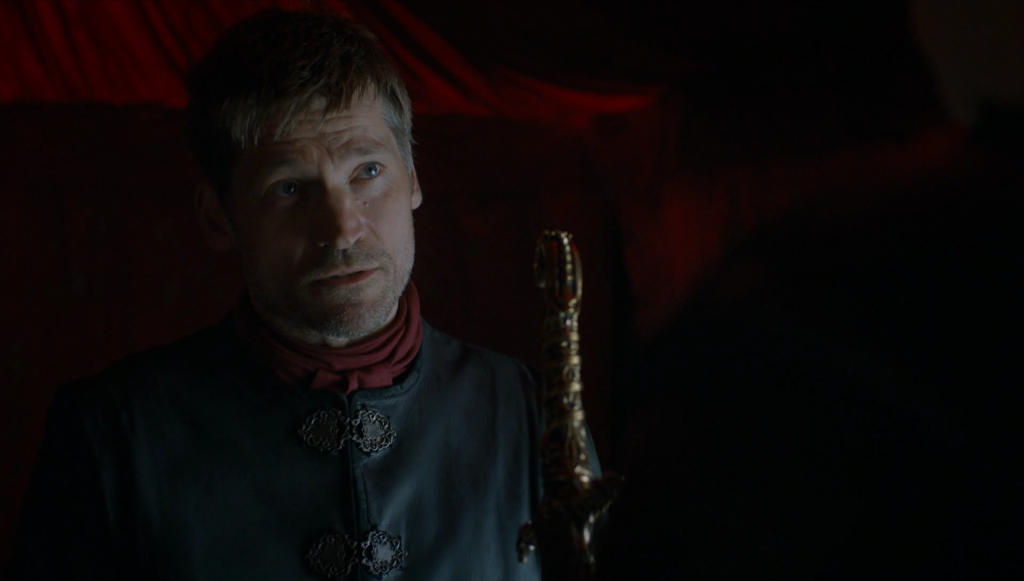 “The masters have come for their property.”

The most promising and undoubtedly exciting scene in “No One” is the start of the battle at Meereen, as the Masters of Yunkai and Astapor return and begin their attack on the city. An enormous fleet arrives, yielding flaming projectiles at the Pyramid, promising an epic battle to come. This comes as no surprise, considering how comfortable Tyrion, Missandei, and Greyworm have grown in recent episodes, going as far as exchanging jokes and drinking wine together before the attack. Greyworm is quick to take control of the situation—after giving Tyrion a big I-told-you-so—and they prepare to be overtaken before an angry-looking Dany arrives on Drogon in her typical deus-ex-machina fashion. She’s clearly upset, as any queen would be after returning to her city and finding it in flames, but the events at Meereen are clearly back on track with Dany and Drogon back in the picture. The Battle at Meereen is a long time coming, and will hopefully provide the bloody payoff we didn’t get at Riverrun. (Did I mention how bloodthirsty Game of Thrones has made me?) 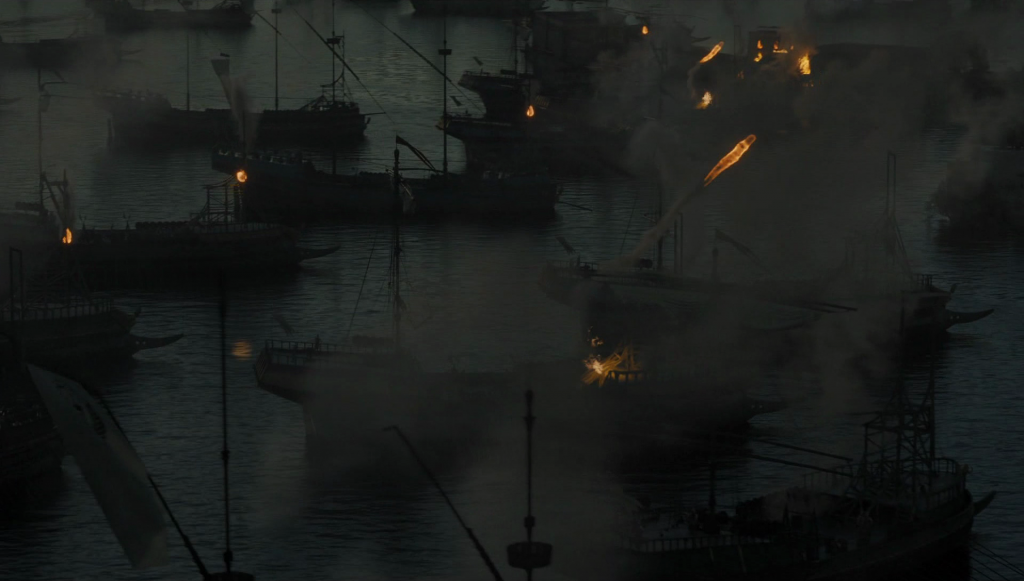 Ultimately, “No One” was one of the weaker episodes of season 6, but it provided some resolution and the foundation for the trials and tribulations each character in the series will soon face. A sense of finality is looming in the series, and as long as Game of Thrones stays true to its roots, we’re in for a spectacular experience with the final two episodes of the season.